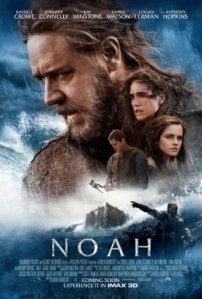 I think I may have just given myself a year’s worth of nightmares as a result of this double feature I just endured: Darren Aronofksy’s Noah and Wes Anderson’s The Grand Budapest Hotel.

(Seriously, for once in the short history of this wee ol’ blog I toyed with the idea of just going to bed right now as opposed to trying to digest what I just saw … yet, here I type …)

I actually enjoyed (sort of … I think) Noah, which basically turns the outline of the Old Testament tale of a prophet who builds a big boat to save his quirky family and a sampling of every animal on the planet into a Lord of the Rings super-size fantasy epic.

God love Russell Crowe (literally) who is the only reason to see Noah. He gives this epic gravitas and heft, and, coupled with Aronofsky’s sly allusions to ecology, animal rights, and humanitarianism, he reminded me that the Bible is an allegory, not to be taken in slavish literalism, but as poetic metaphor for how we need to treat our planet and each other with respect and kindness. Just sayin’.

There is a shipload (literally) of unconvincing CGI effects, some painful emoting from Harry Potter‘s Hermione (Emma Watson), some bad eyebrow furrowing from Crowe’s perpetual “movie wife” Jennifer Connelly, and a number of multi-limbed rock creatures doubling as fallen angels (but looking more like cast-offs from the last Transformers flick).

What does work are Aronofsky’s explorations of man’s chronic insensitivity to the environment and all its denizens, Aronofsky’s metaphorical musings on humanity’s arrogance to believe “God” has somehow given us “dominion” over all living creatures, and Crowe’s heartfelt perplexity over a world (and a deity) that seems rife with cruel hypocrisy. 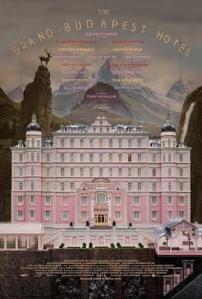 On the other hand, Wes Anderson’s Grand Budapest Hotel just gave me a colossal headache. Between the Sunday funnies-style cinematography and the twee, “aren’t-we-precious” Keystone Cops antics, I quickly reached an apex of just not giving a fig as to what was  transpiring onscreen. The slight narrative relates that a concierge (Ralph Fiennes, surprisingly funny) has inherited a highly appraised painting from one of the hotel’s guests (and a former concubine of Fiennes).

Said painting becomes a source of various hijinks as assorted characters (including a so-so Adrien Brody and a slightly better Ed Norton) try to reclaim the work of art in question.

Perhaps I was just worn down by all the sturm und drang of Noah, but I felt like jumping out of my skin while sitting through The Grand Budapest Hotel. Every aspect was so tortured, darling, overdone, cute that I could barely stand another scene. I felt positively itchy watching it.

I may add to this blog entry in the light of day tomorrow, but right now I’m just tired. Good night, all. (It’s rather sad that I could find more to say about Muppets Most Wanted than a Biblical epic and a highly anticipated art film.)

So, this is what I was struggling to say last night, and just now it hit me like a bolt of lightning (not the supernatural but the human kind).

I have long struggled with both Anderson and Aronofsky as filmmakers, though I was never quite sure why. I loathed Black Swan, found The Fountain interminable, and thought The Royal Tenenbaums was the fever dream of my cloying “magnet” middle school classmates.

Both directors are blessed with distinctive voices; however, they are so wrapped up in the style of their films (cinematography, costumes, music, arch acting/writing) that we as audience members struggle to invest in the people, whether in the characters or in the filmmakers themselves. Further, both directors seem to be challenging their viewers to try to enjoy what they’re watching; it’s like Anderson and Aronofsky are standing on the cinematic playground screaming “Neener neener neener! I dare you to like this … or to even suss out what the heck is going on!”

That art of alienation is all well and good, but, when it is wrapped in what appear to be big-budgeted attempts at popular entertainment, it comes across sophomoric and kinda mean.

34 thoughts on “Two by two … what did I just do to myself? Noah AND The Grand Budapest Hotel”