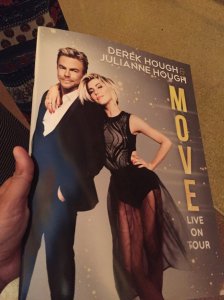 So, for those of you hoping for a review this week of, say, Marvel’s Ant-Man or even Amy Schumer’s Trainwreck? You are getting neither.

Nope, you are getting an (albeit brief) overview of Mormon siblings/Dancing with the Stars alumni Derek and Julianne Hough’s Move Live dance extravaganza at the Fox Theatre in Detroit. 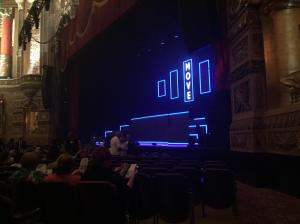 Yup, you read that correctly. 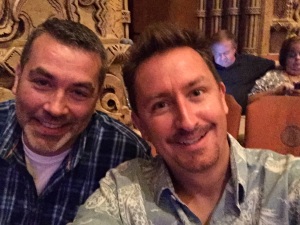 John’s birthday present this year consisted of tickets to tonight’s show, given that last year ago he saw Derek on an episode of MTV’s Ridiculousness and got a kick from the Y-chomosomed Hough’s joie de vivre. And I, being the nice, thoughtful soul that I am, bought us tickets. 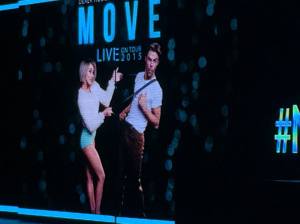 So, how was it? Not bad. In a Donnie-and-Marie-meets-Magic-Mike-why-are-we-still-so-weirdly-repressed-it’s-2015 sort of way. It’s basically a two-hour episode of DWTS with blessedly little commentary and a few too many inspirational pep talks, all glitz and glamor, fox-trots and lip syncing – a K-Tel cornucopia of pop music and flash-dancing. 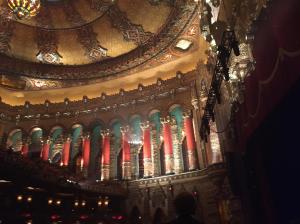 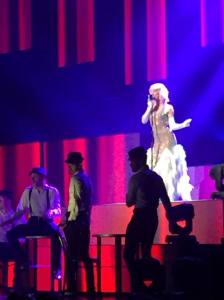 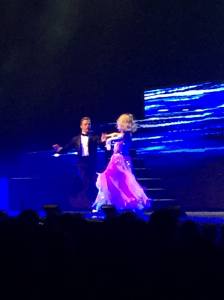 Back to the show? It is so Branson, Missouri-meets-Baz Lurhmann that I kinda dug it. Move Live is high-energy, filled with up-to-the-minute pop hits, and the Hough siblings can move – no pun intended. Hence, the show is aptly named.

Downside? Julianne (d*mn painful in one of the lead roles in the recent film adaptation of Rock of Ages) insists on singing. A lot. And her voice (charitably put) is like hearing two latex balloons rubbed together. Someone needs to intervene.

However, as a dancer, Julianne is divine … albeit she does remind me of desperate-for-validation cheerleaders with whom I went to high school, so I found her a wee bit exuberantly repulsive at times.

(Some of those aforementioned cheerleaders are firmly in the camp of those who think “pig wrestling” is really awesome now, so that didn’t much help Julianne’s cause. My worlds are colliding in a really unfortunate way this evening.) 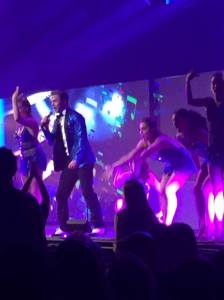 Derek on the other hand is pretty darn charming. I hadn’t warmed to his gifts from that one episode of Ridiculousness, but, watching him in Move Live, I thought, “Yeah, there’s a star. He has the face of a rat and the body of Michelangelo’s David, but that’s a star.”

Derek sang as often as his sister, and, while his voice isn’t going to put Andrea Bocelli out of work, it’s stronger than Julianne’s.

He also has an engaging presence that had the DTWS-sycophants in the audience eating from the palm of his hand. 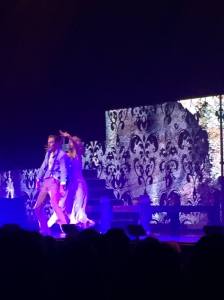 The numbers ran the gamut from Bruno Mars’ au courant “Uptown Funk” to Christina Aguilera’s pastiche “Candy Man” to Elvis Presley’s moldy chestnut “Jailhouse Rock.” All were delivered with a polish and a joy that one only sees in a Broadway-caliber musical revue. 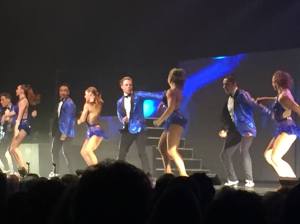 My snide sh*tty snark aside, the Hough siblings are really d*mned adorable, and I enjoyed myself greatly. I felt like I’d time-traveled to 1979, watching a super-special, family-friendly episode of Solid Gold, starring Donny and Marie, The Carpenters, and Captain and Tennille. 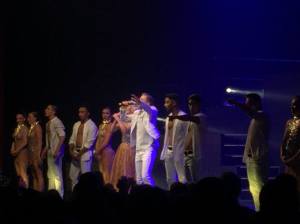 And you know what? That’s just fine. If that’s the niche these fabulously talented siblings are destined to fill, then I dare say that this sad and troubling era could use a touch of their Me Decade-inspired sparkle.

5 thoughts on “La Cage Aux Mormons: Derek and Julianne Hough and The Move Live Tour at the Fox Theater, Detroit”