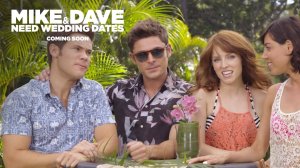 I daresay we see too many Zac Efron movies in our household (evidence here and here and here). Perhaps an intervention is required. His cinematic output is not exactly transcendent, but it ain’t bad either. Efron has become the poster boy for pleasant-diversion, middlebrow-comedy, derivative filmmaking. And I suspect it’s a lucrative and easy life, with just an inordinate number of sit-ups and bench-presses required.

Efron can sing. He’s cornered a unique underdog, alpha-himbo comic niche. He’s man-pretty, in a distracted, dissipated, vacuous way. He can dance. Before the advent of sophomoric gross-out rom-coms, he would have probably been John Davidson. (If you’re under 40, Google him.)

But here we are. Mike and Dave Need Wedding Dates. We saw it, ‘Murica, in a need to go see something stupid and funny and palate-cleansing after a busy theatre month. And it did the trick.

Throw Wedding Crashers, Romy and Michele’s High School Reunion, Bridesmaids, Meet the Parents, and an episode of Animaniacs into a Cuisinart, and you’d get something approximating this flick. And that’s not a bad thing, because, what all of those influences have at their core (beyond the Post-Its and the poop jokes) is an inherent sweetness, an appreciation for the absurdity of the human condition, and a wily distaste for both the clusterf*ck ostentation of modern weddings and the phony pretense of “growing up.”

Based on a hyperbolic “true story” as can only exist in post-millennial internet-obsessed America, Mike and Dave tells the story of the Stangle Bros, puckish siblings locked in a self-destructive cycle of privilege, self-absorption, and arrested development. You see, these boys, as played by Efron and Pitch Perfect‘s Adam DeVine are sawed-off li’l Hollister-wearing muscle jocks whose daily life is spent in package liquor sales and whose evenings are occupied trying to make family gatherings more fun through a healthy heaping of fireworks, chemical influence, and general mayhem.

We all know these guys. They view themselves as not just the “life of the party” but the party itself, not realizing they leave scorched earth, tears, and exhaustion in their wake – their pursuit of spontaneity at all costs actually driving everyone in their orbit into increasingly rigid anxiety. The film sets this up in a clever way with an opening credits montage demonstrating the Stangle Bros’ “fun” like a glammed up highlights reel from the Jackass television show, juxtaposed later in the film with a grainy, home-movie montage showing what really happened.

The boys’ beloved sister Jeanie (Sugar Lyn Beard, a comic elf with nitroglycerine in her veins … hope she gets more work!) is getting married in one of those cost-prohibitive, vulgar “destination weddings” only seen in film … or on Facebook. Given the brothers’ propensity to ruin everything, Jeanie, her fiance (Sam Richardson, a wry and reserved powder-keg), and parents (the always dependable Stephen Root and Stephanie Faracy) insist that Mike and Dave bring actual dates to this event, under the false assumption that having women to “monitor” their foolish impulses will make any difference at all.

Of course, this being the world in which we now live, Mike and Dave post an ad on CraigsList (nothing bad ever happens via CraigsList, eh?), and a pair of lightning rods Alice and Tatiana answer the call (chiefly because they want the free trip to Hawaii). Into the Woods‘ Anna Kendrick (as Alice) and Parks and Recreation‘s Aubrey Plaza (as Tatiana) are dynamite. I don’t think I could (or should) go so far as to suggest this trifle of a movie is feminist, but the way these two rip up the screen and any shred of dignity the brothers have left is a sight to behold. Needless to say, they do not take to their roles as “baby-sitters” and proceed to demolish the nuptials in ways the boys could only dream about.

Plaza particularly is a revelation, her banjo eyes and sardonic delivery bespeaking a world of hurt that someone so young should not yet have experienced. And don’t get me wrong, there is no poignancy in Mike and Dave Need Wedding Dates – like zero, like no attempt even made – but Plaza (and Kendrick too) do great work beyond the thin confines of the script to represent fully developed if utterly misdirected minds onscreen, giving the film a lift and, dare I say, import that is likely 100% accidental.

Oh, and the film adds a meddlesome cousin (Terry), who seems to exist simply to provide unnecessary narrative complication, but Alice Wetterlund (who could play Kate McKinnon’s sister) tears into the role with a fire that is delightful and necessary. The raging Id to Mike and Dave’s SuperEgo. She sizes up the boys’ wedding ensembles, reducing them to ash with one of the funniest lines in the film: “That outfit looks like Jimmy Buffett’s dust ruffle … or the wallpaper in a Long John Silver’s bathroom.”

There are about three cringe-worthy scenes, the kind which always seem to be plopped into these enterprises solely to create Tweet-worthy shock value, all easily excised when aired on TBS in two years. Just muddle through those sequences, and focus on the sparkle at play between Plaza and Kendrick and the way their work enhances and critiques the more heavy-handed bro-comedy of, say, DeVine, in particular. Efron remains a cipher in his own film, and I think that’s a conscious decision on his part. He is funniest in befuddled observation, and he has a lot of that to do here.

Now, if only Hollywood had been brave enough to make Alice and Tatiana DON’T Need Wedding Dates. I’d RSVP for that. 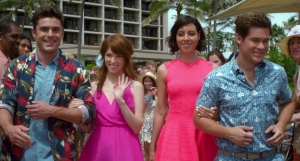 7 thoughts on ““That outfit looks like Jimmy Buffett’s dust ruffle … or the wallpaper in a Long John Silver’s bathroom.” Mike and Dave Need Wedding Dates”