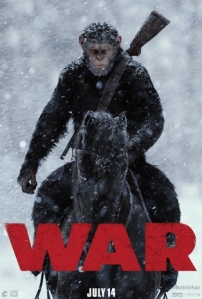 “When fascism comes to America it will be wrapped in the flag and carrying a cross.”

Beginning with Rise of the Planet of the Apes in 2011 and continuing with Dawn of the Planet of the Apes (2014), 20th Century Fox effectively rebooted the campy Charlton Heston 60s film series as the thinking person’s summer popcorn franchise – the kind of smart fare which fulfills the original aim of early science fiction writers to craft instructive, cautionary allegories against humanity’s baser nature. The prequel trilogy comes to a powerful and timely close with this summer’s War for the Planet of the Apes, wherein Caesar and his band of highly evolved simians take their final stand against a rapidly devolving humankind.

Andy Serkis returns via motion capture performance as the sensitive and haunted ape leader Caesar. It is an absolute crime that the Motion Picture Academy has not had the wisdom to honor his work somehow. His Caesar is more fully realized, more affecting that about 90% of the flesh-and-blood performances we see in most Hollywood blockbusters. C’est la vie. 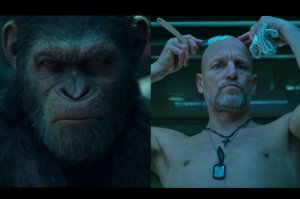 Facing Serkis’ Caesar and delivering one of the best, most nuanced performances of his career is Woody Harrelson as the Heart of Darkness-inspired “Colonel,” a demagogue whose preoccupation with humanity’s impending obsolescence has led him to twist evangelical faith and jingoistic patriotism into a toxic stew of runaway fascism and military brutality. Oh, and he wants to enslave Caesar’s apes to build a big wall. Um, yeah.

(At one point, one of Caesar’s ape followers asks earnestly, “Why do they need a wall?” It gets a knowingly uncomfortable laugh from the audience, and there is a deliciously ironic plot point that hinges upon said wall which I dare not spoil.)

Believe it or not, the film is more subtle than what I’ve described might lead you to believe, and returning director Matt Reeves, working from a script co-written with Mark Bomback, refuses to supply the audience easy answers or melodramatic villains to boo and hiss. Caesar admittedly walks a higher ground, hoping to avoid bloodshed but realizing that pacifism will be impossible in the face of a humankind that fears what it does not understand and responds to its loss of privilege and hegemony with blind rage.

The Colonel, on the other hand, witnesses his family and friends literally losing their powers of cognition and speech, sliding into oblivion as a result of the “simian flu” that wiped most of humanity off the globe in the prior film. His hate-filled futility is as heartbreaking as it is maddening, as relatable as it is horrifying. He loses his own humanity in pursuit of preserving Humanity writ large: he is a man who sees empathy as a tactical flaw and who thinks there is no worse insult than “so emotional” (which ironically he hurls repeatedly at Caesar, a “damn dirty ape”). Kudos to the filmmakers and to Harrelson for the bravery of this depiction. 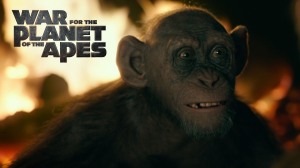 As atmospheric and philosophical as the film is, however, it is still a movie about talking monkeys after all and, as such, remains crackling entertainment.

Steve Zahn is a welcome new addition as “Bad Ape,” a skittish but wise chimp whose survival instincts lead Caesar both straight into danger and then right back out of it. Any comic relief in the picture – there ain’t much – comes from Zahn, one of Hollywood’s most underrated players, as a Yoda-esque hermit who would prefer to hide in the ruins and survive off mankind’s detritus. It’s a warm, soulful, and funny performance, and another that I wish could be remembered open-mindedly at Oscar time.

Whether you struggle with a societal hierarchy that blithely deems mankind the highest rung of the evolutionary ladder or with a world wherein aggressive self-preservation too often seems the only order of the day, you will find resonant themes in these 21st century Planet of the Apes films. Yes, they are summer escapist fare but they are also disturbingly prescient, and, if we want them to remain “escapist fare,” we should probably all change our ways posthaste.

10 thoughts on ““Why do they need a wall?” War for the Planet of the Apes”