It’s unusual that I don’t post a review almost immediately upon seeing a film. In part, the recent Thanksgiving holiday was the culprit for me not posting a review of the film adaptation Life of Pi sooner…but I also wasn’t sure what I thought of the movie until today. In fact, I am still not exactly sure.

I left the theatre thinking, “Well, that was ok, not great.” The next day, I hated the movie (chiefly for the sunlit depictions of animal-on-animal violence), but now I feel differently. I actually think I like the ambiguity with which the film leaves its viewers.

And, no, I did not read the book…seems to be what everyone asks me when I am ambivalent about a cinematic adaptation of some contemporary literature. [See: any reaction any friend of mine has ever had to my utter distaste for the Twilight franchise.]

Life of Pi is a beautiful film. Director Ang Lee has done a sumptuous job creating the cinematic equivalent of a lushly illustrated children’s book – though I’m not entirely certain it serves the narrative well. In 3D, the sparkling visuals literally leap from the screen, but the ViewMaster quality of such stereoptic spectacle may mislead viewers into thinking the film is a fun holiday family jaunt. It ain’t.

The movie grapples with issues of faith, humanism, animal rights, gender and class politics in an allegorical melange that at times evokes Aesop’s Fables by way of Sigmund Freud. In short, Life of Pi details the adventure of a young Indian boy trapped at sea on a lifeboat with a ravenous tiger. Hijinks ensue.

The “did they/didn’t they” questions of whether the tiger (and a few other animals) are real or imagined and whether they are actually symbolic of man’s inhumanity to man are ultimately unresolved, leaving it to viewer discretion. That is no doubt what the book’s author Yann Martel intended. However, as a cinematic exercise, the movie somehow finds itself at the difficult crossroads of simplistic AND abstruse.

I find myself still pondering the questions raised about faith, the divine within us all, the power of nature, and the pure equality of all living creatures. In that sense, Life of Pi works a kind of big budget, “Hollywood blockbuster as art film” wonder. Yet, I haven’t made up my mind if Ang Lee has achieved an amazing hat trick in filming the supposedly unfilmable…or if he completely missed the mark with this CGI-filled epic.

I guess I will have to get back with you on that one.

Maybe this is one of those times when I should have heeded my friends’ query: “Did you read the book first?”

Whether or not Steven Spielberg intended his latest film Lincoln to serve as a finely crafted allegory for our contentiously political times, it very much is one. The movie succeeds on multiple levels, not only allegorical but also as instructively engaging historical psychodrama and crackerjack cinematic entertainment.

Daniel Day-Lewis as the titular American president is warm yet flinty and infinitely watchable in yet another amazingly chameleonic performance in his long and storied career. He manages to evade the trap of most historical biopics – he is neither overly reverential nor artistically self-indulgent. And he is most assuredly not some wax figure in Disneyland’s “Hall of Presidents.”

Day-Lewis’ Abraham Lincoln is a fully realized, at times lovable, always affecting flesh-and-blood creation. I challenge anyone to read about Lincoln after watching this movie and NOT hear Day-Lewis’ voice in your head or visualize the mischievous, twinkly fire in his eyes.

The film is set against the backdrop of the Civil War (no shock there) and focuses on the political machinations required to have the 13th Amendment pass the House of Representatives, where it has been stuck for the better part of a year. Lincoln realizes that, if the Civil War ends before the Amendment’s passage, he might not ever amend the Constitution to prevent slavery forevermore.

Needless to say, Beltway (was it called the “Beltway” in those days?) backstabbing and hijinks ensue, and anyone who has lived in America in the past twelve years will reflect  “the more things change…the more they stay the same.” Neither Spielberg nor screenwriter Tony Kushner proselytize (though there is speechifyin’-a-plenty) but the ugliness of watching entitled white dudes debating the finer points of social issues for which they have no real skin in the game is like deja vu all over again.

The supporting cast is a who’s who of America’s finest players, from always delightful David Strathairn to a gonzo-fun James Spader who seems to be channeling Robert Downey, Jr., at his most drug-addled. Lee Pace of ABC’s short-lived Pushing Daisies is fun as a posturing, preening Congressman opposed to the Amendment, and Jackie Earle Haley continues his run of great late-career performances as the peace-seeking Confederate Veep, literally left cooling his heals on a riverboat as Lincoln pushes the Amendment through.

Sally Field as Mary Todd-Lincoln is adequate, and I’m not sure if her part was a bit underwritten or if I have just seen her return to the same actorly well a few too many times. Kushner seems to be channeling a postmodern perspective on the Lincolns’ marriage/family through every bit of Field’s dialogue, and she does yeoman’s work making it sound natural but at times it still seems stilted.

The film also suffers from about four endings too many. We know what happens to Lincoln in the weeks and months following the Amendment’s passage, and, trying to cram all of that detail into what is more-or-less an extended diorama-like montage at the film’s conclusion detracts. And, of course, Spielberg can’t help but include his trademark fairy tale mythologizing here and there – it is ok, but the film is so strong otherwise that I could have done without those vintage touches.

But the best moments of the film come at the hands of two old pros who don’t share a minute of screen time: Tommy Lee Jones as Abolitionist Thaddeus Stevens and Jared Harris as Ulysses S. Grant. Both bring gravitas and pixie dust to their roles, more than holding their own with Day-Lewis. Their characters leap from the pages of history books and very quickly feel like people you have known personally for years. Absolutely remarkable work here.

Skyfall, the 23rd “official” James Bond film, is about as perfect an escapist adventure film as I’ve seen. By the way, the spoofy, 60s Casino Royale and the unauthorized Thunderball remake Never Say Never Again don’t count in the sanctioned tally of Bond films…BUT, if they did, that would make for a nifty 25 films in 50years…ah well.

I did not get a chance to see Quantum of Solace, which, from what I understand, was a wise choice, but I adored Daniel Craig’s first Bond outing Casino Royale. That would be the serious, gritty one with the villain who cried blood while gambling…ewwww. To my mind, the actorly, rugged Craig is the perfect Bond, barely masking what appears to be contempt for and occasional bemusement with a world gone horribly awry as he kicks said world in its collective teeth.

This latest film fires on all cylinders – action, drama, emotion, and even a bit of comedy. The comic moments blessedly never veer into high-camp Roger Moore territory… there are more than a few clever allusions, however, to the goofy charms of early films in the series. Director Sam Mendes brings gravitas to the proceedings, working with screenwriters John Logan, Neal Purvis, and Robert Wade to give us a backstory for 007 that leads to a powerful, engaging, and rather heartbreaking finale. The film owes a bit of its DNA to classic cat-and-mouse thrillers like Charade as well as more recent popcorn fare like Silence of the Lambs (for its villain’s creepy plexiglass cell escape) and The Dark Knight/Dark Knight Rises (with its backdrop of have/have not inequality that supercharges social anarchy against a flawed social system). Ensemble players Judi Dench, Ralph Fiennes, Albert Finney, Naomie Harris, Ben Whishaw, and Helen McCrory are all reliably excellent – what a cast!

But beyond Craig’s nuanced, charmingly surly performance, supported by a dream BBC miniseries-style cast, what is the film’s best “special effect”? That would be none other than Javier Bardem. He internalizes the epic, broadly drawn supervillainy of previous Bond antagonists, turning it into a charmingly twisted, Freudian pretzel of a characterization. Bardem’s Silva is fascinating, transfixing, and utterly relatable/revolting. The chemistry between Craig and Bardem is electric. Don’t miss this one, folks. Smart, sharp fun. 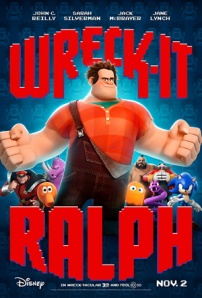 Does Disney’s latest animated foray Wreck-It Ralph live up to the peppy pixelated promise of its retro fun trailer? Not quite. Is it an enjoyable pre-holiday diversion with a lot of heart to accompany its endlessly merchandisable premise? Absolutely.

A shameless amalgam of Disney’s own Toy Story, Who Framed Roger Rabbit?, and Tron, this film deftly imagines a world in which video game characters (from across thirty years of canon beloved by Gens X & Y, Millennials, and beyond) live, laugh, argue, and play after the neighborhood video arcade takes its last round of quarters for the evening. Clever touches and pop cultural references abound, with the Donkey Kong-esque titular character Ralph, warmly voiced by the ever-reliable John C. Reilly, trying to shake off three decades of villainy to gain acceptance from his digital cohorts.

The film has a bit of a rambling quality that occasionally makes it seem longer than its brief 90-minute running time. However, all threads add up to a meaningful and (nearly) moving denouement. As Ralph ventures across a number of video game settings in search of exoneration, he meets a cast of fully-realized, quirkily lovable characters voiced beautifully by the likes of Jane Lynch, Sarah Silverman, Alan Tudyk (sounding eerily like Alan Sues, who portrayed a very similar character in 1977’s Raggedy Ann and Andy: A Musical Adventure), Jack McBrayer, and Edie McClurg.

The movie is fun but not overly funny, warm but not always engaging, clever but not always smart. If, like me, you still have your Atari 2600 in the basement…if, on a rainy day, you plug it in for a heated round of Frogger…if you have ever wondered what those miraculous constructs of “1”s and “0”s are up to when said console is on its shelf, then, you will bask in the arcade-lit glow of Wreck-It Ralph. However, you will probably also reflect back on how much more robust were your own childhood imaginings of characters like Q*Bert or Inky, Blinky, Pinky, and Clyde.

P.S. Making Wreck-It Ralph a must-see is the animated short that precedes it: Paperman. A gorgeously black-and-white, seamless blend of traditional and computer animation, the piece tells the tale of a young man smitten with a young woman he briefly meets at a train station and how he reconnects with her through the persistent, magical aid of a fleet of pesky paper airplanes. Sounds silly? You bet. Will the music and the lovingly drawn characters bring a tear to your eye? Count on it.