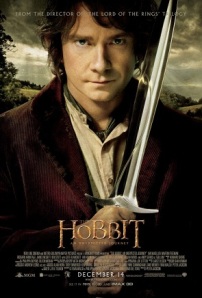 It is unlikely I will ever sit through any of them again.  I realize for devotees, those films’ slavish attention to all J.R.R. Tolkien’s elvish detail is heaven. To me, these epics are a bit of a slog. A beautiful, entertaining, transporting…slog.

However, I love fantasy films, and, as you may have guessed, I’m a sucker for the over-hyped, over-marketed, blockbuster holiday “event film.” Hence, I just got back from Jackson’s prequel The Hobbit: An Unexpected Journey.

If I feel the original trilogy – where one film = one book – seems a bit padded, you can imagine my distaste for having The Hobbit broken into a wallet-gouging three films.

I think this movie is too long by half, and I really wish the filmmakers had taken advantage of the inherent efficiency cinematic adaptation can bring. So much can be implied – it doesn’t all have to be seen, from every troll sneeze to goblin burp, from endless clanging broad-swords to stampeding orcs.

(I was going to jump out of my skin if there had been another lingering “Hobbit-shire-as-done-by-Restoration Hardware” set-up shot.)

However, something magical happens at the mid-point of the film, just when I had all but checked out: Andy Serkis’ marvelous motion capture creation Gollum appears in a compelling sequence that brings out the best in Martin Freeman’s performance as the titular Hobbit, Bilbo Baggins. Before that point, all of Freeman’s twee mugging and campy double takes had me longing for Elijah Wood’s vapid blue-eyed gaze from the original trilogy.

In those scenes, where Freeman is exchanging obtuse riddles with the frog-like Gollum, our protagonist has charm, wit, and palpable cold-sweat-anxiety like a baby Hobbit version of Kevin Spacey. I enjoyed him immensely there (and, of course, Serkis as well), and those moments carried me through the rest of the picture happily.

By the way, I adored the animated Rankin/Bass television adaptation of The Hobbit from the 1970s. I tortured my parents for hours, listening and re-listening to the double LP soundtrack album. No VHS/DVD/NetFlix back then to relive – had to listen to the record in the intervening eleven months while waiting for the annual televised re-run.

Given those fond childhood memories as well as both my hope that Freeman continues to show the twinkly gravitas he displayed in this film’s latter half and my admiration of the ever-delightful Ian McKellen (who looks like he kinda wants to be anywhere else in the film’s opening scenes), I will stick with this series…I just wish it were one film shorter. Enough with trilogies, Hollywood…

7 thoughts on “Not too precious? The Hobbit…An Unexpected Journey”