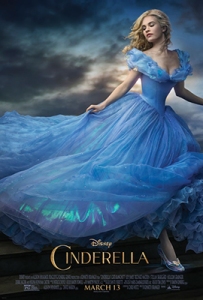 I’m sorry, but Helena Bonham Carter pretty much ruins any and every movie she’s in. Maybe she was good once. I can’t recall. As it is, she just seems like an inept community theatre actor with an inflated sense of self, horrid comic timing, terrible diction, and a propensity for bug-eyed mugging.

There I said it. I feel better (sort of).

As you may recall, I loathed Tim Burton’s needlessly fussy, narratively obtuse, utterly tone deaf reinvention of Disney’s Alice in Wonderland, and Sam Raimi’s journey over the rainbow in Disney’s Oz the Great and Powerful was just as as clunky, misbegotten, and laborious. Disney’s last go-round at reinvention, Maleficent was marginally better, simply because they had the good sense to cast redoubtable Angelina Jolie (and her flawless cheekbones) as the titular fairy/witch/whatever. Maleficent was (at least) attempting to say something interesting about women’s rights, animal rights, human rights, even if it collapsed under the weight of far too-much overbearingly pixelated CGI chicanery. (Sidenote: the less said about the Nicholas Cage-starring The Sorcerer’s Apprentice the better.)

In Cinderella‘s case (Bonham Carter notwithstanding), Disney’s latest attempt to breathe flesh-and-blood life into two-dimensional fantasy gets more right than it gets wrong. Starting with Branagh, the Mouse House has stacked the deck this time with top-shelf talent that knows the best way to super-charge heartfelt whimsy is to bring a pinch of BBC-gravitas.

Branagh’s direction has a steady-hand, using an economy of scale (no overblown special effect sequences here) to re-focus audience attention on actors and story and emotion. (Crazy, eh?) He puts his faith in one supreme “special effect” and that would be Cate Blanchett as Cinderella’s sympathetically villainous stepmother Lady Tremaine.

Blanchett is clearly having a ball in her Joan Crawford-by-way-of-Dr.-Seuss acid green mermaid gowns, casting sparks from her cat-like eyes as the venom practically glistens from her ruby-lined, perfectly-spaced pearly whites. She leaps off the screen as an intoxicating blend of cartoon caricature and pungent pathos.

Does she have a moment or two where she could/should have dialed it back a bit? Oh yeah. Yet, when she and her stepdaughter (ably played by Downton Abbey‘s Lily James) have their final quiet-storm confrontation over one recently discovered (by Blanchett) glass slipper, all Blanchett’s scenery-chewing mishegoss to that point is validated. In fact, the film is worth viewing, if for no other reason, for that one scene, where Blanchett with a sidelong glance and a turn of phrase synthesizes the heartache and turmoil faced by women of any and all generations. Is Cinderella feminist? Maybe. Maybe not, but it sure is in that moment.

James is a fine Cinderella with enough pluck to offset the damsel-in-distress undercurrents that might make modern audiences otherwise blanch. Equally her match is Game of Thrones‘ Richard Madden as her subtly charming prince, a royal who is less polished perfection and more fellow lost soul. When they first meet cute in the woods, she compels him to see hunting as a horror, and I nearly yelped with joy. “Just because you can, doesn’t mean you should,” she pleads. And he agrees.

The rest of the cast from wizened Derek Jacobi as the king to luminous Hayley Atwell (Agent Carter) as Cinderella’s late mother to Stellan Skarsgard as a scheming duke all acquit themselves nicely, though never quite rising above a pedestrian TV-movie-esque malaise that occasionally blankets the sluggishly humorless script. Holliday Grainger and Sophie McShera bring da noise as stepsisters Anastasia and Drizella respectively. They are suitably loud and obnoxious, from their behavior to their Easter-egg-colored attire, and do the work required of them, though a touch more nuance couldn’t have hurt.

Alas, Bonham Carter brings the whole enterprise to a crashing halt during the sequence that should have been the brightest spot. Lifting Cinderella up with magic and hope and beauty and opportunity after she has been so cruelly bullied by her stepmother and stepsisters should be an effervescent, ebullient, and joyous moment.  In Bonham Carter’s mush-mouthed delivery, accented as it is with half-assed hand gestures and under-baked characterization, it’s a slog.

Furthermore, why did they choose not to make this a musical? There aren’t that many songs in the original animated version, and, even though Bonham Carter is a pretty hopeless singer, having that dopey song would have aided her immeasurably, I suspect.

Regardless, the film is sumptuously appointed with costumes and set design. I haven’t seen a movie this beautiful in years. And 90% of the cast gets it so very right. It’s not a great film. Much of it will be forgotten in the light of the next day (not unlike Cinderella’s famed pumpkin coach) but the message repeated throughout (as taught to Cinderella by her dying mother) to “have courage and be kind” is a lesson all of us need, all day every day, regardless our age, background, or station.