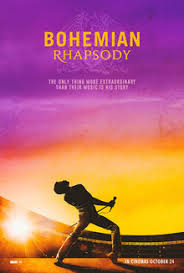 I wanted to love Bohemian Rhapsody. I really did.

One of the first 45s (remember those?) which I bought with my own money was Queen’s “Another One Bites The Dust,” and I wore out many a needle on my little Raggedy Andy record player listening to their day-glo Flash Gordon soundtrack on endless repeat.

That said, is there a rock group of the past 40 years that is more rife with the potential for gonzo, heartbreaking baroque cinematic poignancy than Queen?! Lead singer Freddie Mercury’s out-sized public persona and haunted inner turmoil are ready-made for the kind of swirling epic that is both audience catnip and Oscar bait this time of year.

Much has been written about Rami Malek’s transformation into Freddy Mercury. I’m not sure he quite lives up to the hype. When bandmates Brian May and Roger Taylor (a sparkling Gwilym Lee and Ben Hardy) steal scenes from Mercury, you may have a problem. (IRL, May and Taylor are producers on the film. Go figure.) Malek does compel as a little-boy-lost caught between cultures in love with his voice but at odds with his sexuality and his ethnicity. Yet, he never inspires in the way the real Mercury could with the mere flick of an eyebrow. Malek’s limpid banjo eyes and cumbersome prosthetic teeth are more static Al Hirschfeld caricature than true character development. 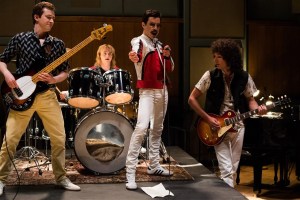 The film is at its playful best when detailing the creation of Queen’s biggest stadium thumpers like “We Will Rock You,” “Another One Bites The Dust,” and the titular mock-opera tune. The ensemble is clearly having a ball playing dress-up and re-enacting Queen’s free-wheeling creative process. There is a fun cameo by Mike Myers as a small-minded producer baffled by the neo-classical camp charms of “Bohemian Rhapsody.” (A sly wink at Myers’ Wayne’s World movie which introduced a new generation to the number, rocketing it up the pop charts once again.) 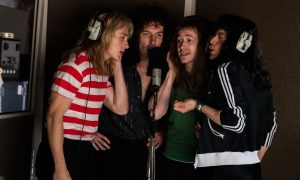 The film is less successful when it addresses Mercury’s challenged and challenging personal life. The film wants to paint this singular misfit as an everyman, a libidinous Warholian svengali for the Jock Rock crowd. It just doesn’t quite work, alas. At one point, the band opines, “It’s America: They’re Puritans in public, perverts in private.” One wonders if that notion didn’t hang up the filmmakers as well.

There is a gut punch of a movie in Mercury’s life, a celebratory cautionary tale about creative spark, sexual impulse, and uninhibited expression. Unfortunately, Bohemian Rhapsody ain’t it. A cheap, slight K-Tel hits collection when a messy, overlong box set was required.

Oh, and, Sacha Baron Cohen, I’d still like to see your version of this story. 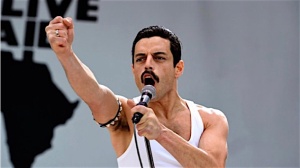