MacArthur’s Park is melting in the dark
All the sweet, green icing flowing down
Someone left the cake out in the rain
I don’t think that I can take it
‘Cause it took so long to bake it
And I’ll never have that recipe again
Oh, no – “MacArthur Park” (Jimmy Webb)

We live in uneasy times. I am beginning to suspect we always have. Maybe it comes with getting older, or maybe it’s the all-consuming nature of modern media, but I now question the golden hue surrounding historical violence for noble causes which we all once read about in our history classes. I fear waking up every morning for what the headlines may bring with my breakfast cereal.

Friday night, my parents and I saw Quentin Tarantino‘s latest auteur epic Once Upon a Time in Hollywood. Saturday, we woke up to news that another in an apparently endless series of twenty-something, white male gunmen had taken it upon himself to drive from Dallas to El Paso to enact a hate-filled, murderous killing spree. Sunday, we woke up to news that a seemingly similar individual decided to do the same thing in Dayton, Ohio. Both men arguably were informed by a steady diet of anger and violence, entitlement and disenfranchisement: all-reaching toxic masculinity. Now, we find ourselves in another mind-numbing news cycle of finger-pointing and empty talking points, American flag lapel pins and “thoughts and prayers,” which will all be quickly forgotten days from now when a royal family member has a baby or a sitting president stirs his simmering pot of Twitter-fied bile.

The sobering theme throughout is that all those deserving blame abdicate any and all responsibility. Hollywood and video game makers say art doesn’t influence people, but merely reflects our present reality. Gun manufacturers say guns don’t kill people, people kill people. Politicians say it is a “complicated” issue and they are looking into it, often blaming a nonexistent mental health safety net they effectively dismantled years ago (through de-funding) and turning a blind eye to the campaign donations they’ve greedily accepted from pro-gun lobbyists and voters. Motivating it all? Myopic self-preservation and a willful desire to keep the gravy train of capitalism rolling along. 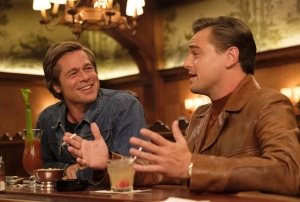 In essence, it is this blood-sticky mess that Tarantino seems to be directly addressing with his film. Tarantino’s own relationship with cinematic violence has seemingly transitioned from sophomoric glee about how low he could go to a genuine conflict over entertainment’s role in fueling our revenge fantasy culture.

Once Upon a Time in Hollywood is an elegiac picaresque tale of a California that may only exist in the mind’s eye: 1969, when Hollywood, and by extension America, was at odds with itself, some of us still clinging to the antiseptic safety of Eisenhower dreams against a countervailing influence of angry young people dissatisfied with a military/industrial complex that generates nothing but hardware and heartache.

A wonderfully world-weary Leonardo DiCaprio as failing TV Western star Rick Dalton finds himself increasingly marginalized, relegated to guest star villainous turns on turgid nightly dramas. The active rejection of the Western as metaphor for American moxie was ramping up, replaced by crime dramas and superhero shows, equally as violent and just as superficial.

At Rick’s side is his stunt double Cliff Booth, played by Brad Pitt, oh-so-charming and oh-so-casually malevolent – a beach bum Marlboro man with a secret history of true-life violence ever percolating under his gleaming exterior as he saunters through the chintzy, cardboard back lots of Tinseltown.  “More than a brother, just short of a wife,” Kurt Russell’s omniscient narrator observes about the duo, characters based in part on the legendary real-life bromance of Burt Reynolds and Hal Needham.

The pair move together in tandem in uncertain waters, a couple of aging sharks whose hollow, posturing machismo is perhaps going out of fashion. The film industry is beginning to embrace a new kind of shallow, in fact: talking a good game about “method acting,” as represented in a crucial scene between DiCaprio and a wise-beyond-her years eight-year-old female actor (“NOT actress … that is a ridiculous term,” she observes) – a scene-stealing performance by Julia Butters. Next door to Rick’s groovy Hollywood Hills home resides a couple symbolic with this sea change, Roman Polanski and Sharon Tate, the latter played with angelic puckishness by Margot Robbie. (I admit Quentin’s filmic attitude toward women remains a bit of a problematic cipher for me, but I’m giving him the benefit of the doubt, for now, in great part due to Kill Bill.)

Anyone who hid a copy of Helter Skelter behind their eighth grade history textbooks to avoid lectures about the great violence that begat this country, only to marinate in the prurient details of the Manson Family, may guess what happens next. The La Cielo Drive home and Sharon Tate herself are synonymous with the sickening nexus of celebrity and serial murder, Hollywood and true crime. Tate is remembered not for her film work, but the gruesome way her life met its untimely end. Well, you may think you know what is going to happen, but Tarantino, in his inimitable fashion as filmdom’s resident juvenile delinquent, is going to toy with your expectations, all the while commenting mercilessly, if somehow also affectionately, on the utter superficiality of men playing cowboy in the backyard.

As always, Tarantino’s cinematography and overall framing is perfection, the movie a loving homage to buddy comedies of the late 60s and 70s, yet with a very dark undercurrent. No detail is left unturned, and it is the kind of movie which film geeks could watch forty times and still miss layers of winking commentary buried in a radio ad or billboard or prop in the background. This may be the director’s most carefully curated film ever. I particularly took note of how the soundtrack is peppered with popular ditties of the era but covered by out-of-fashion pop performers trying to stay relevant in a hippie dippy age (e.g. Robert Goulet doing his best Richard Harris on “MacArthur Park”).

Even in casting, Tarantino is commenting on the ephemeral nature of the entertainment enterprise (beautiful Brad Pitt as reasonably attractive Leonardo DiCaprio‘s stunt double?!) as well as the ever elusive desire by performers to leave a legacy.  Andie MacDowell’s daughter Margaret Qualley plays a free-spirited ragdoll of a Manson family member. Bruce Dern, a counterculture figure in and of himself, pops up in a pivotal scene as the notorious Spahn Movie Ranch’s decrepit owner, unknowingly housing an army of leering Manson acolytes whose sole desire is to take down the very establishment once central to the ranch’s Western film output. Al Pacino, another actor associated with the dramatic transformation in cinema in the 1970s, plays a maneuvering and cynical agent who lays bare the ugly truths of commerce driving the money-mad, fame-seeking inhumanity in Hollywood. Everyone is pretty damn terrific, and whether they are in on the joke or not is uncertain.

As self-serious as my analysis appears to be, the movie is a hell of a lot of fun. It is meandering, episodic, sometimes maddening to follow, Tarantino continuing to tell stories as a nesting series of parentheticals. It is both nostalgic and critical, transporting you to another era, well aware of the insidious influence that that time continues to have on us all. Tarantino’s Hollywood is populated with lost souls – TV actors on the decline, movie stars on the ascent, and serial killers on the prowl – for whom celebrity-seeking and name-making is job one, regardless what that task does to themselves, their souls, or anyone surrounding them.

I can’t reveal a thing about the ending, without spoiling a twist that is both telegraphed and unexpected. Let me say that the fairy tale allusion in the title as well as its direct reference to Sergio Leone’s blood-soaked epic Once Upon a Time in America are intentional. The film offers us a happy ending of sorts, while graphically depicting the reality of the cartoon violence Rick Dalton and his contemporaries once promulgated via black-and-white television sets. This film is both Tarantino‘s least violent film and his most. The film’s ambling pace lulls the audience into complacency, so the carnage when it comes – fast, furious, and brutal – is that much more disarming.

Once Upon a Time in Hollywood is at once a love letter to another time and a cautionary tale, with a chillingly implied postscript that history does indeed repeat itself. And that all of us are too vain to ever really do anything to stop it. 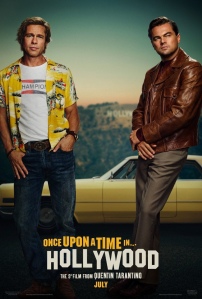 Everybody knows the damn truth
Our nation lied, we lost respect
When we wake up, what can we do?
Get the kids ready, take them to school
Everybody knows they don’t have a chance
To get a decent job, to have a normal life
When they talk reforms, it makes me laugh
They pretend to help, it makes me laugh
I think I understand why people get a gun
I think I understand why we all give up
Every day they have a kind of victory
Blood of innocence, spread everywhere
They say that we need love
But we need more than this – “God Control” (Madonna)