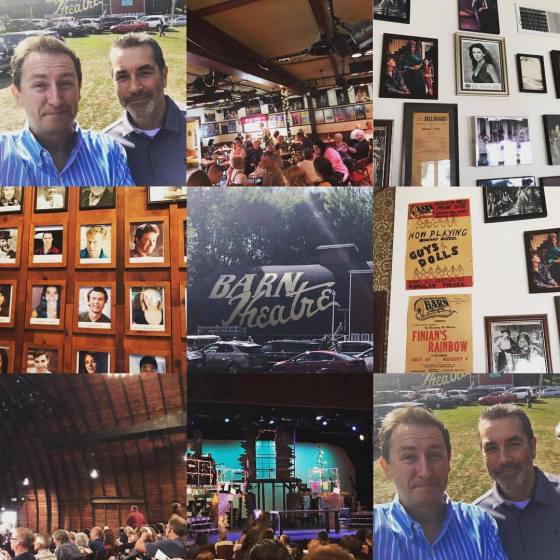 When Rent hit the musical theatre scene, it created a seismic shift, a middle finger to convention, not far afield from what Nirvana did to rock music a few years earlier with Nevermind or what Alan Moore’s Watchmen did to comics even a few years before that. We didn’t really know the term “market disruption” back then, but these Gen X cultural touchstones were exactly that, staking a claim and a voice for those at the margins and, in the process, achieving immense (and ironic) commercial success and transforming their respective industries. We often forget there are more people on the margins (people with wallets) than in the comfortable middle.

(Remember the “popular kids” who bullied you in school? There were fewer of them than the rest of us and nobody actually liked them. Sooooo, how were they deemed “popular”? Who gave them their power? All of us idjits on “the margins,” that’s who.)

I saw a touring production of Rent nearly 20 years ago at the Fisher Theatre in Detroit. I admit nosebleed seats as well as overamplifaction of the band and underarticulation of the cast led me to having zero idea of what was going on and longing for a nice Rodgers and Hammerstein show. Another decade later, we took in Chris Columbus’ film version, which retained much of the original Broadway cast. John loved it; I was a bit more on the fence, feeling the Home Alone/Mrs. Doubtfire/Harry Potter drector’s candy-coated, populist sensibility probably wasn’t the best choice for Alphabet City drug addicts, AIDS sufferers, drag queens, and starving artists. And, to be honest, faced with the prospect of seeing the show again, I wondered if it had suffered the same time warp that befell a musical like Hair.

During the Wilde Awards last week, I befriended Jamey Grisham, who has been a featured performer, choreographer, and director for The Barn Theatre School in Augusta, Michigan, for the past decade. The Barn had a great night at the ceremony, between an exceptional performance by Jamey and racking up a number of awards. Most notably, however, I was struck by their humility and their sense of community, something you don’t always see in the hyper-competitive world of professional and regional theatre. (Let’s just say I’ve never been sprung on insecure prima donnas.)

Jamey was wrapping up The Barn’s 2017 summer repertory season, playing Angel in, yup, Rent and invited us to see their closing show. So glad we made the drive! 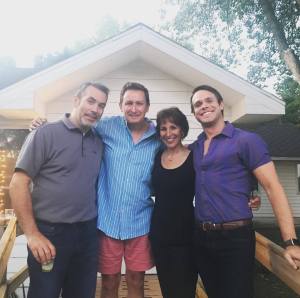 John and me with Penelope Ragotzy and Jamey Grisham

As an aside, The Barn Theatre was founded in 1946 and serves as a fertile training ground for the theatrical talent of today and tomorrow. Notable alumni – who served as apprentices or appeared onstage or both – include Lauren Graham, Tom Wopat, Jennifer Garner, Eric Petersen, Marin Mazzie, Stephen Lynch, Kirker Butler, Paul Loesel, Kim Zimmer, Becky Ann Baker, Eric Cornell, and, yup, Jonathan Larson (the creator of Rent who died a tragic and untimely death from aortic dissection the night before the show opened).

Jamey, perhaps channeling a bit of his community-building character, along with cast-mate and fellow Wilde Award winner Penelope Ragotzy (who also oversees publicity and marketing – they wear MANY hats there) did everything they could to make us feel welcome.

Unfortunately, their production of Rent has wrapped and is now in the record books, so this review will serve more as a reflection on the piece itself, on its relevance, and on the unique and magical nature of The Barn Theatre itself. Given the ongoing cultural and socioeconomic fragmentation of modern-day America, Rent is perhaps more essential than ever (the narrative’s over-reliance on land lines and answering machines notwithstanding).

Loosely based on La Boheme, Rent details a Christmas-Eve-day-in-the-life (first act) followed by a year-in-the-life (second act) of a fractious group of New York anti-Friends: gypsies, tramps, and thieves who can barely afford a cup of coffee, let alone hang out all day in a coffee shop, and whose “fabulous” loft living comes with no heat, no electricity, and the constant threat of eviction. Larson drew iconic characters (the filmmaker, the musician, the junkie, the drag queen, the performance artist, the lawyer, the teacher, the sell-out) and gifted them with even more iconic songs, an unyielding series of barbaric yawps from a youthquake disaffected by the 1% ruling the world. Larson was ahead of his time, foretelling a generation for whom gender and sexuality are fluid (albeit silly) constructs, who care deeply for their environment and whose diet and fashion are dictated by kindness and compassion and locality, and whose self-absorbed/self-aggrandizing selflessness drives all grown-ups in their presence to apoplexy. Sound familiar? All of it?

The Barn’s production, populated as it is with Millennials channeling the Gen X oldies, got that irony fully. From the flawless jungle gym of a set by Samantha Snow to the pitch perfect Archie-meets-Salvation Army pop of Michael Wilson Morgan’s costumes, the able cast was aided and abetted by a technical team – and by Brendan Ragotzy’s sure-handed direction – that embraced the early 90s conventions fully yet wasn’t afraid to wink at the more twee “lost generation” quirks. (The Barn space itself, if you’ve never been, is like seeing a musical in the inverted hull of an old ship, warm and cozy, a little eerie, kind of claustrophobic, and very dramatic.)

Grisham (and, no, it’s not just because he invited us!) was a standout as the shamanistic Angel, the tinsel-strewn lightning rod whose second act sacrifice teaches this band of misfits what love really means. Grisham (doing double duty as the show’s choreographer as well) commanded attention with every entrance and imbued Angel with a lovely “mama bear” authoritarianism that was a welcome new addition to the piece.

Also providing remarkable turns were Courtney Bruce as heart-of-gold-in-pleather Joanne and  Byron Glenn Willis as heart-on-his-sleeve-Jiminy-Cricket Tom Collins. Both mined the conflicted layers inherent in each role, pushing past the one-note takes (pushy lawyer, saintly teacher) that can derail lesser portrayals of each character. Notably, Bruce’s “We’re Okay” and Willis’ reprise of “I’ll Cover You” were character-driven showstoppers that exemplified how each actor grounded their performances in the urgent realities of untenable situations. (I would be remiss if I didn’t note that Willis and the aforementioned Grisham made a divinely poignant stage pairing, both vocally and in their scenework.)

Maureen (originated by Idina Menzel) can be a confounding character, the pampered performance artist who wreaks emotional havoc on anyone foolish enough to give her their heart. In Samantha Rickard’s hands, Maureen was no-less confounding, but also sympathetic and relatable … and a comic firecracker to boot. “Over the Moon,” Maureen’s absurd paean to absurd social justice warriors, was a triumphant hoot, augmented as it was by director Brendan Ragotzy’s genius decision to add a chorus of dancing cows. And, yes, Rickard and Bruce knocked sassy, swaggering musical standoff “Take Me Or Leave Me” out. of. the. park.

Courtney Bruce with me and John

Overall, the ensemble work was top-notch, a blend of seasoned Equity vets and acting apprentices. The central roles of  Mark and Roger are often a challenge to differentiate, given how broadly drawn all of the surrounding characters are, and Nick Barakos and Alex Crossland (respectively) held their own, with Barakos especially offering some nice solo moments and solid interactions with Angel and Tom as the show progressed. These performers obviously will continue to grow, and it’s a remarkable environment where students can take top-billing and learn onstage from seasoned pros.

Following each Barn performance, audience members are encouraged to retire to the “Rehearsal Shed” where the apprentices present a cabaret show (“The Bar Show”) – and serve you drinks and desserts (imagine your grandparents’ “rumpus room” if it had been taken over by cast members from the documentary Camp). Given that we were there for the final performance of the season, emotions ran high – and many a heart-string was plucked – as these kids poured out their souls (and the spirits) one final time. It was truly a gift to be in the room. 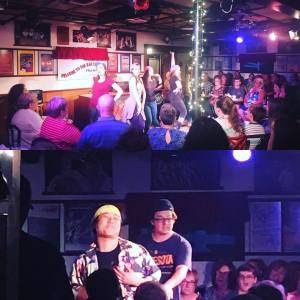