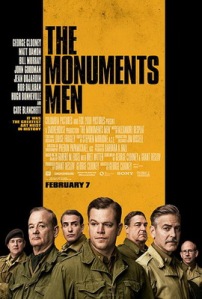 I am the sort of person that, if I see a forlorn Lego mini-figure abandoned in a snowy mud puddle as I’m leaving the movie theatre, will “rescue” it, put it in my pocket, wash it off when I get home, and set it on a shelf in our over-crowded basement alongside sundry other “misfit toys.”

So, George Clooney’s latest directorial effort The Monuments Men, in which a ragtag team of sentimentally minded art lovers bands together to snatch classic sculptures, paintings, and other works from the fiendish grip of the Nazis in World War II, spoke to this “leave no stuff behind” part of my soul. (I likely need an intervention.)

A less rambunctious hybrid of Raiders of the Lost Art, Inglourious Basterds, National Treasure, and Clooney’s own Ocean’s 11 trilogy, The Monuments Men is b-movie silliness disguised as a “based on true events” prestige picture. And there’s nothing wrong with that.

The plot, which is a bit wispy, concerns Clooney’s character convening a number of his aging buddies (museum curators, architects, and scholars who include Bill Murray, Bob Balaban, Matt Damon, Hugh Bonneville, Jean Dujardin, and John Goodman) for one last great adventure, taking on Nazi forces in the latter days of the war and returning lost works to their original owners (both private collectors and museums).

Y’see, the film posits that Hitler, a failed painter turned insane dictator, is hoarding as much of Europe’s great art as he can get his grubby mitts on, aiming to populate a proposed “Fuhrer Museum” with his haul. I don’t know how accurate that is – it very well may be – but it conveniently offers the film its “stop Darth Vader’s Death Star at all costs” whiz bang roller coaster motivation.

The film does stop periodically in its “gang of great joes making the world safe for democracy/creativity” whimsy to ground us in the stark realities of the era (albeit rather superficially). A few characters do not emerge unscathed; we see varied references to the darkest atrocities of the Nazi regime; and Clooney, at the film’s conclusion, has a marvelous speech delivered to a captured SS officer sharply illustrating both the broad scope and ugly futility of Hitler’s hate-filled tyranny.

Largely, however, the film is a frolic and a throwback to a simpler cinematic era. In fact, some of the movie’s most salient observations emerge from comic throwaway lines. At one point, when “The Monuments Men” (they actually were called that) unearth a ton of gold bricks (the entire Nazi treasury) alongside some stolen art, the joint chiefs swoop in and take credit for the find. Goodman intones, “The U.S. Army might not care about art, but they sure as sh*t care about gold.” The more things change, the more they stay the same.

I have to say that I adore latter-day Bill Murray (I wasn’t as much a fan of his younger days, post-Saturday Night Live.) He has transitioned from shaggy, petulant misanthrope to a warm, world-weary presence. Maybe I am just as exhausted by this planet now as he has always been, but I find his gentle emotional dyspepsia completely identifiable. He even accomplished the impossible for me and made his film sidekick Bob Balaban tolerable … and even kinda cute.

Cate Blanchett, so good in the recent Blue Jasmine, has another great, if more understated turn here, as a frustrated art curator who may or may not be a Nazi sympathizer. She has to pull off a tricky part that is one part 40s spitfire moll, one part “Marian the Librarian,” and two parts tortured aesthete. She does a fine job, quietly grating and heartbreaking at the same time.

Continuing my track record of crying at the darndest movies, I found myself weepy (and snotty) a couple of times. (I won’t tell you where, though one may involve Jean Dujardin and a horse and one may include Clooney’s aforementioned speech.) Yup, add The Monuments Men alongside Star Trek Into Darkness, Captain Phillips, and even The Lego Movie as films that made me (and likely no other humans on the planet) cry.

11 thoughts on ““The U.S. Army might not care about art, but they sure as sh*t care about gold!” The Monuments Men”