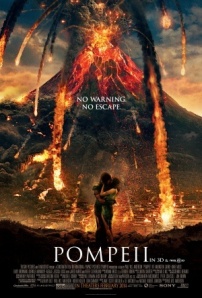 Today is Oscar Sunday, when Hollywood self-congratulates to the point of apoplexy, celebrating the best and brightest (or most cannily marketed) that the film industry has to offer.

So how do I honor this momentous day? I go to see hack auteur Paul W.S. Anderson’s “historical” epic Pompeii.

So this track record certainly qualifies him to direct a film depicting one of the most compelling and haunting natural disasters to befall mankind. Right.

The script is basically a sugary smoothie of no nutritional value, blending the corny bad boy/good girl/class warfare-doomed romance of Titanic, the episodic “do we really care if these people get crushed by flaming objects?” disaster of The Towering Inferno, and a smattering of the weirdly homoerotic oeuvre of Anderson’s fellow b-movie ham-hander Zack Snyder (see: 300 …. or the Abercrombie and Fitch catalogue).

As for the obvious Titanic swipe (another movie I can’t stand, I might add) Anderson even has lead Emily Browning intoning “I’ll never let you go!” at the film’s abrupt conclusion. In a sign of some cinematic advancement, though, she doesn’t then instantaneously contradict herself by dropping her beau Kit Harington (Game of Thrones) into the briny depths – as Kate Winslet did to a blue-lipped, bug-eyed Leonardo DiCaprio.

You’d be better off watching a History Channel documentary on the volcano that ate a Roman seaside village than this over-baked tripe. And so would the rest of the cast. Why is brilliant Jared Harris continuing his downward slide appearing in crud like this? He and Carrie-Anne Moss soldier through their stilted, portentous dialogue about investing in Pompeii’s new vomitoria or some such nonsense. I think he’s the mayor of Pompeii? I have no idea.

Then Kiefer Sutherland shows up seeming very … Kiefer Sutherland … as ominous Roman Senator (by way of Malibu) who wants to steal Harris’ daughter away. ‘Cause of course when a volcano (which I will admit is truly impressive, by the way) starts blowing chunks all over town, what would you do? I’d stop for a little palace intrigue, myself. Who cares if the grocery store just got flash-fried! Let’s twirl our proverbial mustache and destroy a family for kicks!

(And didn’t Mount Vesuvius erupt like instantly so that people were trapped in time baking bread and stuff? That’s what I remember from grade school, though that could be totally wrong. That would have made for a much shorter movie, and we could have avoided the laughable moments of crockery shaking and dust falling from ceilings as people furrowed their brows confused about the imminent mountain-go-boom headed their way.)

I was entertained, but I half expected Fred Astaire, Tony Curtis, Ricardo Montalban, Shelley Winters, and Jean Simmons to show up wearing togas and hanging out with bell boys or maybe breaking into a musical number. That would have helped immeasurably.

14 thoughts on ““No warning. No escape.” No kidding. Pompeii”