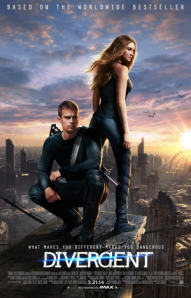 Anyone who has followed this blog for a while knows that I am not exactly a fan of young adult fiction or the various movies it has spawned over the past 10 years. Twilight makes me snoozy; The Hunger Games leaves me peckish (and cranky), and gooey dreck like The Mortal Instruments just gives me a sugar headache.

Imagine my surprise, then, at how much I enjoyed Divergent. I’ve been dragging my heels to see it, waiting until the last possible moment, as it has been in theaters over a month. In fact, my showing tonight only had one person in it: me.

It is yet another dystopian fantasy in which society has (more or less) survived some unidentified cataclysm. A new order has been put in place to keep all of us well-behaved, monochromatic, and … a little dull. In Divergent‘s case, humanity has been organized into factions according to some key defining personality trait; for example the Dauntless are courageous or the Abnegation are selfless or the Erudite are, well, really smart.

Akin to Harry Potter’s famous sorting hat, teens in this society are forced to choose which faction will serve as their tribe/home for the rest of their days. Said coming-of-age ceremony seems to involve hallucinogenic drugs, plasma screen televisions, and some very unfortunate outfits that appear to have been designed by Eileen Fisher on a very bad day.

Shailene Woodley, portrays “Beatrice,” the heroine of our tale. She is a member of Abnegation, the selfless folks, and her parents are played by Ashley Judd and Tony Goldwyn (who are always so good at being stately and worried). Beatrice’s father serves some role in local government, though I wasn’t ever entirely clear what. All I could figure is that society is now led by a rather boring yet politely dysfunctional city council from hell.

Unsurprisingly, the parents in Divergent-world are hopeful that their children end up staying in the faction of their birth, but that is not always the case. Hence, the title “divergent” pertains to young people who defy tidy categorization. This diversity of thought and attitude seems to be the bane of existence for Kate Winslet’s “Jeanine” who heads up the power-hungry Erudite clan – as indicated by her smart Hillary Clinton haircut and Donna Karan-esque navy blue suits.

The bulk of the film is spent setting up the rules of this future society and, when Woodley is in fact revealed to be “divergent,” tracking how she will survive a society that doesn’t much want her in it. She is mentored by the hunkily haunted “Four,” portrayed by newcomer Theo James, channeling an Anthony Perkins-ish, glowering charm.

I found the proceedings much smarter than what is typically on display in these kinds of films. I suppose the casting of Winslet is a sign that director Neil Burger (The Illusionist, Limitless) had something greater in mind for this one. It reminded me at times of Ray Bradbury’s Fahrenheit 451 and Kurt Vonnegut’s Harrison Bergeron, both of which depict near-future societies whose well-meaning, peace-keeping totalitarianism results in widespread mediocrity and a crushing fear of the unique. Orwell’s allegorical legacy continues … praise be!

At one point, Winslet’s character ominously declares, “The future is for those who know where they belong.” Perhaps its just my paranoid middle age speaking but our society today seems to fear the unknown more than ever. The cinematic parable of Divergent (and its two planned sequels) strikes me as so powerful at this precarious cultural crossroads where we find ourselves. So, for once in my movie-going life, I’m actually looking forward to the second installment in one of these teen oriented sci-fi fantasias. Heaven help me.