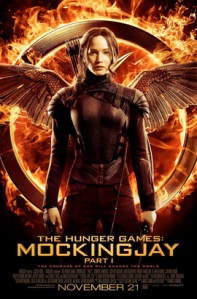 I will admit that Suzanne Collins’ The Hunger Games trilogy is just not exactly my cup of tea. My first exposure was the initial episode in the cinematic franchise, starring Jennifer Lawrence. My biggest issue, ultimately, may have been with the marketing, which likely didn’t do the movie (or its source material) any favors.

Y’see, I grew up in a small town, the daily paper of which now peppers its pages every fall with one image after another of young bow-hunting girls and their “prizes” – bloody deer carcasses. Lots of them. One sad image after another of a toothy kid, grinning madly, not as if they’d just won a science fair or a spelling bee, but because they killed some defenseless creature. And that bugs me. Are these kids the target audience for these movies? Or are people who find this kind of “sportsman”-proselytizing offensive the audience? I don’t know.

The reason I share this bit of soap-boxing is because the original film seemed oddly positioned at some strange Venn Diagram nexus where Harry Potter-philes and Twi-hards meet neurotic survivalists and Cabela’s frequent flyer-card holders. I wasn’t exactly sure the core demographic, and perhaps Hollywood was trying a bit too hard to appeal to all comers. I heard a lot of rhetoric that somehow Katniss Everdeen, “the girl on fire,” with her furrowed brow and propensity for zapping squirrels and people with her trusty bow and arrow was a great antidote to the Disney princess affliction that was miring our nation’s young women in a malaise of pink chiffon. Maybe. But are those the only two choices? Archery and violence or toddlers and tiaras? Sigh.

Well, I guess I played my hand a bit early on this one, eh?

Said marketing/positioning celebrated the games aspect of the narrative, while missing entirely the inherent social satire. Granted, the marketers likely chose the more sale-able commodity, but, for someone persnickety like yours truly, this approach has made it that much harder for me to warm up to this particular franchise. (Divergent is more my speed.)

Blessedly, The Hunger Games film series has evolved and moved past the gimmicky hook of watching teenagers slaughter each other before national audiences in an oppressed dystopian near-future. (Gee, why is it that I don’t get that these flicks are good wholesome family fun?!) This brings us to the third installment in the franchise (after The Hunger Games and Catching Fire), the awkwardly titled The Hunger Games: Mockingjay – Part 1.

Those of you ready to jump down my blogging throat in dismissal of my critique of the series’ omnipresent marketing framework? How’s about you read that title again: The Hunger Games: Mockingjay – Part 1. And convince me that the third book in this literary trilogy was not unnecessarily hacked into two parts to fill Lionsgate’s coffers with extra coin. Just sayin’. (No, I’m not the first to point this out, but it seems a fair critique on all fronts.)

This latest film continues the revolution that Katniss began fomenting in Panem (the future stand-in for an America run into the ground, no doubt by a lethal combo of Democrats and Republicans). Mockingjay spends the bulk of its running time underground, quite literally, as Katniss and her pals find themselves sequestered away in the mysterious District 13, a militarized sector that all had thought long-destroyed.

District 13 is the home of the Rebel Alliance (oops, wrong franchise) … the rebellion led by President Coin (Julianne Moore, a subtle-yet-steely breath of fresh gravitas) with the assistance of games-maker Plutarch (Philip Seymour Hoffman, sadly a bore in one of his final roles), weapon-smith Beetee (always sparkling Jeffrey Wright), and fashionista-cum-PR-wonk Effie Trinket (Elizabeth Banks, a standout as she curdles Effie’s cartoonish buffoonery into sharp social commentary). The saving grace of these films has always been in the casting (Woody Harrelson and Lenny Kravitz have both done some of their best work in the series), and this entry is no exception.

Unfortunately, Jennifer Lawrence and her bag of actorly tricks are starting to show some wear and tear with Mockingjay. The film is two hours of treading water before the big blowout with movie number four, and Lawrence suffers for it. (As do sidekicks Liam Hemsworth as Gale and Josh Hutcherson as Peeta.) Lawrence, saddled with what appears to be an Elvira wig from a bad Halloween costume, glares and pouts, glowers and mopes, without a heckuva lot to do. There’s a lot of talking and talking and talking about various political machinations, most of which bored me silly, and, by the time, Lawrence loses her sh*t in the third act because Peeta is in some grave peril (yet again), I found myself giggling and not one whit concerned for any of these thinly drawn characters.

Here is the interesting concept that Mockingjay (Part 1!) presents, however: wars are won and lost not by bravery or valor or even violence, but by public relations. The sly-est and most engaging moments in the film are when the forces of good and bad start to blur in their relentless uses of videographic propaganda (kinda like our fall election). The first two films laid this groundwork with jack-o-lantern-headed reality TV pundit Caesar Flickerman (a truly unhinged Stanley Tucci) and his broadcast of the super-violent Hunger Games as both public diversion and punitive restraint (boob tube as carrot and stick). This latest entry shows how that machine is employed in times of great social unrest, echoing eerily some of the latest trials and tribulations affecting race relations in present-day America.

For a series so superficially savvy about the strategic implications of marketing and PR on societal oppression, you’d think The Hunger Games’ real-world advertising campaigns wouldn’t seem so tone-deaf. At one point, Effie hisses with glee at Katniss, “You are going to be the best-dressed rebel in HISTORY!” Banks as Effie clearly gets the irony of that line and zings it to the rafters. But, then, I remembered seeing a Katniss Barbie doll (dressed in the same chic skin-tight jump suit) at Wal-Mart earlier this Black Friday “sell, sell, sell!” week, and I realized how hollow that irony actually was. Talk about winning the battle and losing the war…