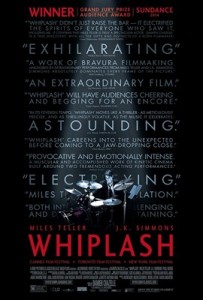 Boy, when the Oscars get it wrong, they get it spectacularly wrong. I’ve already referenced what I see as a colossal eff-up in the way they recognized (barely) the socially incisive/incendiary Selma and Foxcatcher, but, now that I’ve finally seen Whiplash and based on what we all think we know about the impending awards, the fact that this f*cking (sorry.) fantastic movie hasn’t been nominated for more and that it likely will be eclipsed for the big prize by Birdman or Boyhood (not to mention missing out on the word-of-mouth box office bonanza lifting American Sniper and The Imitation Game) is, well, a crock.

(I think I have been so impacted by this incredibly immersive flick that I’m channeling J.K. Simmons’ foul-mouthed, corrosively-brilliant jazz music instructor Terence Fletcher. Simmons will no doubt be the lone Oscar-winner from Whiplash, and his acknowledgment will be richly deserved.)

Based on the real-life experiences of writer/director Damien Chazelle, who performed in the Princeton High School studio band, Whiplash tells a small tale in epic brushstrokes, a two-man character drama with the pacing and tension of a slasher film. Simmons’ bullying Fletcher is an instructor at the fictitious Shaffer Conservatory, and Andrew Neiman, as underplayed extraordinarily by the Oscar-robbed Miles Teller, is a first-year student who aspires to be Buddy Rich and has the social graces of Genghis Khan. These two musically gifted misanthropes are a match made in hell, and the fireworks that erupt as Fletcher uses every abusive trick in the book to inspire “greatness” from his protege are horrifying, visceral, thrilling, and, in Fletcher’s defense, effective.

Teller’s Neiman is a super-talented, uber-driven simp who treats his doting father (Paul Reiser, a loving portrait of justifiable parental anxiety) with courteous disdain and his momentary girlfriend (Glee’s Melissa Benoist showing refreshing depth in a cameo role) as a roadblock to his wunderkind aspirations. The film and Teller make no attempt to victimize Neiman – he is not very likable but he is completely relatable. We all have had a moment (or two) where the desire for fame or success or advancement lead us down a soulless, soul-sucking path into the arms of a sure-minded, deal-making devil.

Fifty-plus years ago, Whiplash would have been a spectacular episode of Playhouse 90 with Lee J. Cobb as the teacher and Martin Sheen as the student. Chazelle’s confident direction has that classic series in its DNA, and Whiplash has all the sweaty, anxious discomfort of the best allegories. Unlike Birdman, which (albeit deftly) eviscerates performers’ egomania and obsession with “craft” in a rather smug and self-satisfied insular way, Whiplash reveals the raw, nasty, competitive ugliness underpinning too many arts cultures – the kind of crucible where a teacher/director plays emperor/tyrant/god in a tightly-fenced kingdom, achieving amazing results but at the cost of everyone’s humanity. The film’s denouement is a brilliant war of sidelong glances, sweat, blood, and musical cues all set to the hypnotically propulsive  jazz standby “Caravan.”

As I sit here watching the Grammy Awards (at this moment, the ever delightful Tom Jones in a duet with fabulous Lady-Tom-Jones-in-training Jessie J), I can’t help but reflect on what the various nominees and winners have endured and inflicted in their various meteoric ascents, descents, and comebacks. That’s the power of a film like Whiplash. While the film narrows its gaze on the misanthropy inherent in the jazz world, the cat-and-mouse inter-generational combat of instructor and student apples to any art form, industry, or workplace. Don’t miss this tightly coiled, perfect little/big film.