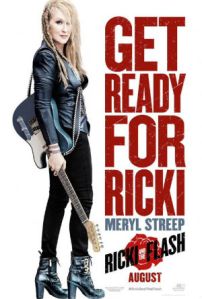 What are the odds that two movies in a row, which we’ve viewed over Labor Day weekend, are about failed and/or struggling musicians trapped in a pop-rock Ragnarok in the San Ferndando Valley?!?! Is the dusty, dingy Valley the new cinematic shorthand for a career in retrograde?

Last night, we suffered through Zac Efron suffering as pretty boy DJ with no club to call home in We Are Your Friends. And tonight in Ricki and the Flash, Meryl Streep (!) channels her inner Joan Jett as a rocker who flees her Hoosier home in pursuit of guitar god glory in the City of Angels, achieving neither top 40 success nor familial respect in the tortuous/torturous process.

Directed by Jonathan Demme (Silence of the Lambs, Philadelphia), Streep’s is the better film, though by a narrow margin (believe it or not – both flicks are worthwhile and an interesting double feature).

As a rock star, Streep with her bizarre hair braids and unconvincing tattoos is about as believable as I would be playing, say, Axl Rose.

As a failed rock star, whose abject heartbreak and hand-to-mouth hardscrabble anxiety are telegraphed in every blink of her limpid eyes and whose well-heeled Indianapolis-based family has given her the “Hoosier Hospitality” cold shoulder for their perceived abandonment by her decades earlier, she is pure movie gold.

In another era, the sudsy plot – with a side of Freudian mama bashing – would have been a B-movie tear-jerking barn-stormer for a Susan Hayward or a Bette Davis. A mother flies the coop on her three beatific babies and their hunky nebulously-though-fruitfully employed businessman papa (as played by Kevin Kline … who seems trapped in celluloid Indiana … wasn’t In & Out set in Greencastle of all places?). She lives in bohemian filth, playing nightly gigs at a sad-sack bar for the same half-dozen patrons, including a moony-eyed barkeep with a heart of gold. She loves/hates/loves the bassist in her band (a surprisingly charming and heartfelt Rick Springfield), and, one day, when her daughter’s husband walks out on her the way the mama had walked out on the family years prior, our heroine heads back to Indiana to set things right with her broken brood.

However, Demme and Streep both acknowledge they aren’t working with the deepest narrative here, and they bring their A-game, supported by an exceptional ensemble, that also includes a luminous Audra McDonald as Kline’s second wife, a clear-eyed feminist in Yuppie dragon lady clothing. Her limited scenes with Streep crackle with the energy of two women (in life and onscreen) who have fought and lost and won an endless series of skirmishes in ‘Murica’s ongoing gender wars. I would like an entire movie of the two of them just talking … or reading the phone book … or smacking stupid dudes upside their stupid heads.

Streep’s real-life daughter Mamie Gummer acquits herself reasonably well alongside her mom. She doesn’t have Streep’s impish energy or insidious inner-life. Gummer is saddled with a lot of bed-headed moping in the movie, but her chiefest strength is in the quiet observation she brings to each scene. She has her mother’s presence but it is calibrated to silence as opposed to activity. Interesting to watch.

The film resolves its central conflicts as you might expect – a little contrived and a lot predictable. Regardless, with Streep’s deft character work and that of her cast-mates, you are so invested in these mixed-up souls onscreen that, while you know exactly what’s coming, you can’t take your eyes away from the journey.

The purest moment of unadulterated authenticity occurs early in the film’s final act when Streep stops her band in the middle of their set and appeals to the female patrons of the bar as to how crappy it can be to be a woman and a mother in this society. She rails against a world where you “miss one kid’s concert, one play and you’re an awful mother for life. Men? You can get away with anything…but not us.” This moment, in conjunction with her recent spicy turn as the Witch in Into the Woods, represents Streep’s zone – declaring hard-earned truth with passion and fury as a woman, as a parent, as a person.

At the film’s conclusion (yes, set at a wedding – shocker), Streep serenades the crowd with a cover of Bruce Springsteen’s “My Love Will Not Let You Down.” She croons …

One thing you gotta know

In part, she is singing to those who’ve judged her rightly and wrongly – her children, her former husband, his new wife, the snooty wedding guests – but ultimately she is (and always should be) singing for one person: herself.

5 thoughts on ““My Love Will Not Let You Down.” Ricki and the Flash”