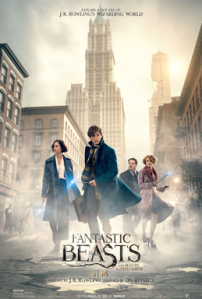 Fantastic Beasts and Where to Find Them is to the “Harry Potter” cinematic universe what Captain America: The First Avenger is to the “Marvel” one. Bear with me here. In the obvious, both films are set in a golden-hued America of yesteryear where art deco glitter and workaday charm belie a dark societal underbelly of xenophobic, segregated bullying. In a more esoteric way, both films are surprising throwbacks to a slower paced, quieter, more subdued (escapist fantasy and overindulgent special effects notwithstanding) kind of film-making, where whimsy and poignancy meet and where heartbroken underdogs have their day.

I like cinema like that – Frank Capra, The Wizard of Oz, Howard Hawks, Saturday matinee cliffhangers, and so on, and even latter day homages like The Rocketeer or Dick Tracy. Modern audiences aren’t always sprung on this kind of retro storytelling – though Fantastic Beasts‘ box office returns seem to buck that trend.

J.K. Rowling’s Harry Potter book series (and the movie adaptations) focused, in a Brit boarding school milieu, on young wizarding students overcoming adversity, championing inclusion, and saving the day. Goodbye, Mr. Chips meets The Once and Future King. A Separate Peace meets Bewitched. Directed by longtime series helmer David Yates, Fantastic Beasts and Where to Find Them – a Harry Potter prequel of sorts that explores the American side of this magical world, nearly a century earlier (1926 to be exact) – is a different animal altogether (pun intended).

Newt Scamander (portrayed by Oscar-winner Eddie Redmayne with the same shaggy-dog, twitchy, social misfit schtick he employed in The Theory of Everything) is a Hogwarts dropout who has dedicated himself to rescuing, rehabilitating, and protecting the mythical, magical animals of this world, woebegone creatures that neither muggle nor wizard seem to treat with honor or respect. He ventures across the pond for mysterious reasons, and some of his furry and feathered friends escape his watchful eye to frolic in a Jazz Age Manhattan. Spirited hijinks ensue, with surprisingly genuine peril and minimal lowest-common-denominator slapstick. In fact, Redmayne frets that these runaway critters are now “surrounded by the most vicious creatures on the planet: humans.” If Al Gore and PETA collaborated on a Harry Potter backstory, I suspect it wouldn’t be too different from the screenplay J.K. Rowling crafted here. Again: ok by me.

Redmayne is joined by a fabulous rogues’ gallery of character actors:

Unlike other entries in the Harry Potter canon, Fantastic Beasts unfolds less like a picaresque and more like a candy-colored potboiler. (Technicolor noir?) Why is Newt in America? What is the political endgame for the various players introduced? Why is there such loathing and fear for these beautiful, mischievous creatures Newt hides and hauls around in a battered brown suitcase, a valise that magically hides a portal to Rowling’s version of the world’s grooviest “no-kill” shelter? By the film’s predictably cacophonous denouement (my only criticism), many answers are provided, but enough dangling threads are left to tee up (no doubt) another (very profitable) series of films. I think I’ll be packing my suitcase to tag along.

3 thoughts on ““Surrounded by the most vicious creatures on the planet: humans.” Fantastic Beasts and Where to Find Them”