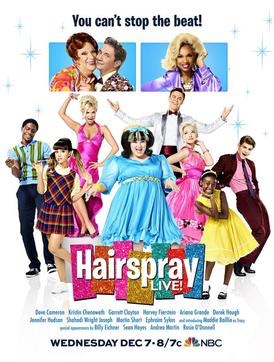 “They don’t put people like us on television – except to be laughed at.” – Edna Turnblad

This line from the musical Hairspray has always haunted me. I’m not a huge fan of the show, though I’ve always admired Harvey Fierstein and Marc Shaiman’s moxie turning John Waters’ bruise black 1988 satirical film about the horrors and sadness of socio economic marginalization, body shaming, and racial segregation into a bright, frothy Broadway musical. Damn if Shaiman’s tunes aren’t catchy!

But back to that line. Matriarch Edna – played on stage by Fierstein, and the original film by Divine and in the first musical film version by John Travolta – declares this brutal truth to her husband as their relentlessly optimistic daughter chooses to head forth and audition for an American Bandstand-style local teen dance show.

The timing of this particular NBC live holiday musical couldn’t be stranger or more appropriate. Fifteen years ago when the musical first hit with its early 1960s setting and focus on the ugly racist/sexist bile concealed under Dippity-do and crinolines, it seemed like a quaint reminder of another era, one which many of us knew we hadn’t actually escaped, but about which we blithely, mindlessly lived in denial anyway. Now that we are making America great again, which may be code for going back to this oppressive, regimented, candy colored era, Hairspray Live felt like a haunting, sickening, Orwellian cautionary tale.

Producers Craig Zadan and Neil Meron, working with Fox’s Grease Live director Kenny Leon, seem to have finally landed, more or less, on a successful formula for these social media teasing live events. Other than the unnecessary commercial breaks, with hyperventilating Darren Criss and an army of golf carts hustling panicked actors visibly from set to set, the show was pretty seamless. (Well, there was also the cluttered, confusing, and chaotic camera work… But you can’t have everything.)

Wisely, they stacked the deck with an army of pros in the adult roles, from Fierstein himself revisiting his Tony award-winning part in a winning mix of pea gravel, bombast, and the milk of human kindness to insanely annoying but sharply talented and utterly typecast Kristin Chenowith as race-baiting Cruella de Vil knock off Velma Von Tussle. SCTV vets Martin Short﻿ and Andrea Martin added some sweet-natured depth and color as Wilbur Turnblad and Mrs. Pingleton respectively but were often lost in the manic shuffle.

Jennifer Hudson has a miraculous voice – which is her chief super power – but I find her generally overrated as an actor. Regardless, her arrival as Motormouth Maybelle at the midpoint gave the production its finest musical moments and its most heart wrenching reminders of how far we have yet to go – quite literally, in fact, with the number “I Know Where I’ve Been.”

Dancing With The Stars’ Derek Hough was the night’s most pleasant surprise, seizing the national spotlight the show provided to plant his flag firmly in Mt. Musical Theatre. His unquestionable technique paired with his slightly skeezy “toot sweets” charm was perfect for the role of Corny Collins, and he made the most of every moment, including what was either a wildly inappropriate or brilliantly meta embedded commercial for Oreo cookies.

The “nicest kids in town” – including newcomer Maddie Baillio as Tracy, Ariana Grande as Penny, Dove Cameron as Amber, and Garrett Clayton as Link fared less successfully. It’s not that their performances were bad, but they were bland in the face of their scenery chewing elders. It felt like the cast could’ve used another week of rehearsals. However, that has been pretty much the case for every one of these live productions. So be it. Ephraim Sykes as Seaweed was the exception that proved the rule, however. He was a bolt of lightning across the screen, and I wished he’d had more to do.

In short, this particular musical always just seems to exist chiefly as a delivery mechanism for buoyant, electrifying, raucous “anthem for the oddballs” finale “You Can’t Stop the Beat,” and Hairspray Live stuck the landing. I question how “family friendly” a musical that opens with a flasher on the streets and includes double and triple entendres in every other line might be. I chuckled when Sean Hayes and Kristin Chenoweth implored us to “gather the family” in the show’s opening moments.

That said, the show’s message couldn’t be more timely or appropriate. For all American ﻿families. Great and small.

“You can’t stop today/As it comes speeding ’round the track/Yesterday is history/And it’s never comin’ back!”

10 thoughts on ““They don’t put people like us on television – except to be laughed at.” #HairsprayLive”