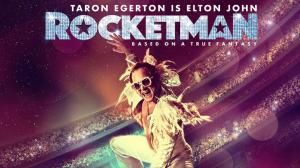 It’s like Elton John said to Bohemian Rhapsody, “Hey, hold my (now non-alcoholic) beer. Let me show you how a biopic of a 1970s/1980s, transcendent, groundbreaking, gay (but sorta conflicted and closeted-ish) rock god should be done.”

And if you love Elton John’s music but occasionally have found Elton John himself a smidge unpleasant (as I have), Taron Egerton’s bravura reinvention/translation of Elton John’s essence in the title role will give you reason to love the man again. It’s an Oscar-worthy performance that captures the sense memory of Elton at the peak of his powers while providing a very empathetic yet theatrical glimpse into the insecurity and heartbreak that fueled his greatest work. 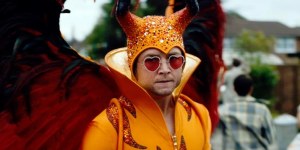 As directed by Dexter Fletcher (ironically, the helmer who came to the rescue of Bohemian Rhapsody when the embattled Bryan Singer walked off the set … too little, too late alas), Rocketman is simultaneously escapist and sobering, a beautifully constructed real-life fairy tale warning us of the false promise of celebrity excess and the corrosive power of self-denial. Oh, and it’s a full-blown g-damned musical with zero f*cks given – no apology, no shame – as a movie about Elton John’s life, depicted in broad operatic strokes, should be. 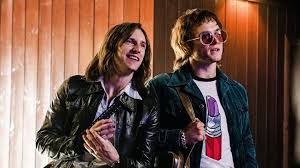 The best songs from the storied output of Elton John and lyricist Bernie Taupin (here delicately underplayed by a loving and sensitive Jamie Bell) basically form the blueprint for a Broadway musical anyway. Consequently, re-purposing ubiquitous story-songs like “Goodbye, Yellow Brick Road,” “Saturday Night’s Alright,” “Your Song,” or “Benny and the Jets” outside a concert context as integrated narrative commentary becomes a rather effortless exercise. That said, Lee Hall’s script is a thoughtful biographical kaleidoscope, loose on facts and timeline, but laser-focused on allegory and atmosphere, incorporating Elton John’s greatest hits as if they were always meant to populate and propel the arc of the singer-songwriter’s life. 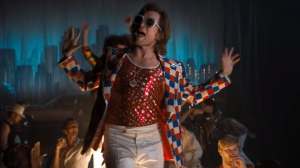 Of course, the costumes are divine and period-specific. I haven’t seen this many marabou feathers, platform heels, and sequins since the heyday of The Match Game. Yet, the film never devolves into camp. This isn’t a movie marginalizing nor ridiculing the extremes of Elton John’s life. This is a film expertly designed to handhold all of its viewers toward greater empathy.

When Elton fearfully confesses his sexual identity to his mother (Bryce Dallas Howard, perfectly fine, but apparently now typecast as cruel, self-absorbed hard-asses until the end of time), she responds, “I know. I’ve always known.” Yet, unlike films with lesser sensitivity toward this particular subject matter, the line is not delivered as a salve to Elton’s broken heart. Rather, it is the ultimate slight, as if she’s saying, “You’ve always been broken.” People may think they mean well with such a statement. Let me tell you, it’s not helpful.

Admittedly, the filmmakers lay on a bit thick how toxic Elton John’s parents might have been. In addition to Howard’s blowsy dragon matriarch, Elton has a frosty, jazz-loving father (Steven Mackintosh) who abandons the family after Elton discovers his mother canoodling with a neighbor man in a sedan parked street-side. Gemma Jones does balance things out a bit as Elton’s sympathetic grandmother, but, at times, the family dynamic in Rocketman seems like cutting room footage from the Harry Potter films of that dreadful, sweaty, sour tribe who foster young Mr. Potter.

Fortunately, Egerton (Kingsman, Sing) is a savvy enough actor to avoid portraying Elton as a shame-free martyr, embracing the character’s petulant, rage-filled, myopic dark side … and somehow emerging ever more likable in the process. Oh, and he does all of his own singing here, acquitting himself quite nicely with the challenging material

The film is framed by Elton John’s rehab stint in the late 80s/early 90s, and Egerton does a masterful job avoiding the maudlin pitfalls such a set-up could present. Early in the film, a Motown singer for whom Elton is playing keyboards cautions him, “You gotta kill the person you were born to be to become the person you want to be.” I suspect all of us struggle with this existential conundrum in the tricky tension between our personal and professional lives, but none so dramatically nor devastatingly as Elton John. Rocketman walks the tightrope beautifully between reality and parable, leveraging the pinball wizardry of Elton John’s life as a cautionary tale for us all.