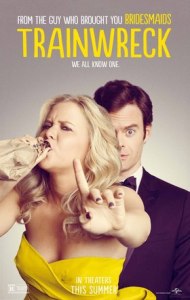 I finally saw Trainwreck. I’m probably the last person in America to see it. I’m so glad I did.

It’s not a perfect film. I think Amy Schumer, the film’s lead and screenwriter, is a brilliant sketch artist with a sharp POV that is so dead center and incisive that it seems skewed, if not downright avant garde, in a world strangled by artifice and hypocritical self-satisfaction.

As a satirist, Schumer typically works in bite-size toxic nuggets, and her first feature film script meanders (not that unusual for a Judd Apatow-directed flick – see 40-Year-Old Virgin or Knocked Up). Unsurprisingly, the strongest punches come from the frequent sidebars with broadly drawn characters like Amy’s addled viper of a boss (an unrecognizable and genius Tilda Swinton, zinging every big-haired, proud anti-feminist walking the planet).

Schumer is at her best in commentary mode, contrasting her wide-eyed cynicism with the empty-headed happiness of a society that blithely has no idea how sexist, racist, homophobic, ageist, and just plain dumb it can actually be.

So, the trick of planting her in the middle of a summer romantic comedy confection like this is keeping that tart, chewy Schumer nougat at the airy center. The film stumbles in its early scenes, working just a bit too hard at the Apatow-brand of gross-out-with-a-heart-of-gold shenanigans. We get it. Schumer is not Meg Ryan (thank heavens!) – she drinks, she screws, she takes drugs, she has a glorious jackass of a father (Colin Quinn, brilliantly channeling the dark side of every borough in Manhattan as a philandering papa whose MS derailed his high-life but not before he imploded his happy marriage/family). She works hard and she plays hard as a writer for the kind of men’s magazine that would make Hugh Hefner blanch.

In other words, she’s the character Will Ferrell used to play in these productions … or worse Seth Rogen did.

Yet, the canniness of the film is in how it questions that frat boy cliche, defying gender convention and blessedly, by the second and third acts, revealing the human underneath the costume – the whip-smart, emotionally-raw Amy who lives out loud in defiance of a culture that loves its cheerleaders.

Amy hates sports and cheerleaders and anything remotely associated with either, which prompts Swinton’s character to (of course) assign her a profile on an up-and-coming sports medicine/orthopedic surgeon Aaron Connors (played by a winning Bill Hader). At one point in the film, Schumer sneers at the group of gyrating Knick Girls in front of her, “You know, you are going to lose us the right to vote!”

As Amy and Aaron connect as people and as friends, they (no shock) fall in love, much to Amy’s consternation. The humanity of the film rests in Schumer/Hader’s dynamic. They are so believable, so gentle, so kind, and so spiky together, thereby grounding a film that otherwise would fall apart as a loose collection of (albeit very funny) character bits.

Hader’s character just happens to be besties with NBA star LeBron James who ends up being the stealth comic genius in the madcap proceedings. (Seriously, between James and WWE’s John Cena, playing Amy’s heartsick, kicked-to-the-curb boy-toy, who’d a thunk some of the funniest bits would be offered by two pro-athletes? Not this guy. Color me surprised.)

The film insinuates itself in a good way. The onscreen relationship between Schumer and Hader is so scruffily relatable (but still frothy fun) that it, well, sneaks up on you. The film (and Schumer) seem to be challenging you to care, and, by gum, you really do.

However, there are the typical final act complications that always seem to ensue in these kinds of films; though, in this case, they aren’t as ridiculous as Hollywood tends to dictate. And the final reunion of our intrepid couple, while quite adorkable, undermines a bit of Schumer’s central conceit that she is an everyperson who doesn’t need to bend to anyone’s constrained view of gender roles.  Sadly, the ending feels tacked on, like a focus group told the filmmakers, “We want to feel goooood! Can’t you just make us happy?!”

Well, I know what makes me happy and that’s seeing Schumer turn the stereotypical romantic comedy on its head and for about 75% of Trainwreck she does. I’ll take those odds.