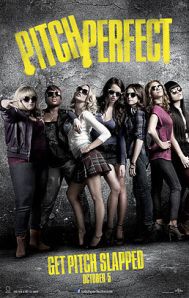 I have always found the self-serious harmonizing of college glee clubs mildly irritating and always amusing – I mean any genre that yields a group called “The Whiffenpoofs”…seriously? Come on!

So I was thrilled that new collegiate comedy/musical Pitch Perfect approaches its a cappella subject matter with a healthy dose of irreverence. (My favorite episodes of Glee use, as a skewed lens through which to view our zany/imbalanced/unhinged society, the inherent absurdity of a vocal group treating, say, Britney Spears as if she were Gilbert and Sullivan.)

Yes, the film has Glee‘s pop satiric edge in its DNA. It nicely marries that concept to a sort of junior, higher ed version of Bridesmaids, with a grounded, just left-of-center enough approach to its central female characters. To their credit, the filmmakers even include Kristin Wiig’s Bridesmaids‘ roommate Rebel Wilson in a very funny supporting role…and to their discredit, they have shamelessly stolen the conceit of once-fresh Bridesmaids‘ poster art (see above).

Carrying the film, beyond the fun and funny (though not groundbreaking) musical mash-ups, are leads Anna Kendrick and Skylar Astin. Like baby-faced versions of Tina Fey and a less obnoxious Dane Cook, Kendrick and Astin, who got their starts in Broadway musicals High Society and Spring Awakening respectively, are winning and believable as sweet, slightly dorky college kids who just really dig music. Kendrick, probably best known as George Clooney’s wide-eyed, wise-ass sidekick in Up in the Air, brings authentic wit and warmth to an at times riotously funny but also wildly uneven script. You can tell she is one of those luminous and generous actors whose mere presence has the gift of improving the ensemble around her.

NOTE: One of my personal faves, Elizabeth Banks serves double duty (off screen) as the film’s producer and (onscreen) as a sardonic fembot a cappella contest commentator who makes Entertainment Tonight‘s Mary Hart look like Mother Teresa. She is a delight!

The film does not ever stray from it hackneyed underdog structure (one of the characters even invokes Rocky at one point), but the sass and smarts of the leads and supporting players offer the enterprise a joyous uplift.