Girls Trip is so bawdy and raucous and, yes, delightful that it makes Bridesmaids look like Anne of Green Gables. Yet, there is something more significant than jaw-dropping raunch in the shared DNA of these two films. (And isn’t it troubling and a little sad that we are still comparing any ribald comedy featuring a group of female friends to one admittedly wonderful flick from six years ago? For every one Bridesmaids or Girls Trip, there are about 48 more gross-out comedies featuring men, and those don’t all get compared to The Hangover.)

No, what brings these two films together – Girls Trip and Bridesmaids – is heart and humanity but, most especially, the thrilling audacity to critique patriarchy and to celebrate female agency and intelligence through the cinematic hook of unrepentant madcap naughtiness.

Such a shame that there aren’t more movies like that. “It’s a hoot,” as one satirically out-of-touch business executive observes when Girls Trip‘s leads derail a televised cooking show midway through the film, but, dammit, if she isn’t right.

Portraying the “Flossy Posse,” a quartet of old college buddies whose wit is only superseded by their moxie is an A-team of crackerjack comic talent: Queen Latifah (Chicago, Bringing Down the House, Beauty Shop), Jada Pinkett Smith (Gotham, Set It Off), Regina Hall (Scary Movie), and deliciously scene-stealing Tiffany Haddish (Keanu).

As only movie “logic” can represent, the friends have pursued wildly divergent careers: celebrity gossip blogger, clinician, self-help guru, and businesswoman (respectively). The fact that this sitcom setup works as well as it does is a testament to this foursome’s talents as well as to Malcolm D. Lee’s smoothly effervescent direction and blackish‘s duo Kenya Barris’ and Tracy Oliver’s empathetic and intuitive script. The initial scenes depicting each of the four leads in their daily lives crackle with comic tension and a heightened but lovely reality. 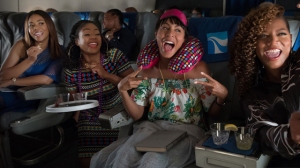 Hall’s character Ryan Pierce is on the fast-track to superstardom, aided and abetted by her hunky former pro-football player husband Stewart, as portrayed with just the right balance of glitz and menace by Mike Colter (The Good Wife, Luke Cage). She is invited to offer the keynote speech at the Essence Music Festival in New Orleans at the same time a large discount retailer is courting her and her husband to launch a lifestyle line of clothing and household goods. (Yes, I know this sounds ridiculous. It is. And the movie knows this too. Thank goodness.) Ryan decides to invite her buddies to join her for, you guessed it, a “girls trip” to counteract the fact that they’ve all grown apart over the past few years, and the foursome boards a plane and head to New Orleans. As Ryan tells the group, “This is the last day we will be this young.”

Pretty quickly, they all realize that the picture perfect lives they purport to lead are all kind of a mess, and, through the course of a their long weekend (and some truly audacious comic set pieces I can’t even begin to describe here), they reclaim the people they once were. If you aren’t choked up when Hall finally delivers that keynote and talks about the dreams and hopes she had as an individual back in college and how life and her rocky marriage have derailed her from being her most authentic self, well, you’ve got a heart of stone. Or you are under 40.

[ADDENDUM: Susanna Leonard noted on LinkedIn: “Bone picking: ‘Or you’re under 40’ – I promise you, women in their 30s can identify quite well with losing the dreams of their college-years. I finished college almost 15 years ago… I think I get it.” Right on, Susanna – I stand corrected. I was viewing strictly from the POV of a 40-something – the exact age of the film’s characters, in fact – and that was wrong. I appreciate that you took the time to read and to comment.]

On its surface, Girls Trip is just a sassy, raunchy summer night at the movies, and, on that level alone, it will be quite a crowd-pleaser. However, the depth of love and anger roiling underneath the surface of these women’s 25-year-long friendship has an authenticity and relatability seldom captured in this genre of film.

Haddish is the nuclear bomb in their midst. Forgive me yet another Bridesmaids comparison, but she is the Melissa McCarthy who swipes the picture away yet somehow remains a consummate ensemble player, elevating everyone to a higher level of performance. She is the quartet’s trickster and its broken/beating heart, who blithely ignores bad news and good advice and emerges victorious in any situation. She is a revelation.

But, then so is Smith – I’d forgotten what an actor she can be. Yes, she can play the anarchic spitfire in her sleep. (Her crime boss Fish Mooney was the only reason to watch Gotham – if there were an Emmy for “best use of lacquered fingernails,” she’d have ten.) And I tire of watching her and husband Will walk the red carpet as if they just descended from Mount Olympus. So, I had my doubts when I realized she was playing the requisite frumpy fuddy duddy in the group. She is a wonder in the part, rediscovering the impish joys of her youth, yet never devolving into self-indulgent clowning and always retaining the anxious, caring core of her character. When she proudly emerges with four bedazzled denim vests for her pals to wear on their trip and is told dismissively by the others that her sartorial efforts look like they belong to “the My Little Pony motorcycle club,” her hurt is as palpable as the line is glibly funny.

Queen Latifah is the only cast member who seems a bit lost amidst the shenanigans. Her character is faced with mounting debts and a failed career, and there is a melodramatic tension introduced at the midpoint between her character and Hall’s. It doesn’t completely work, but it certainly doesn’t hurt the picture either. Consequently, Latifah is forced to react knowingly to the broader bits Smith and Haddish get to explore and carry the maudlin moments when the quartet have their predictable (though really well played) final act meltdown. Latifah typically has such a presence, and, in Girls Trip, she ends up being a bit of a background player. In the inevitable sequel, maybe she’ll regain her edgy footing.

So grab thee a cosmo and a bag of popcorn and your best pals, and head over to the cinema posthaste for a weekend on the town with these screwball comediennes of the 21st century. They are a hoot.