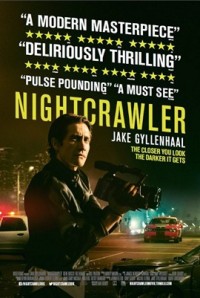 Don’t get me wrong, he’s always been pretty nutty, from Donnie Darko to last year’s Prisoners, but this fall’s Nightcrawler takes the cake. (The less said about Bubble Boy the better.) With his now emaciated frame and anime-esque bug-eyes, Gyllenhaal channels the feisty, manic desperation of someone who has bought too fully into Horatio Alger self-starting mythology.

As Louis Bloom, a wannabe cameraman selling to René Russo’s equally desperate television producer prurient footage he takes of mutilated bodies all over Los Angeles, Gyllenhaal not only pulls himself up by his bootstraps, he takes the boots off, throws them over his head, and sets them on fire.

At times, this darkly satirical tale reminded me of To Die For, Gus Van Sant’s 90s treatise on our preoccupation with fame and success at any price. However, Nightcrawler takes that film’s thesis and modernizes it to meet the relentless gluttony of our 24/7 news-cycles.

The film opens with Bloom stealing scraps of metal to resell, positioning him as a literal and figurative parasite on society. When Bloom comes across a grizzly traffic accident, he observes Bill Paxton, in fabulous character actor mode, filming said scene to resell to local media … another kind of societal parasite. And, as Bloom repeatedly notes throughout the flick, he’s a quick study.

Gyllenhaal’s google eyes light up as he ogles Paxton’s very expensive camera equipment and shiny news van, identifying a potential opportunity for himself. The movie tracks Bloom’s meteoric rise as he finds no end of salacious footage to capture, sometimes manipulating crime scenes to achieve the optimal money shot.

This is one of those movies, like There Will Be Blood or Dogville or Dancer in the Dark, that plumbs the depths of human misery so fully that I feel a little embarrassed to admit how much I love it. But, wow, I love this movie.

Russo, exuding world-weariness, is the perfect counterpoint to Gyllenhaal’s rampant ambition – she is a TV veteran who has seen it all, done it all, and is over it all. Their scenes together are dynamite, Gyllenhaal’s hyperactive puppy jumping around Russo’s exhausted big dog. My apologies to Russo for the analogy, but it is apt.

This film is an exquisite indictment of our preoccupation with “reality” television – the uglier the scene, the more the eyeballs watching it. We have become a society that is all about overnight box office, Nielsen ratings, virality. The film is more subtle than this review may indicate. But it is squirmy. It is funny. And it is devastating. I highly recommend it