Well, the 2017 Wilde Awards Ceremony is in the history books. And a truly special night celebrating the best of Michigan theatre is over … for another 365 days.

As a kid, I was obsessed with game shows and awards ceremonies, so to suggest that co-hosting last night with EncoreMichigan’s David Kiley was the fulfillment of a lifelong dream is no hyperbole. And more than a little dorky. If only I had Wink Martindale’s career.

I was humbled to be amongst such theatrical and critical talent last night, and to see so many personal friends receive well-deserved recognition last night affirmed that good people who work hard do earn the spoils. And my buddies still spoke to me after the show was over. #winning

Reel Roy Reviews is now TWO books! You can purchase your copies by clicking here (print and digital). In addition to online ordering at Amazon or from the publisher Open Books, the first book is currently is being carried by Bookbound, Common Language Bookstore, and Crazy Wisdom Bookstore and Tea Room in Ann Arbor, Michigan and by Green Brain Comics in Dearborn, Michigan. My mom Susie Duncan Sexton’s Secrets of an Old Typewriter series is also available on Amazon and at Bookbound and Common Language 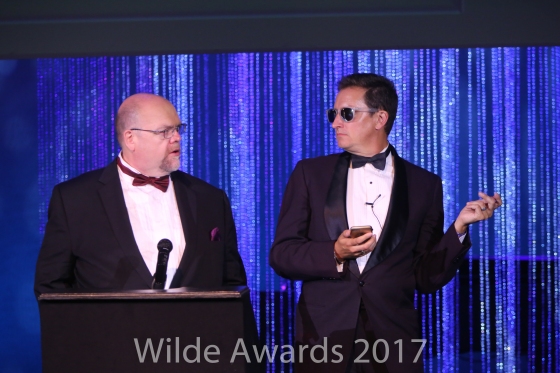 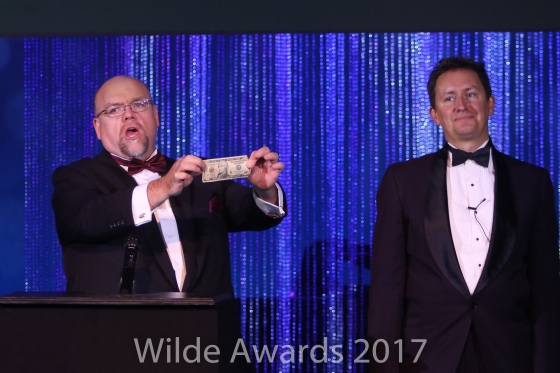 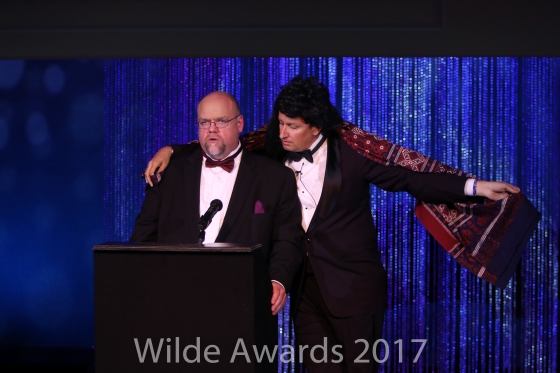 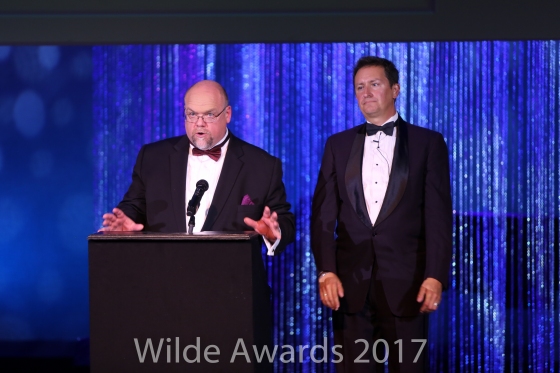 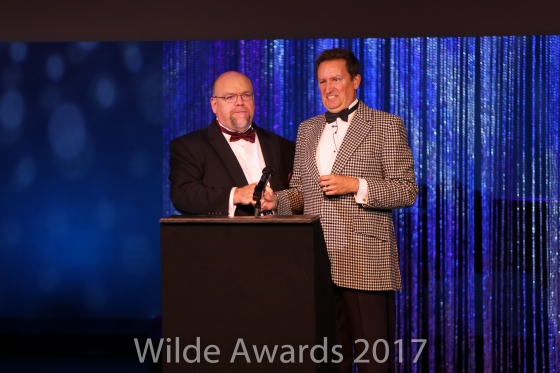 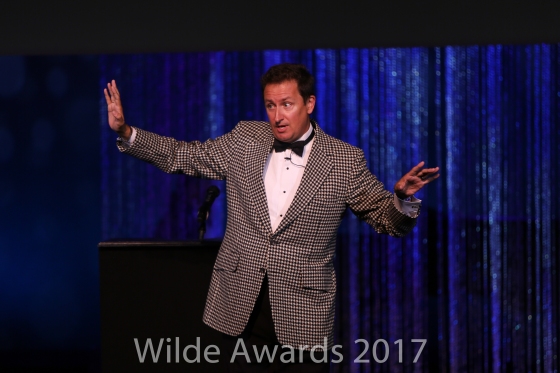 In our household, we really dig The Dio – Livingston County, Michigan’s professional dinner theatre, a true labor of love from Steve DeBruyne and Matthew Tomich. The company recently received a boatload of well-deserved Wilde Award Nominations for recent productions The Bridges of Madison County and The Last Five Years, including nominations for DeBruyne and Tomich themselves individually. (I’m looking forward to co-hosting the upcoming awards night on August 28 with my partner-in-shenanigans EncoreMichigan.com‘s publisher David Kiley.)

So John and I, who had both seen separate productions of the musical revue Forever Plaid about twenty years ago (mine in Columbus, Ohio and starring my delightfully talented buddy Joey Landwehr, and John’s in Ferndale, Michigan), have been eagerly awaiting The Dio’s production. I am happy to report that The Dio’s version honors the storied musical, infusing lovely grace notes of anarchy and poignancy that neither John nor I recalled noticing before.

Directed with graceful efficiency by DeBruyne and ably assisted by Dan Morrison (another Wilde nominee – I’m sensing a trend here), The Dio’s Forever Plaid clocks in at a brisk 90 minutes (not including the dinner service beforehand).

Crisp music direction to bring out the lush harmonies and to keep pace with the mile-a-minute medleys is crucial, and Brian Rose (who also gets pulled into the onstage hijinks) meets and exceeds that requirement. 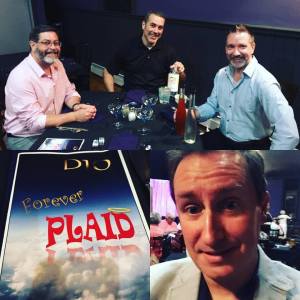 Our friends Rob Zannini and Aaron Latham joined us. Aaron once served as house manager for Andy Williams’ Branson theatre, so he had LOTS of fun insight into this show’s era!

Costume designer Norma Polk gives the Plaids just the right touch of mid-century charm. And Tomich, as always, does a masterful job, leveraging lighting, set, and sound design to make The Dio’s challenging space work beautifully for the show’s unique needs, in this case a nightclub just beyond the Pearly Gates.

The conceit of Forever Plaid is that a quartet of harmonizing AV nerds – who have more affinity for AM-radio staples like Perry Como and Harry Belafonte than for The Beatles or Elvis Presley – are struck down by a busload of Catholic schoolgirls, schoolgirls who are on their way to catch The Beatles’ American debut on The Ed Sullivan Show.

The Plaids were en route to record their first album, but, due to said unfortunate bus collision, they end up in heaven (or some Copacabana proximity of it) to play their final concert, just as America is switching its radio dials from light frothy pop to jangly/jarring rock-n-roll.

The Dio’s cast not only nails the smooth sounds of late 50s boy bands, but they deliver rich characterizations that are as hysterical as they are heartbreaking. As group leader Franky, DeBruyne is the consummate “big brother” – a loving, occasionally frazzled asthmatic, keeping the other three from spinning into apoplexy, aided and abetted by his trusty inhaler. “We will modulate to the stars,” he enthuses in one of his many pep talks to the boys.

Akin to the lovechild of Clark Gregg (Agents of SHIELD) and John Leguizamo, Angel Velasco is a delight as nosebleed prone Jinx, whose debilitating shyness melts away when he gets his brief moment in the spotlight.

James Fischer is a gleeful mix of smarm and charm as Sparky, who can barely master the au courant Spanish lyrics of “Perfidia” when they are written on his hand.

And Matthew Wallace is a tear-jerking ball of sunshine as the bespectacled Smudge, whose escape into the vinyl grooves of his beloved 45 collection (which he carries everywhere in a beat-up suitcase, complete with a not-so-hidden Mickey Mouse decal) gives the show its sweet/sad center.

Anyone who appreciates this era of music (as I do) will geek out over the set list, which includes “Three Coins in the Fountain,” “Undecided,” “Magic Moments,” “Catch a Falling Star,” “Sixteen Tons,” and so on. All are delivered with an admirable balance of reverence and cheek, with subtle-but-damn-funny choreography that winks at the twee style these classic guy groups exemplified.

Showstopper “Lady of Spain,” toward the show’s conclusion, is staged as a salute to The Ed Sullivan Show, complete with references to Topo Gigio, Senor Wences, and the entire “really big shoooow” gang. Sadly, this thought crossed my mind: “In ten years, if someone does this show again, will anyone in the audience know what the hell is going on during this sequence.” Dammit.

The Dio’s Forever Plaid wraps the performer’s nightmare in a gauzy blend of nostalgia, satire, and candy-sweet harmonies. For those who feel marginalized by the status quo, standing before an audience and opening your heart through the magic of lyrics and melody is a revelation, and to have it all taken away in an instant is as tragic as can be. Kudos to this production for honoring the silly escapism of the show while embracing its darker underscore. That is a rich harmony, indeed.

One more weekend to see Forever Plaid at The Dio. And get your tickets now as the last several performances have been sold out.

If the Plaids share an aspirational obsession with achieving “that perfect chord,” the characters in Aaron C. Wade’s directorial film debut Possessive suffer from a more debilitating and prurient kind of obsession. Wade was our exceptional properties master on Ann Arbor Civic’s recent production of The Mystery of Edwin Drood, and he did double (and triple) duty as our show photographer and videographer. Needless to say, I’m a fan.

His first film reveals exceptional potential for crafting cinematic narrative that is as compelling as it is repulsive. That’s a compliment, by the way, and I’m pretty certain he will be quite thrilled with that assessment.

You can find out more about his film by checking out the fan page here, where you will also find a link to the full film as well as updates on its upcoming DVD release. The film’s description reads, “The film Possessive is a romantic thriller story about a man with a well-hidden deviant core and a mentally unstable woman who claims him for her own.” Yup, and then some!

I won’t spoil any of the twists and turns Wade has in store for Possessive‘s viewers, but he has written a script that is as raw as it is confessional. He frames each scene with a visceral immediacy that is remarkably discomforting, and he has cast the production with an eclectic and talented team of local unknowns who exhibit a brave and impressive lack of vanity. Wade’s leads Sarah Lovy and Terence Cover (“Donald Reagan”) wring every bit of bruise black satire from this tragicomedy – two lost souls whose fetishized obsessions with the details of each other’s lives prevent them from ever actually knowing one another.

I look forward to seeing Wade’s future work. He is one to watch. And how great that we have so much remarkable local talent willing to share their gifts with the world. 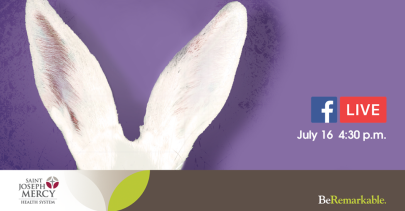 Finally, here is another kind of obsession – the affection of Elwood P. Dowd for his invisible friend “Harvey,” a six-foot, three-and-one-half-inch tall “pooka” who takes the form of an anthropomorphic rabbit in Mary Chase’s Pulitzer Prize-winning play of the same name.

Currently, Chelsea, Michigan’s Purple Rose Theatre (also nominated for a number of Wilde Awards) is performing this theatrical classic. I have not yet seen it, but the reviews have been stellar.

That said, I wanted to give a shout out to my former St. Joseph Mercy Health System colleague Jaclyn Klein who organized a remarkable talk back after the Sunday, July 16 matinee performance. Members of the cast and crew alongside St. Joseph Mercy Chelsea Hospital physicians discussed how attitudes toward mental health have changed for the better (or worse) since the play debuted in 1945. The presentation, ably facilitated by local news personality Lila Lazarus, was live streamed on Facebook. You can catch the video here. Kudos to all!

Harvey runs through August 26, and tickets can be purchased here.