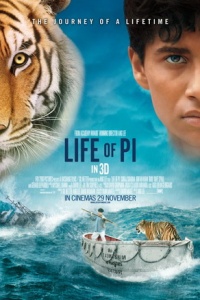 It’s unusual that I don’t post a review almost immediately upon seeing a film. In part, the recent Thanksgiving holiday was the culprit for me not posting a review of the film adaptation Life of Pi sooner…but I also wasn’t sure what I thought of the movie until today. In fact, I am still not exactly sure.

I left the theatre thinking, “Well, that was ok, not great.” The next day, I hated the movie (chiefly for the sunlit depictions of animal-on-animal violence), but now I feel differently. I actually think I like the ambiguity with which the film leaves its viewers.

And, no, I did not read the book…seems to be what everyone asks me when I am ambivalent about a cinematic adaptation of some contemporary literature. [See: any reaction any friend of mine has ever had to my utter distaste for the Twilight franchise.]

Life of Pi is a beautiful film. Director Ang Lee has done a sumptuous job creating the cinematic equivalent of a lushly illustrated children’s book – though I’m not entirely certain it serves the narrative well. In 3D, the sparkling visuals literally leap from the screen, but the ViewMaster quality of such stereoptic spectacle may mislead viewers into thinking the film is a fun holiday family jaunt. It ain’t.

The movie grapples with issues of faith, humanism, animal rights, gender and class politics in an allegorical melange that at times evokes Aesop’s Fables by way of Sigmund Freud. In short, Life of Pi details the adventure of a young Indian boy trapped at sea on a lifeboat with a ravenous tiger. Hijinks ensue.

The “did they/didn’t they” questions of whether the tiger (and a few other animals) are real or imagined and whether they are actually symbolic of man’s inhumanity to man are ultimately unresolved, leaving it to viewer discretion. That is no doubt what the book’s author Yann Martel intended. However, as a cinematic exercise, the movie somehow finds itself at the difficult crossroads of simplistic AND abstruse.

I find myself still pondering the questions raised about faith, the divine within us all, the power of nature, and the pure equality of all living creatures. In that sense, Life of Pi works a kind of big budget, “Hollywood blockbuster as art film” wonder. Yet, I haven’t made up my mind if Ang Lee has achieved an amazing hat trick in filming the supposedly unfilmable…or if he completely missed the mark with this CGI-filled epic.

I guess I will have to get back with you on that one.

Maybe this is one of those times when I should have heeded my friends’ query: “Did you read the book first?”

8 thoughts on “Did you read the book first? Life of Pi”