Niece Gabby before the big show
[Photo by Author]

Have you ever seen a concert that’s just so good that there isn’t much to say about it?

Me neither. But I did last night.

Justin Timberlake and Jay-Z’s tour-de-force concert Legends of the Summer hit Detroit’s Ford Field last night with the gale force of a hurricane. It was a marvel. And it was so good…for once I’m at a loss for words. Or at least a loss for quips.

I’ve seen a lot of concerts this year, for some reason – P!nk, Suzanne Vega, Shania Twain, New Kids on the Block, 98 Degrees, BoyzIIMen – and I enjoyed them all thoroughly. They all pale in comparison to this show.

Why? For one, there were no flying motorcycles, no gymnastic feats, no flying saucers, no aerial acts, no trapeze artists, and no horses. (Well, I will say, I thought the two live horses at Shania’s show were pretty amazing and really sweet.) There was just music and the joy of performing… though admittedly the lacquered red rectangle of a set that turned into a million different light projections was a nifty technical addition.

The D brings folks together! Surprised to find a former co-worker seated nearby [Photo by Author]

Timberlake and Jay-Z shared the stage about 70% of the time, and, reminiscent of the Rat Pack vibe that Timberlake has been rather successfully co-opting for about a half dozen years, the two swells bounced off each other musically, complementing each other’s showmanship beautifully.

Neither performer missed a beat as they sailed through nearly 40 songs in about two and a half hours. The show is briskly paced and does not bore for one second.

Timberlake, who used to suffer a bit from the “hey look what I can do now” curse of too many child performers (and of a couple of show choir show-boaters I avoided during high school), has mellowed at the ripe old age of 32 (!). He moves effortlessly from piano to keyboard to vocal to dance with finesse and surety, his former overeagerness having transitioned beautifully to a playful confidence. 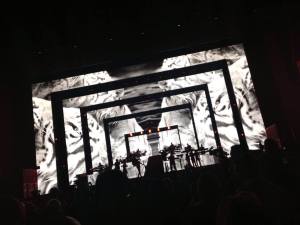 And Jay-Z (who I think is about my age) was like the elder statesman – Martin or Sinatra to Timblerake’s Sammy? I don’t know his music as well as I do Timberlake’s and I’m not always nuts about hip hop (with the shining exception of my fascination with Kanye West) but Jay-Z made me a convert. He approached his rhymes like a jazz musician who isn’t afraid of melody. He swoops and glides and compels the audience to hang on to every word. Mesmerizing.

The show was a graduation present of sorts for our niece as she heads off to college, and I could tell that it was just the right send off. She was on cloud nine during the nearly hour-long departure from the stadium. For once, the exiting crowd was a fun extension of the evening as opposed to a burden as everyone seemed euphoric.

(One notable exception being the truly obnoxious inebriated Kardashian clones seated immediately behind us during the whole show. Note to future concert-goers: just because you have floor seats does not give you the right to keep pushing your chairs against the patrons in the next row. Thank goodness for the sweet folks in front of us, who, sensitive to our plight, moved their seats up to give us more room.)

Yup, kids, there’s a new Rat Pack in town and it’s led by Jay-Z and JT. They only have a few shows left this summer. Don’t miss ’em! (And lookee there…guess I did have something to say after all…and even a quip or two!)

8 thoughts on “Ring a ding ding! A new Rat Pack’s in town: Jay-Z and Justin Timberlake at Detroit’s Ford Field”