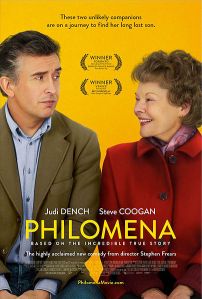 Is it strange that I prefer my Judi Dench (DAME Judi Dench, if you’re nasty) shaken and not stirred? I wish they hadn’t killed her off last year in Skyfall so I could anticipate her next round of icily maternal spy-mastering and forget the dreck that is Philomena.

OK, this British tragicomic trifle isn’t that bad but it ain’t that good either.

I had high hopes for this one as I always enjoy Dench (she could read the phone book for all I care) as, unlike some UK thespians, she cuts through the pretense and offers her perfect cadence, crisp diction, and profound stares in an earthy and relatable way.

Pairing her with the reliably wry and delightful Steve Coogan (see: Hamlet 2 … no, really, see Hamlet 2 … right now!) seems inspired. And, while I’m not much a fan of director Stephen Frears – whose movies just seem scruffily overwrought to me, The Queen notwithstanding – he is a workmanlike director whom I assumed would be wise enough to just wind his actors up and start the cameras rolling.

All that said, Dench and Coogan are just fine, but the script is sorely lacking. This would have been a marvelous hour-long holiday special teleplay on Masterpiece Theatre or something, but as a nearly 2-hour film, the thin material is stretched to its breaking point. Dench and Coogan look quite bored for about a third of the film, to be honest – and so was I.

The plot, as it is, concerns a young girl in 1950s Ireland who finds herself “in the family way” as they say and is slapped in a nunnery to have the child, endure assorted abuses, do a lot of the nuns’ laundry (yeah…really), and then have her toddler torn from her arms and sent to America to live with a wealthy couple. Flash forward to the present, said toddler now would be 50 years old, and Dench is hellbent to find him and finally meet him, with the assistance of recently “sacked” journalist Coogan.

This sets up what is arguably the dullest road trip on film. (I kept hoping for them to cross paths with The Guilt Trip‘s much funnier though critically maligned duo Barbra Streisand and Seth Rogen, but, alas, no.) Coogan and Dench go to America, have some funny exchanges on the back of an airport go-cart thing, have some more fish-out-of-water interactions at the hotel omelette station, and then find her son … via the INTERNET (?!?!). They couldn’t have accomplished that remaining in merry old England?

Then they episodically interview a number of folks with whom her son had interacted over the years, get some sad news (which I won’t spoil), chase down some more people, and then race back to England for a throw down with the nuns who treated Dench so shabbily. THAT last part I enjoyed, and it’s the moment when Coogan finally comes alive with that wild-eyed, exasperated, ticked off Brit thing he does so well.

The movie traffics in a few horrendous mid-90s cliches and attempts to say some deep things about gender, age, class, and faith, but it all comes off as a pencil sketch of a movie that could have been so much more.

I did very much enjoy the movie’s point of view that the intent and the reality of organized religion couldn’t be farther from one another, yet there was nothing groundbreaking nor bold in the telling. Cruel and hypocritical people use the umbrella of the church to get their jollies doing cruel and hypocritical things in the name of “morality.” Irritates the living daylights out of me but I would rather watch a movie tackle that pernicious issue in a stronger, more confident manner.

I seem to be saying this a lot lately, but these actors deserve a much better film. You can plaster “based on a true story” on any flick, but, if the proceedings aren’t compelling, well-written, or thoughtful, you may as well just pick up a copy of Reader’s Digest and save yourself a trip to the theatre.

9 thoughts on “There is nothin’ like a dame…who deserves a better movie: Philomena”