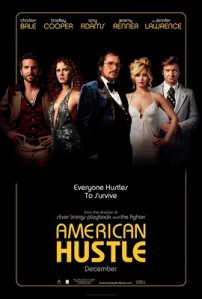 “Sometimes the toxic and poisonous choices are the only ones available to us,” pontificates Jennifer Lawrence, the one (pseudo) bright spot in David O. Russell’s latest sprawling, shaggy dog, broken soul epic American Hustle.

In my humble opinion, the most toxic choices are those artistic ones made by the actors and their director in this simplistic and disappointing misfire.

Hopelessly miscast age-wise as Christian Bale’s wife (!) and playing a derivative of the same neurotic screwball she took to Oscar-winning glory in last year’s Silver Linings Playbook (also directed by Russell), Lawrence seems to be the only cast member having any fun in the ABSCAM-inspired farce. Her zaniest bit comes at the expense of an ill-fated microwave (dubbed “the science oven”) and an aluminum foil covered tray of lasagna.

Don’t get me wrong – Lawrence is as hammy as the rest of her colleagues (Amy Adams, Christian Bale, Bradley Cooper, and Jeremy Renner) but she has the good sense to keep winking at the camera as she collects her paycheck.

I will tell you plainly: I did not like this movie … at all. And I wonder if I’m missing something, given all the critical fawning over it. Or is David O. Russell now one of those “Emperor’s New Clothes”-style directors who has turned in enough awards-show-bait over the years that he can put together a half-baked cartoon and reap endless accolades? Or maybe I’m just a cynical turd.

With such a rich backdrop as skeezy 70s-era New York, populated by no end of colorful sociopaths and parasites, you’d think Russell could have given us a Scorcese-level master class in ensemble betrayals, double-crosses, and deception. Alas, we get a mess of Altman-lite overlapping improv, corny Studio 54 cast-off costuming, and a confusing script that barely scratches the surface of the ABSCAM scandal, padding out underwritten scenes with overdone montages set to cliched Me Decade tunes. Goodbye Yellow Brick Road, indeed.

(And, yes, even America’s goony ditty “Horse with No Name” makes its requisite appearance. Poor song.)