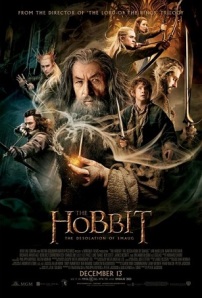 Last year I just wasn’t that nuts about the first installment of Peter Jackson’s planned fim trilogy adapting J.R.R. Tolkien’s The Hobbit. You can revisit my ire here.

And I stand by these words, “If I feel the original [Lord of the Rings] trilogy – where one film = one book – seems a bit padded, you can imagine my distaste for having The Hobbit broken into a wallet-gouging three films.”

HOWEVER, the second installment – The Desolation of Smaug (seriously? these are the best titles you can come up with, Jackson? I guess Attack of the Clones was taken) – is a rip-snortin’, jolly good time.

All the ponderous and self-satisfied back story and set up has been dispensed with in the first film, so the cast and crew is free to let the Errol Flynn-esque, Saturday morning serial freak flags fly. The film is a good thirty minutes too long and suffers yet again from a terribly unsatisfying non-ending ending.

Yet, all of the players are clearly having a ball and that carries over to the audience experience. Benedict Cumberbatch (is he everywhere this year?!?) steals the show – without ever showing his face – as the voice and motion-captured physicality of the titular villain, the dragon Smaug. The very theatre rumbles with his presence, and you can’t (and dare not) look away for a moment.

The rest of the cast acquits themselves nicely amongst the manic proceedings which involve some nonsense about reclaiming a mountain and finding some shiny jewel thing. Martin Freeman comes into his own as our central protagonist Bilbo Baggins, capitalizing on comic sympathies garnered during the first outing.

Ian McKellen is fine but a bit underused in a confusing subplot that involves Orcs, a cheesy looking castle, and the film series’ Big Bad (Sauron). I greatly enjoy Richard Armitage as the brooding Thorin – just when I as an audience member feel totally exasperated by the shenanigans onscreen, he seems to be as well and grounds everything with a sneer and a sidelong glance. Heck, I even like Orlando Bloom this go-round, which is saying something as watching him is typically akin to watching paint dry for me.

New to the series, Lee Pace, Ryan Gage, and Stephen Fry are welcome additions, with Fry bringing an almost Dickensian whimsy to his role as a sleazy mayor of a floating fishing village that makes Popeye‘s Sweethaven look like Metropolis. Luke Evans also adds a fine level of swashbuckling gravitas to the key character of Bard who helps our intrepid band reach the final leg of their interminable journey.

I happened to see this one in Jackson’s much-vaunted “high frame rate 3D” which, once you get past the nauseatingly hyper-crisp visual clarity, completely immerses you in Tolkien’s Middle Earth. It’s like watching a soap opera/video game hybrid … on the sound stage where it’s being filmed with the actors spitting and sweating in your face in real time. Lovely, eh? Not sure I completely recommend it, but it’s worth experiencing … once.

In sum, the film is fun escapist fare with a shot of adrenaline that reminds us why movies can be such a joy. I have no idea what I saw, and I won’t remember 80% of the plot tomorrow … and I don’t much care.

4 thoughts on “Now THAT was fun! The Hobbit: The Desolation of Smaug”