Effervescent. Witty. Intelligent. … Force of nature! These are the best words I can devise to describe Carolina Chocolate Drops’ performance Wednesday night at Ann Arbor’s The Ark.

If you aren’t familiar with this group, stop reading this right now, go to YouTube and check out their stuff. I have never seen so raucous a crowd at The Ark as I did last night, jubilant and joyous and energized by the band’s world-class musicianship and delightfully irreverent intellectualism.

While the lineup of the group has undergone some changes in recent years, lead singer Rhiannon Giddens is a mainstay. (One of the night’s biggest laughs came when she stated, “A certain pop star came on the scene a few years back [the similarly named Rihanna] … and pretty much ruined my life … I wear clothes, though.”

Giddens is a marvel. As much accomplished actress as she is exceptional vocalist and amazing instrumentalist, she breathes life into songs that veer wildly from a 200 A.D. war chant to Blu Cantrell’s one-hit-wonder “Hit ‘Em Up Style (Oops).” She makes every song her own. With wide-eyed wonder, heartfelt intelligence and charm, and an impish smile, she delivers raw roots vocals with operatic technique, all while playing nearly every stringed instrument on stage from mandolin to banjo. Many of last night’s selections focused on the mistreatment of women through the ages and the essential reclamation of female power. That may sound stuffy. It ain’t. 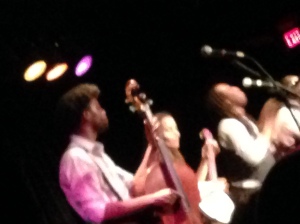 The talents of this quartet cannot be overstated. The Chocolate Drops’ nearly two hour set flew by. Opening with the propulsive and gripping “Country Girl” through their encore “Cornbread and Butterbeans” (which was aggressively  – and quite humorously – requested all night long by one notably vocal fan), the set was a dynamic and earthy array of the group’s best work with a handful of undiscovered gems tossed in for good measure.

I felt like I was at a fabulous party that I never wanted to end. The Chocolate Drops were relaxed and authentic, gracious and inclusive. Their repartee between songs (and during!) was both instructive and hysterically funny, like that of funky college professors whom you adore for making you laugh … and changing your life.

(The Chocolate Drops also gave some local dancers the opportunity to hit the stage and interpret their music as they were playing it. If there ever was a textbook definition of a “happening,” this was it.)

Opening act, alt-country/folk/steampunk husband/wife duo Grace & Tony may have been an acquired taste for some. I loved them! By the time they played their last number, they had completely won me over. (I listened to their CD November in the car today on my way to work, and I highly recommend it – ethereal, zany, and compelling.)

Tony White (brother of The Civil Wars’ John Paul White) knows how to work his hipster winsome charm in service to songs inspired by such diverse topics as Stephen King’s book Salem’s Lot, Frankenstein’s monster, and a couple of serial killers who sold cadavers to universities in the 1800s. These topics sound ghoulish, but Tony (and Grace!) sold these cracked ditties with such saucy glee that the audience was in the palm their hands by the time the Chocolate Drops took the stage.

Thanks to our dear pal Rachel Murphy who introduced all of us to the Carolina Chocolate Drops music. And I, in turn, hooked my parents on the group and have given several copies of their spectacular CDs as gifts.

A plug for The Ark: this is a fabulous, nonprofit venue staffed by volunteers, bringing in internationally known performers many times a week. Definitely check out their schedule, and take in a show there first chance you get!