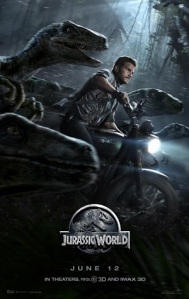 Regarding this weekend’s big summer blockbuster release Jurassic World, my animal advocate mom posted this on my Facebook wall earlier today: “But are they mean to dinosaurs? Are the dinosaurs the villains? Is it a glorified hunting movie? Inquiring minds want to know these things? Would Sarah Palin approve and reignite girls to wear clean sportsy clothes and hiking boots? Posing with bears and rabbits and deer and giraffes pretending they killed them? Because if so, my friend… ha!”


I can pretty safely say that it’s not a glorified hunting movie, and I don’t think the Sarah Palin-types would like it, as most of their stand-ins in the film get eaten pretty quickly by roaring, teeth-gnashing dinos. However, the film is a typically schizophrenic Steven Spielberg production (he executive produced this installment but directed the original Jurassic Park way back in 1993). Is the film making a satiric point about how horrible humans are to the environment, how we reap what we sow, and how we deserve any and all climate change payback which results from our rampant over-development of land, air, and sea? Or is Jurassic World just more yuppie disaster porn designed to sell Happy Meal toys, glistening Jeeps, and Patagonia safari gear? I’m still scratching my head. I just don’t know.

When you look at Spielberg’s filmography, as both director and producer, from Jaws to Close Encounters, E.T. to Gremlins, Poltergeist to, yes, Jurassic Park, he returns time and again to themes of man’s infinite ineptitude and limitless arrogance in the face of a planet, nay universe, full of mystery, wonder, and violent counterbalance. For Spielberg, karma is a four-color funny – build a beach home, destroy a burial ground, feed a cooing creature after midnight, genetically modify a reptile for an overpriced amusement park? You’re gonna get sliced, diced, and eviscerated, all to the strains of a symphonic John Williams score.

And you know what? That is ok by me!

The problem with Spielberg’s films is he wants to have his sardonic cake and eat it too. Spielberg’s movies are expensive and they make a lot of money; whether directed by Spielberg or under the auspices of Amblin Entertainment or DreamWorks, these big budget boogers are sold to every demographic quadrant an army of polished marketers can dream up, so ultimately the flicks dare not go too far. We don’t want to alienate any viewer, slurping over their Mr. Pibb and Kit Kat bites (yeah, that’s what I had today), and, consequently, any unique and incisive POV gets diluted in a gauzy haze of product placement, no matter how postmodern and ironic said placement may be.

No, Spielberg did not direct Jurassic World. Those honors (?) go to Colin Trevorrow (Safety Not Guaranteed), but Spielbergian DNA is all over this sucker. Sorry, Colin. I can only imagine this must have been like being hired for a dream design job at Apple, only to find they really just want you to arrange, into artful displays, the new Apple Watches when they arrive in stores.

Jurassic World does its job efficiently and effectively. It entertains, and it will make a mint … but it has no real raison d’etre. (Yeah, I got all fancy. It doesn’t need to exist.) It basically lifts the very plot from the first film, but this time we get Bryce Dallas Howard (how is this mugging, one-note actor still making movies? oh, right, Ron Howard’s kid) instead of Richard Attenborough and Chris Pratt instead of Sam Neill. Jeff Goldblum is now Irrfan Khan, and Wayne Knight is now Vincent D’Onfrio. B.D. Wong? Still B.D. Wong – that man must be an automaton as he hasn’t aged one freaking bit.

Seriously, these actors may be playing different characters (obvi) twenty-some years later (natch) but their narrative functions are still the same.

Portraying a grizzled velociraptor trainer (and apologist), Pratt is the best thing in the film by far. Wearing a steady exasperation that seems to suggest he wishes he had a better script with which to work, Pratt does a fine job channeling Neill’s gravitas: just because you can make a dinosaur does mean you should make a dinosaur. Pratt is a delight, one of the few actors in the film who seems to believe where he is and what is doing and who has a genuine affection for the misunderstood creatures in this world (dino or otherwise).

Howard fares less favorably as the Isla Nubar theme park’s chief executive who in sexist Hollywood shorthand is an out-of-touch, controlling, insecure ninny with a severe bob, impractical shoes, and an ever present iPhone. Ugh. It doesn’t help that her emotions range from sweaty to panicked to rigid to … sweaty.

D’Onofrio is a kick in an underwritten role as a nebulous InGen contractor who wants to use these “assets” (that’s how mean people refer to animals in this cardboard world) for military purposes. Boo hiss. Blessedly, he has the chops to fill in the mile-wide gaps the script allows. He exudes the oily opportunism of those post-millennial types who see our natural resources simply as walking/breathing/pooping dollar signs. He may as well have had Monsanto painted on his backside.

At one point, Wong’s character (you may recall he is the ethically-dubious geneticist who figured out how to fabricate dinos from whole cloth in the first place) intones what passes for a philosophical thesis in the film: “To a canary, a cat is a monster. We are just used to being the cat.” Yup, amen to that.

There is a perverse joy in seeing blank-faced, cornfed tourists hoisted by their own petards, tossed like beach balls from one pteranodon to another above Jurassic World‘s Starbucks/Margaritaville/Pandora encrusted main street. I also loved the jab at Sea World with a dino sea creature (mosaurus?) that grudgingly entertains a nautical football-arena-size stadium of onlookers but gets the last laugh when he/she gobbles a few vacationers down.

Ultimately, by the final act, when the Frankenstein’s monster dino “Indominus Rex” (cooked up by Howard and Wong to sell more t-shirts and key chains) has shredded the park top to bottom and is now fighting a pack of velociraptors and a t-rex for no real explainable reason, I was in a Mr. Pibb/Kit Kat coma. I just didn’t care.

And the adult in me kept thinking … Who is going to put these dinos back in their paddocks? Is the Hilton corporation going to rebuild their opulent hotel on Isla Nubar for future product placement? Who is going to clean up this mess, and will Starbucks return to sell more mocha-choca-lattes? And why didn’t the dinos just finish off all the humans? That’s a movie I’d pay $10 more bucks to see.

8 thoughts on ““To a canary, a cat is a monster. We are just used to being the cat.” Jurassic World”