Like the old E.F. Hutton commercials, when Rebecca Biber speaks, everybody listens. Or, more appropriately, when my musically gifted pal Rebecca Biber invites you to attend a local arts and culture event, you go because she has lovely, free-thinking, quirky taste that is always spot on.

Rebecca and I bonded over the years, performing together in a number of local productions, but our friendship has transcended the generally ephemeral “summer camp” nature of most casts (“I’ll write you! I promise! We’ll be best friends foreeeeeverrrrr!!”). She’s even contributed a time or two to this blog right here … when she thought my take on a particular film might have been a bit misguided. Now, that‘s a strong friendship.

So, per Rebecca’s recommendation, off we went arm-in-arm this past Saturday night to Ann Arbor’s Power Center to view an Ann Arbor Summer Fest performance by improv comics Colin Mochrie and Brad Sherwood. The duo is arguably best known for their work on ABC’s comedy game show Whose Line Is It Anyway? hosted by Drew Carey, adapted from the original BBC series, and running from the late 90s through the early 00s. The show was recently revived … yet again … on the CW, with Aisha Tyler as its host and many of the same cast members.

[Dropping some knowledge, courtesy of Wikipedia: “The title of the show itself is a comedic riposte to another radio show that moved to television, What’s My Line, merged with the title of a 1972 teleplay (and eventual theatrical play) Whose Life Is It Anyway?“]

Confessional: I don’t much care for improv comedy. It always seems rather half-a**ed and much funnier to the performers than it is to the audience, like observing self-indulgent, marginally witty children sweatily play in the backyard. I also rarely watched the tv show in any of its incarnations, though, admittedly, when I did, I thought the performers displayed an impish sparkle and zany glee that transcended any quibbles I had with the genre.

I’m happy to report, that, on the whole, Rebecca’s recommendation as well as my heretofore superficial appreciation of the Whose Line cast were validated by Saturday’s show.

Mochrie and Sherwood’s “Scared Scriptless” (cute name) show runs a brisk 90 minutes. (The older I get, sometimes, that is the only selling point I need.) It is a warmly, lovingly shaggy mess of around half a dozen “improv games” (don’t worry – that phrase usually turns by blood to water too) that involve audience members, both onstage and through solicited topics/suggestions.

As I understand, many of these games were also played as part of the TV program, so longtime fans will be greatly rewarded by “sound effects” (two audience members supply silly noises in audio accompaniment to the onstage shenanigans), “confessional” (wherein Sherwood has to confess to a fictitious crime by guessing via a series of increasingly absurd clues what Mad Libs-style topics the audience has given Mochrie), and “puppets” (whereby two audience members maneuver Mochrie and Sherwood about the stage in reaction to their Looney Tunes repartee). It is a testament to the duo, who have been touring for fourteen years, that these exercises remained fresh and joy-filled. Sherwood particularly seemed to take great delight in the audience interaction and the comedic challenges placed before him, say, when he and Mochrie were forced to traverse blind-folded and barefooted across a mouse-trap strewn stage telling a story where each of their exchanged lines had to begin with a subsequent letter of the alphabet.

My favorite segment, though, involved Sherwood and Mochrie inventing lyrics to a randomly selected popular tune within the context of a particular scenario (for some reason they lived in a place called “Needlepoint Land,” but them’s-the-nonsensical-breaks with improv). Mochrie ably demonstrated that he is no songsmith, but Sherwood was a revelation, with a strong musical comedy voice and a jaw-dropping ability to invent clever, bizarre, and authentically funny rhyming lyrics on-the-spot. Loved. That.

If these sweet-natured, good-hearted improv clowns find their way to a town near you, give them a shot. Sit in the balcony, as we did, if you want to avoid getting yanked onstage and being forced to honk like a goose or to sing a Beatles ditty. Oh, and if Rebecca Biber suggests you check out a certain entertainer or show, go do it. You won’t be sorry! 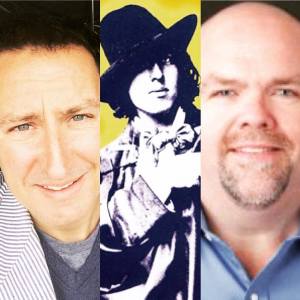 Save The Date! August 28 at West Bloomfield’s Berman Center for the Performing Arts: Encore Michigan’s 2017 Wilde Awards will celebrate the best and brightest that Michigan theatre has to offer!  “Publisher David Francis Kiley and actor Roy Sexton will co-host the award show.” Yeah. You read that correctly. Heaven help us all. More info here.

“We had another remarkable season of wonderful performances, new scripts, touring shows, and it all makes the voting extremely difficult,” says Kiley. “It’s difficult every year, and there is a lot of debate among the critics after we have scored each show that we review for technical and artistic expression. … There are going to be many improvements to the show. The entertainment is going to knock people’s socks off, and the award show aspect is going to nip along at a faster pace. We are making sure there is more adequate bar service, which was a bit of a problem in 2016. This is going to be a show that not only the industry is going to want to come to, but theater lovers. It’s going to be a fun, fun night.”

And, if all else fails, apparently there will be better bar service. 🙂