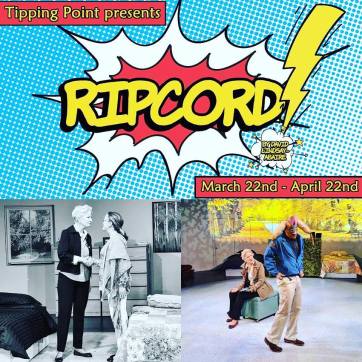 One day you wake up, and you find you relate to characters and situations that just the other day felt safely, pleasantly distant and remote. In our home, we have a nightly ritual of watching an episode of a (now) classic sitcom right before going to sleep: Everybody Loves Raymond, Will & Grace, Friends, and increasingly The Golden Girls. I always had finite patience for the self-absorbed whimsy of Friends, and, now, I can barely stomach the show. Once, I thought Raymond’s Marie and Frank Barone were an affectionately nuanced portrayal of meddlesome parents; now, I completely relate to their affable frustrations over “young people” who don’t appreciate their elders’ hard-won advice and perspective. And The Golden Girls? Well, let’s just say, someone get the lanai and the caftan ready. I’m on my way.

It is through this lens, then, that I approached TippingPoint Theatre’s Michigan premiere of Ripcord!, a comedy by David Lindsay-Abaire (Pultizer Prize-winner for Rabbit Hole). Ripcord!, on its surface, is Whatever Happened to Baby Jane? if written by someone who actually likes women. Similarly, the narrative is an escalating emotional arms race between two grand dames, aging in place and trapped in one location (in this instance, one of those “high end” independent senior living facilities). However, unlike Baby Jane, the women have agency from having “seen it all” (think Elaine Stritch’s seminal performance of Sondheim’s “I’m Still Here”); they wear some kicky resort clothes (think Golden Girls with better tailoring and fewer shoulder pads … fun costume design by Shelby Newport); and no one gets served a pet parakeet on a platter (although there is a LOT of business with food being brought up from the cafeteria … I kept waiting).

The Blanche and Baby Jane of Ripcord! are Abby (played with broken glass sparkle by Ruth Crawford) and Marilyn (a heartbreakingly impish Susan Craves). Abby has lived in the same room for four years, mostly alone, as her brusque bravado drives off anyone unfortunate enough to be assigned her roommate. Along comes Marilyn, a ray of sunshine with an iron will – Little Orphan Annie as designed by Sun Tsu. In the 80s, yes, Abby would have been played by Bea Arthur, and Marilyn by Betty White. In this contemporary milieu, Crawford and Craves couldn’t help reminding me of Jane Lynch and Carrie Fisher, respectively. I’m uncertain whether that was intentional on the part of director James Kuhl and his production team or just happenstance, but that dynamic contrast in type and in look works really well.

Marilyn is determined to melt the permafrost around Abby’s cold heart, and Abby is hell-bent to get this bounding golden retriever puppy-meets-Marquis de Sade jettisoned from her life forever. Or,at least have her relocated to a newly vacated room downstairs. Consequently, they place a bet. If Marilyn can scare Abby (who claims no fear), she gets the better bed in their room with an epic view of the park and all the sunlight she can stand. If Abby succeeds in making the relentlessly chipper Marilyn angry, Marilyn vacates the premises, only to be seen at the occasional bingo night. Hijinks ensue.

As plays go, Ripcord! is, in fact, more sitcom than Broadway. The narrative is too episodic by half, and thinly drawn supporting characters come and go primarily as forgettable story beats and harmless complications. However, Abby and Marilyn–built as they are on familiar, near-mythological archetypes (broken monarch, trickster god) – are the show. Lindsay-Abaire wisely commits the lion’s share of the piece to exploring the debilitating isolation and the liberating joys of aging, as evidenced through the pranks, shenanigans, and outright cruelty these women exact upon one another.

At the end of the day, neither Abby nor Marilyn much gives a rat’s-patootie what anyone thinks of them. That is refreshing. Otherwise, we would have yet another tired male-crafted narrative pitting one woman against another. Ripcord! pulls just shy of that, offering a study of two humans who have suffered devastating setbacks, chiefly at the hands of their own spouses and/or children, and who find themselves thrown together like randomly assigned college roommates in their “golden years.” Together, they discover their authority and their appreciation for each other through the artificial tension such circumstances naturally bring.

All of that said, this is the kind of show that TippingPoint does so well. Acerbic, witty, expertly paced, and polished, Ripcord! rarely misses a beat. At Saturday night’s performance, there were some minor flubs here and there, and an actor or three stepped on each other’s lines–all of which will disappear as the run progresses and this already incredible ensemble tightens the performance. Director James Kuhl has cast the show expertly, with two leads who take the sitcom tropes the script hands them and turn in masterfully crafted, compelling character turns – believable humans who are as delightful, maddening, confounding, and damn funny as any family member you may get trapped with at a Thanksgiving dinner.

Dez Walker is great deadpan fun as Scotty, the nursing attendant and foil for the worst these two rivals can dish out. I don’t want to spoil the surprises, but let’s just say their warfare may or may not include skydiving, haunted houses, surprise relatives, muggings, CraigsList phone pranks, and drug-laced peach cobblers. Walker’s reactions to it all are priceless and pleasantly understated. At times, I felt I was watching a Tom and Jerry cartoon brought to life.

Vanessa Sawson, Jason Bowen, and Patrick Loos round out the cast, playing an assortment of family members and haunted house performers (there is an ironic joke in there somewhere). They all do fine work and have some sharply comic moments. Bowen is comedy gold as said mugger who devises an unfortunate and hysterical use for the “legs” in his pantyhose mask.

The ensemble suffers at times, however, from tonal inconsistency. Whereas Craves, Crawford, and Walker imbue their characters with a believability and a subtlety that contrasts nicely and, at times, poignantly with the proceedings, the other performers occasionally devolve into a broader comic style that felt a bit jarring. It’s a minor quibble and is as likely a function of the play’s construction as the performance itself.

The cast is aided and abetted by clever, kitschy, surprising production design. As noted, the costumes by Newport are divine. The efficient and evocative set by Monika Essen is comprised of a series of modular units that can serve as the independent living facility, haunted house, park, etc. Essen supplements the physical set with some eye-popping projections and some nifty animation, all of which creates a captivatingly immersive experience.

Sonja Marquis has a blast with the sound design, weaving techno, hip hop, and some delightfully daffy dance remixes (Carmina Burana? BRILLIANT!) into the musical cues. I would love to download that soundtrack. I particularly appreciate that Marquis resists the urge to employ “age appropriate” music (whatever the hell that would even mean) and delivers a rocking score that gives as good as it gets and adds a fantastic level of manic urgency to the leading characters’ conflict. I also geeked out that the poster and program cover (by graphic designer Quintessa Gallinat) go for POP! over lace doilies, with a fab Roy Lichtenstein spin on the play’s iconography. Well played, TippingPoint! 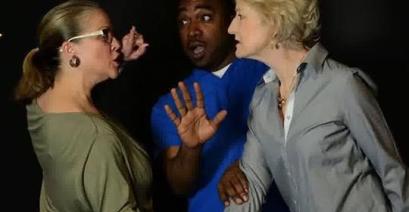 If, like me, you feel your age every time you read a headline, turn on the radio, or just get out of bed in the morning and if you wonder sometimes whether all this running about and people-pleasing we do in life really matters, you will love Ripcord! If you think these experiences and feelings are still tucked away behind the nebulous and protective curtain of “your future,” then you must see Ripcord! Now. Let’s kick ageism in its collective ass. This isn’t a play about “old people.” This is a play about all of us and the need for kindness and empathy and acknowledgment in. the. moment. Attention must be paid

2 thoughts on “Attention Must be Paid: Tipping Point Theatre’s “Ripcord””