In my estimation, there are chiefly two types of films for young people:

There are the ones where a kid’s innocent yet wary POV on a grown-up world helps both adults and children better understand how tender and tenuous our collective grasp on daily reality truly is (e.g. To Kill a Mockingbird, Babe, The Black Stallion, E.T.).

And then there are those where sheer nonsensical anarchy takes over and society is seen through a colorfully madcap lens to rationalize how unfair and frustrating life can be (e.g. Willy Wonka and the Chocolate Factory, Toy Story, The Princess Bride, The Incredibles).

Today, I saw fine examples of each form: The Book Thief (on DVD) and Mr. Peabody & Sherman (still in theatres).

The Book Thief somehow escaped my attention last fall when it was released. I think it was unjustifiably lost in a shuffle of Oscar hopefuls and critical muckraking (the latter of which appeared perilously close to sour grapes pettiness regarding the runaway success of the young adult novel by Markus Zusak on which the film is based).

Starring Geoffrey Rush (who turns in a refreshingly nuanced and subtle performance) and Emily Watson (always magnificent, walking that fine line between heartwarming, poignant and world-weary) and introducing Sophie Nelisse, The Book Thief offers a look into the atrocities of Nazi Germany from the perspective of a child growing up in a small town where survival is the primary concern.

Akin to essential classic The Mortal Storm, starring Jimmy Stewart and Margaret Sullavan (if you’ve never seen it, you must), The Book Thief relates the sweaty, creeping terror of totalitarian Nazi rule as it insinuates itself into the daily lives of everyday citizens. I remember thinking as child, “How could German citizens let this happen?” Both The Book Thief and The Mortal Storm do a wonderful and chilling job of showing that progression.

(And as an adult in post-millennial America, both films give me pause about where some of our political and business leaders might try to take us.)

Rush and Watson’s characters, not altogether altruistically, take lost soul Liesel (played by Nelisse) into their home. Liesel’s birth mother is a socialist who gives her daughter and son up, ostensibly for the children’s safety; the brother is lost to some unidentified ailment en route to their new home. As the film proceeds, we realize that flinty Watson and flaky Rush are actually deep-feeling souls whose private disgust over the direction Nazi Germany takes is balanced with an equally heart-wrenching desire to protect their adopted daughter, their unconventional life, and those human beings who enrich their existence, including a young Jewish man (ably played by Ben Schnetzer) who camps out in their basement to avoid persecution.

The film’s title is a nickname for Liesel, whose character is illiterate at the film’s outset but who learns the liberating power of language and free thought from the books she is able to swipe, despite Nazi attempts to limit citizens’ access to certain literature, art, and music.

John Williams’ score as always is lush and evocative and practically a character unto itself.

There is great supporting acting work throughout, including Barbara Auer as the mayor’s kindly wife who has her own literary secrets, Nico Liersch as Liesel’s charmingly unconventional best friend, and Roger Allam as, yes, the omniscient narrator Death. It is this latter aspect that gives the film its emotional resonance and sharp edge. Death is not spooky or malevolent but practical and even kindly, giving young and old alike a reminder of our inevitable mortality and that every moment should be lived as authentically and kindly as life will allow. 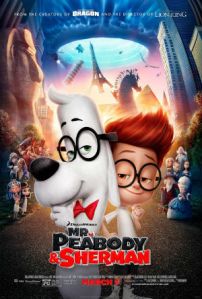 Now, on the other end of the family movie spectrum, we have Mr. Peabody & Sherman, based on my personally favorite segment of Jay Ward’s 1960s TV classic series Rocky & Bullwinkle.

For those unfamiliar with the concept (or how unlikely it is that I am pairing this movie with The Book Thief – just the luck of the draw in today’s viewings!), Mr. Peabody & Sherman relates the tale of a genius bespectacled pooch who adopts a not-so-genius bespectacled boy, invents a time machine (among many other scientific breakthroughs), and takes his son on many educational excursions throughout history.

The premise from the TV show essentially remains the same in this big screen adaptation, including Mr. Peabody’s endless series of painfully-so-unfunny-that-they’re-actually-funny puns and the crackpot Looney Tunes-meets-Your Show of Shows-era-Mel Brooks/Sid Caesar takes on historical figures as varied as King Tut, Marie Antoinette, Agamemnon, and George Washington.

The drawback for me would be DreamWorks Animation’s needless obsession with fart/poop/butt jokes. There were at least a dozen too many; they were jarring and dumb and an ugly distraction from what was otherwise clever and charming.

As in any good kids’ flick, despite the cartoon mania, there is a very real and haunting tension: that the adopted (and clearly adored) Sherman will be taken away from his doting canine father Mr. Peabody because the conventional world cannot accept such an arrangement.

Allison Janney does fine voice work as a beefy busybody social worker who will stop at nothing to upend their happy life, and Stephen Colbert and Leslie Mann (someone needs to cast them as a live action movie couple stat!) are starched-shirt-hysterical as a rival set of parents (think God of Carnage-lite) whose bullying daughter is bitten by Sherman at school. (Hence the overreaction of all the “sensible” humans that a dog is raising a boy as his own son.)

Mr. Peabody throws a dinner party to try to settle the matter in a civilized fashion, the kids monkey with the Way-Back Machine, something wonky happens to the space-time continuum, and all sorts of silliness ensues.

Directed by Rob Minkoff (Stuart Little), Mr. Peabody & Sherman is weighed down by its own episodic structure as we careen among historical eras, and, sadly, the ending is the typical lazy “let’s blow some stuff up and regurgitate some nonsensical pseudo science to wrap everything up” conclusion that Hollywood always tacks on these kinds of films.

But for a few brief and shining moments, Mr. Peabody & Sherman breaks through the absurdity and offers sweet-natured messages of tolerance and joy and, yes, like The Book Thief, the necessity of free thought and the critical importance of family, no matter how left-of-center.