A young woman, torn between two worlds, discovers her voice and her resolve and becomes a champion of her people in the face of tyranny. This trope has long-defined a good chunk of young adult fiction from The Wizard of Oz to The Hunger Games, Alice in Wonderland to Divergent. However, those works use allegorical fantasy to safely distance the reader from the tumult of real-life. Oh, and those works all feature a female protagonist who is white. There may be a sidekick or two of color, but that’s it.

Angie Thomas jettisons the allegory and brings us face-to-face with the racism, sexism, and economic disparity crippling our country in her young adult novel The Hate U Give (title courtesy of a 2Pac lyric), now sure-handedly adapted into film by director George Tillman, Jr. (Soul Food, Barbershop, Notorious).

African-American teen Starr Carter – portrayed in the film with exceptional fire and presence by Amandla Stenberg (The Darkest Minds) – is a luminous and high-potential presence at Williamson, her all-white, upper-class high school . Her principled parents (Girls Trip‘s Regina Hall and Fences‘ Russell Hornsby delivering just the right mix of haunted bravery and pragmatic compassion) have kept the family residing in neighboring Garden Heights – a hardscrabble community riddled with gun violence, drug lords, and countless dead ends – to remain close to their roots, but they drive their kids to Williamson to give their progeny a leg up on their education. I suspect there is a lot that could be written about those parenting choices (pro and con), but that is the narrative conceit around which The Hate U Give‘s story revolves.

One night, after attending a house party in her home town, Starr witnesses one of her dearest and oldest friends (a heartbreakingly charming Algee Smith – Detroit) gunned down in a routine traffic stop. The narrative then tracks her challenges overcoming her own fears and those of her parents – re: taking a stand and testifying – as well as her burgeoning realization that her well-intentioned but myopic classmates don’t know the first thing about the daily dangers Starr faces in her own neighborhood.

Tillman’s film is a gut punch, particularly in its nuanced first hour, as we are introduced to Starr’s world(s) and trace the tricky balancing act she performs every day. If there is a flaw in the film, it is that – due to the time-limitations of film versus novel – the Williamson side of Starr’s life is relatively unexplored and her school chums remain ciphers, chiefly providing the occasional plot complication and little more. 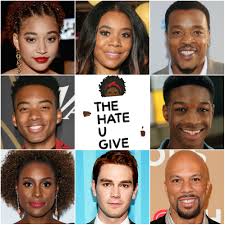 The supporting cast is exceptional: Selma‘s Common as Starr’s loving but arguably hypocritical policeman uncle who collects a paycheck while (sort of) accepting the party line to “shoot first, ask questions later”; Captain America‘s Anthony Mackie as a local drug lord who was once best buds with Starr’s father and whose children remain Starr’s pals; Riverdale‘s KJ Apa wringing his Archie Andrews best from an underwritten role as Starr’s boyfriend; and singer Sabrina Carpenter (“Thumbs“) as one of Starr’s besties who devolves into the junior version of Laura Ingraham before Starr’s very eyes.

Apparently, I will spend this autumn in the multiplex in a puddle of tears. A Star is Born gutted me, and, now, The Hate U Give had the same impact. The latter film grows increasingly predictable as it reaches its climactic moments, but it is so well-executed with such authenticity and is so sensitively relevant to the callous and cruel days in which we are living that I found myself having about 12 ugly cries through its running time. I attribute that, not only to Tillman’s confident and workmanlike direction, but to performances – particularly Stenberg’s, Hall’s, and Hornsby’s – that stubbornly refuse to embrace cinematic escapism. This family is a loving one, rife with disagreements, but ultimately wanting to rise above the fray and simply live.

We all want that. We all need that. We all deserve that. Yet, every day when I read the headlines, that seems to be an increasingly unattainable pipe dream.