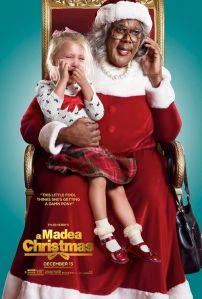 Well, when I started this adventure called Reel Roy Reviews a little over a year and a half ago, my first review – perhaps just to telegraph to readers how few standards I had – was of Tyler Perry’s Madea’s Witness Protection Program. No lie – proof here.

As if to come (shamefacedly) full circle at this holly jolly holiday time of reflection and penance, this fifty-eighth (!) entry in my weird, lightly trafficked corner of blogdom highlights Tyler Perry’s A Madea Christmas. And, yeah, we still should have known better. It is just dreadful.

(Tyler Perry, that dollar store indie-auteur, is helping me formulate a new supposition: the more possessive apostrophes in a film’s title, the worse the cinematic outcome.)

Perry is no dummy. His bread and butter is Madea, and, as poorly (under)written as his scripts are and as shoddy as his direction, that character – a loving (and honest) homage to his mother – remains the bright spot in the Perry universe. As broadly as she is drawn (sometimes spinning perilously into full-blown cultural offense), Madea as a characterization, I would argue, belongs in the cinematic canon of franchise comedy series players like Abbott and Costello, Ma and Pa Kettle, or Francis the Talking Mule.

Strange company, I realize, but when Perry is firing on all saucy cylinders, his Madea transcends the sub-par narrative context in which she’s placed and can make me laugh like a kid watching Laurel and Hardy reruns on a rainy Saturday afternoon. It’s just too bad Perry as a filmmaker doesn’t know his limitations – imagine if Hal Roach thought he was Ingmar Bergman.

This brings us to Perry’s latest – A Madea Christmas – which is one of his weakest efforts to date. He bears the remarkable distinction of actually getting worse as a filmmaker the more movies he directs.

As an aside, the high-water mark for the series (which isn’t saying much) remains Madea Goes to Jail, which leverages Madea’s ongoing rage at the cosmic ineptitude of mankind to great effect, most notably during a run-in in a Kmart parking lot. Madea Goes to Jail also has the good sense to include Viola Davis (at a time before we all realized how amazing she is) in one of Perry’s trademark melodramatic subplots: some nonsense about Rudy from The Cosby Show becoming a drug addicted prostitute … and then finding Jesus. Davis, whose actorly commitment could make an episode of Full House bearable, plays the prison counselor that gets Rudy (and Madea) back on track and offers one of the rare instances of a compelling character-driven performance in a Perry film.

A Madea Christmas on the other hand features the magical acting chops of … Larry the Cable Guy. And he’s one of the most subdued (and funny) people in this mess. Color me astounded. Kathy Najimy (who should fire her agent) and Larry play liberals-in-rednecks’-clothing whose son secretly marries Madea’s niece. Madea, of course, is fine with all of it, as long as she gets to crack wise and crack heads. The girl’s mother, histrionically played by Anna Maria Horsford as if she thinks the movie’s audience is located somewhere on the moon, is less than thrilled by her daughter’s choice of life mate. Bad 1980s TV movie hijinks ensue.

There’s a bizarre subplot about a dam that has cut off water from the town and is robbing the hateful farmers there of crop-growing potential; a Christmas pageant sponsored by the conglomerate that built said dam and that now wants to deprive the town of their “Christ in Christmas” by making the event a non-denominational “Holiday” pageant (with no – gasp! – nativity); and a school that apparently is located right inside the town hall (!), has six students, and is run by sweet-faced principal Lisa Whelchel (yeah, The Facts of Life‘s Blair) whose notion of the separation of church and state is decorating her classrooms with Christmas-light-festooned crosses. It’s like Sam Walton’s fever-dream.

Mr. Perry, I implore you – take some time off. Cranking out two movies a year does not a great director make. Assess what you do well (fish-out-of-water comedy, class warfare satire) and what you don’t (poignant melodrama, humanist messages) and be brave enough to let someone else … anyone else … direct you (as Madea) in one of your scripts. That would be the best holiday gift of all to those moviegoers (like yours truly) who keep waiting (but probably not for much longer) for you fully to realize your potential.

11 thoughts on “Yeah, I know. We should have known better … the sequel: Tyler Perry’s A Madea Christmas”