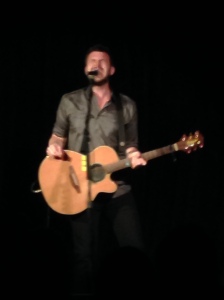 I’m not much for folk music (see my review of Inside Llewyn Davis) or, for that matter, guitar-driven singer/songwriters. So, when our friend Bonnie offered an extra ticket to see Howie Day at Ann Arbor’s The Ark, I wasn’t sure what to expect.

I had vague memories of Day as an early aughts pop/rock folkie with the following attributes: an inescapable (and kinda bland) radio hit “Collide,” a reputation as having been Britney Spears’ rehab rebound boy toy, some TMZ-style controversies that involved berating flight attendants and throwing cell phones, and a Russell Crowe-esque fiery temper (that last point being the most intriguing to me).

It’s a shame that this is his legacy to ignorant lay-people like yours truly, because he is phenomenal.

The joy of seeing a musician live when you know pretty much none of their songs is that every tune is a new discovery. (My apologies to those Howie Day fans looking for a set-list or some other detail from tonight’s show. I have no idea what the songs were titled.)

Day was such a compelling presence, with just his honey-husky voice, his Liev Schreiber-ish look, a guitar and a microphone, and (his secret weapon) some astonishing gizmo that let him record, dub, layer, and re-layer his own voice and instrumentation in real time. I don’t know how else to describe it.

I’m sure someone out there knows the name for this, but he had a device on the floor that he would tap with his foot and record a snippet of guitar or voice or some other noise that would then loop and repeat and become the accompaniment for any given song. This technique – which was part dusty troubadour, part Ibiza-bound DJ – was transfixing and transporting.

This beat-infused folktronica (lord, I always hated that term, yet here I am using it) offered a surreal soundscape for the heartache dripping from every lyric. While Day gave sparkling between-song  patter (he kept returning to the notion that he really should have seen the film Noah today if he was going to perform at a venue called “The Ark”), every song he played related the tale of someone abandoned by love, by friends, by life. Haunting doesn’t even begin to describe the musical stories he wove.

Opening act Shane Piasecki was a sunny counterpoint to Day’s melodic solemnity. Piasecki – resembling some mashed up hybrid of Ed Norton, Bob Dylan, and James Franco – captivated the audience with his shaggy dog charm, playing guitar and harmonica and vocalizing, with studied casual aplomb. His numbers all had a loping frat boy charm but with a musical sophistication that belied his youthful demeanor. He had the audience in the palm of his hand … and that was prior to him telling us he had to rush back to his mischievous dog at the hotel where he’s staying before the establishment lost every last pillow to the canine’s canines.

If these two wandering minstrels find their way to your town (or somewhere nearby), do not hesitate to check them out. You won’t be disappointed. I, for one, bought all of Piasecki’s musical output (four CDs – $35 in total) at the merchandise table, and Day’s are now added to my Amazon cart for ordering posthaste!

8 thoughts on “Guitar heroes and heartaches: Howie Day at Ann Arbor’s The Ark”