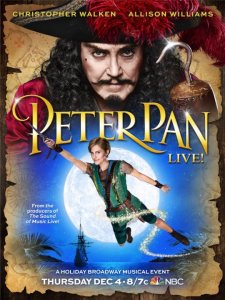 In defense of those rather cardboard proceedings, featuring an underwhelmingly wooden (see what  I did there? 🙂 ) performance from the otherwise charming, sweet, golden-voiced Ms. Underwood, I wrote, “Bully to NBC and the production team and the cast for their accomplishment and for giving the Wal-Mart generation a glimpse of another era. … Let’s hope for more live theatre on network TV … and less Wal-Mart.”

After finally slogging through Peter Pan Live! via the wonders of DVR, can I rescind that wish?

And good googly wooglies but as much as I hated the ever-increasingly invasive Wal-Mart ads, the show was worse. Others seem to disagree, but I found this production flatter, duller, drearier, and more aggravating than last year’s. Perhaps I gave Underwood and company a pass because it was the first time in decades someone had attempted such a spectacle. Perhaps Rodgers & Hammerstein’s Sound of Music is just a stronger show in its bones than Jule Styne/Adolph Green/Betty Comden’s Peter Pan. Perhaps Sound of Music had a stronger supporting cast, capable performers like Audra McDonald and Laura Benanti who knew how to transcend the molasses and pop off the screen with sparkle and charm. Perhaps all of the above.

Petuh, Petuh, Petuh…Christopher Walken as Hook channeled Bette Davis?  Kelli O’Hara as Mrs. Darling could have played Petuh or Wendy.  Wendy girl [Taylor Louderman] was great but looked 47.  Nana dog was the best of all.  Show was about as LIVE as a corpse in a casket.

The costumes? (Kelli alone even got that right)  Petuh Pan girl should have worn tights and elf shoes/hiking boots exposing a hint of waxed legs…And, with their outrageous costumery for Tiger Lily’s men and sometimes the pirates, why not give Petuh a pointy hat?!?

And Allison Williams as Petuh never left girldom.  Was this a fever dream about some very odd female rite of passage? Just exchange thimbles either with other girls or with castrated fun-loving immature boys whom they will mother, rather than ever … you know what?

And I kept thinking of Natalie Wood for some reason?  What would she have thought of Walken on a boat with BTW the most talented folks in the show?  Had been looking forward to the production and kept thinking –through all of the lengthy commercial breaks (breaks causing ADD) filled with materialistic mind sets from big families who could even maybe adopt lost boys–that it would improve?

And how about this suggestion.  When Minnie Driver pushed the show down for a completed drowning death that the windows might have opened and Allison’s dad, newscaster Brian Williams, himself flew in?  His man daughter with the waxed legs all grown up?  And did they write unmemorable new-stale songs for this thing or what?

My mom is spot on.

As I watched this thing in dribs and drabs over the past weekend – 30 minutes here, 30 minutes there – I grew more horrified with each installment. Was Walken being punished somehow? Or were we, the audience? He seemed miserable, tone-deaf, and medicated like an aging drag queen who’d put in one too many performances of “I Will Survive” at The Jolly Roger in Provincetown. And the dancing? His much-vaunted dancing? All I saw was a lot of leaning left and right, fay hand gestures, and an occasional pretend tap sequence or too. Is that latter bit called lip-syncing? Toe-syncing?

Williams is arguably a smidgen better actor than Underwood but she definitely doesn’t have the erstwhile Maria’s pipes or, for that matter, simple sweetness. Williams had all the pluck and charm of a ball point pen and, at times, she performed like a well-heeled, smart-alecky co-ed slumming on her winter break from Barnard.

Christian Borle as Mr. Darling/Smee was ok. I find him talented but one-note usually. I may be in the minority, but I thought this production highlighted all of his airless, stiff limitations. O’Hara, on the other hand, was magic. In this production, she reined in her overly plucky twinkle, and gave us a Mrs. Darling who was warm, authentic, poignant, and haunting. I very much like what she did with the role. It was a sobering juxtaposition to everything else.

Ah, everything else. The ingeniously fluid set design employed during Sound of Music was definitely on display, but a bigger budget does not necessarily bring better taste or strategic restraint. Neverland looked like it was outfitted by Hot Topic and Justice store employees hopped up on acid and Diet Coke. The Lost Boys/Pirates/Natives (basically all the group numbers) were a hoot to watch – that’s generally when the show came alive, especially the Pirates … but they all appeared to have been costumed by cast-off pieces from The Village People’s camp classic (?) Can’t Stop the Music (directed by Nancy Walker, btw/wtf).

It was this jarring conflict of tone and energy and intent that was most problematic. As my mom suggests with her “pointy hat” remark, if the show had just gone for all-out crazy the way the set and costume design suggest, it would have been an absolute riot. Peter Pan is a strange children’s (?) book with a lot of bizarre Freudian subtext (and super-text) made even odder when musicalized with a grown woman playing the lead and a cast of grown men all in pursuit of and at odds over finding the perfect mother (seemingly the show’s primary narrative conceit).

The production designers seemed to get that innate oddness, but, apparently, they were attending different team meetings from the director and cast who approached the material with flat affect and somber tone … when they could remember their lines, that is. The only way this thing would have worked (in addition to excising an hour of material/advertisements) would have been to celebrate its peculiarity, not only in production values but in performance. We needed unhinged whimsy but got unhinged boredom.

14 thoughts on “A day late and a dollar short: NBC’s Peter Pan Live!”