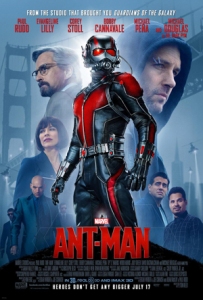 So, for us comic book nerds, the fact that an “Ant-Man” film even exists is a remarkable achievement. If you’d asked me at age 11 – the absolute peak of my superhero, four-color mania – whether I could envision a day when a character this seemingly obscure to mainstream America would one day get the big budget blockbuster treatment by no less than the Walt Disney Company (by way of Marvel Studios), I would have passed out in a fit of hyperventilating giggles.

Well, geeks do grow up. And make movies, apparently.

So how does Ant-Man, Marvel Studios’ latest cinematic installment (number 12 in the official “Marvel Cinematic Universe” which began with Iron Man), fare with this now-middle-aged, possibly-more-jaded, arguably-cape-and-spandex-fatigued comic fanatic?

So, said with less pretension, I (more or less) dug it.

The film began life in the hands of celluloid anarchist Edgar Wright (Shaun of the Dead, Hot Fuzz) who eventually walked away from the picture, no doubt when the oppressive merchandising hounds at Disney likely felt things were getting too gleefully weird. In stepped director Peyton Reed (Bring It On, Down with Love – wtf?!?) and screenwriter Adam McKay (Anchorman, Talladega Nights) to bring the film to completion.

Strangely, what we all predicted would be a stylistic train-wreck works better than it should. The bro culture of McKay, the TV-movie pacing of Reed, and the middle-finger-to-the-sky of Wright have yielded the Reese’s Peanut Butter Cup of superhero films: a little salty, a little sweet, utterly predictable, and pleasantly forgettable.

For the uninitiated, Ant-Man is a character from the early days of Marvel Comics, and his claim to fame (other than being one of the founding members of The Avengers) is that he can shrink to microscopic size and command an army of friendly ants to do his bidding. Now if that isn’t a natural fit for a multi-million-dollar motion picture, what is?

The film is less save-the-planet-from-obliteration (though no film in the genre can totally escape that cliched trope) as it is bonkers heist film. Rudd’s Scott Lang, recently released from prison on a burglary conviction, falls back into old (bad) habits in the hopes of catching up on child-support payments for his estranged daughter. Lang’s ex-wife, portrayed by Judy Greer (again, criminally underused in a big budget tent-pole), is playing house with a cop (Bobby Cannavale – why is this ham still cast in anything?), and Lang takes up with his old gang of misfit toys (led by a preciously addled Michael Pena) to try to set things right.

Eventually, their hijinks lead them to scientist Henry Pym (Michael Douglas being all Michael Douglas-y … boring) and his daughter Hope (a luminous – but tragically bewigged – Evangeline Lilly). Y’see, back in the day, Pym invented the Ant-Man suit to fight big, bad Russkies in the Cold War (or something); Lang steals the suit to make a quick buck (’cause Pym secretly wants him to … of course); and then they all set out together to defeat the real big bad Darren Cross (Corey Stoll, all meaty, glistening sleaze), Pym’s former protege who has taken over Pym’s company and wants to make teeny tiny super soldiers to take over the world.

Good googly wooglies, that is a convoluted plot to try to synopsize. Definitely a script written by a schizophrenically focus-grouped committee.

Regardless, there is more goodhearted fun in any five minutes of Ant-Man than in the entire bloated excess of Avengers: Age of Ultron (a film, by the way, which I didn’t hate … but I don’t remember liking very much three months later either). Ant-Man‘s cast (with the exception of Douglas who just comes off stiff and constipated) is all loose-limbed fun, reveling in a succession of tart and tasty character moments and never taking one damn bit of it too seriously.

The film ends with a Tex Avery high-wire-act of a fight sequence, mining all the comic tension possible from having a hero (and antagonist) who can hide among carpet fibers. You will never look at Thomas the Tank Engine the same way ever again. I only wish the filmmakers (any and all of them) had been so creative, so brave for the entirety of the film. Maybe the next set of Marvel Studio focus groups can offer that feedback for the inevitable sequel(s).