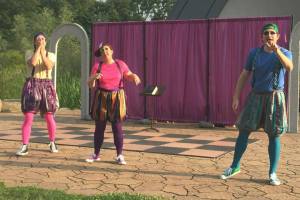 Penny Seats Theatre Company ends its successful run of The Complete Works of William Shakespeare [Abridged] this weekend July 23, 24, and 25 at 7:00pm. This hilarious parody features three actors attempting valiantly to perform every Shakespearean work in a mere 90 minutes.

It was first performed by its authors, Adam Long, Daniel Singer, and Jess Winfield, at the Edinburgh Festival Fringe in 1987, and it has gained meteoric fame in the years since, becoming one of the world’s most popular shows. The actors move frantically from piece to piece, donning and doffing costumes and wigs, hurling well-timed insults at one another, and frequently interacting with the audience.

The show stars Matt Cameron, Artun Kircali, and Leanne Young, and is directed by Anne Levy.  Advance tickets are available for $10 at www.pennyseats.org, or at (734) 926-5346. They will also be available at the door. 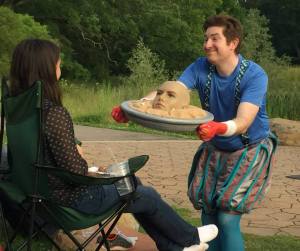 Set in an admittedly absurd dystopian future where one must pay to pee, the show lampoons corporate bureaucracy, pie-in-the-sky optimism, revolution without a plan, and the musical theatre genre itself. With a full pit orchestra (led by Richard Alder) on the band shell stage, the action takes place around the audience in the park.

Sarah Ann Leahy as Barrel and Roy Sexton (ME!) as Lockstock

Advance tickets are available at the group’s website, www.pennyseats.org. For the first time this year, the group is also selling package tickets, where patrons can purchase tickets to both shows and save a dollar per ticket. Although the curtain goes up at 7:00pm each evening, pre-show picnicking is encouraged, and the group will sell water and concessions at the park as well.

All performances will be at the West Park band shell.  Patrons are encouraged to bring a picnic dinner to enjoy at the park before or during the show.  Lawn chairs, hats, bug spray, and other outdoor gear are also encouraged. Alcohol may also be brought and enjoyed responsibly.  Water and concessions will be available for purchase. More information about tickets, parking, and available packages, is available on the company’s website, www.pennyseats.org.