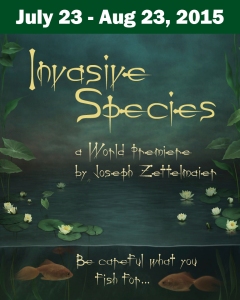 I’m certain it breaks some unspoken critics’ oath to review a show featuring one of your dearest friends, so don’t consider this a review of Tipping Point Theatre’s world premiere Invasive Species, starring Aral Gribble (whom I don’t know) and Melynee Saunders Warren (whom I most assuredly know and with whom I may or may not have shared a stage … or two).

But this play is so good that I have to write something.

Joseph Zettelmaier’s intimately inventive script, making its debut here in Michigan, details the misadventures of a lonely widower schlub Earl Hobbs (Gribble) whose life is transformed when he discovers an exotic creature in his favorite fishing hole and takes said specimen (soon dubbed “Toothy”) home as a confidante and pet. Warren portrays a well-intentioned DNR officer Eden Selkirk, plagued by her own personal tragedies, who ends up (spoiler alert!) aiding and abetting Hobbs in his efforts to keep Toothy alive and thriving.

A theatrical pas de deux like Invasive Species is no easy task, and, under the sure-handed direction of Joseph Albright, Gribble and Warren keep the laughs (and the poignancy) flowing in the show’s crisp 90-minute running time. “Life in an aquarium” is a recurring theme in the production as both Hobbs and Selkirk find themselves drawn together by the confines of small-town, small-state, small-life. The smart set design by Jennifer Maiseloff and lighting design by Alex Gay ably assist the cast in this endeavor, providing them a beautifully insular series of indoor/outdoor levels with which to play. The efficient use of space is as breathtaking as it is lean, mean, and, well, perfect.

The script, perhaps at times a bit too rapturous about rural Michigan’s charms (particularly in its closing monologues), is incisive and deeply affecting. Zettelmaier has a keen insight into heartache and loneliness, but never for one moment devolves into cloying condescension. Hobbs and Selkirk are broken souls seeking kinship from nature and from each other, and their painfully heartwarming collision is as moving as it is horrifying.

The animal lover in me appreciated the central  metaphor in Hobbs’ adoption of the contraband Toothy: sometimes the unlikeliest friends can unlock our shattered psyches. And the delicate acting work of Gribble and Warren is a charming wonder, their deeply human connection transformative and empathic, showing how the rigidity of rules and regulations can melt away to compassion and understanding. This show is a gem, and runs through August 23 – don’t miss it: http://www.tippingpointtheatre.com/