Let this be a lesson to comic book nerds everywhere: don’t buy tickets to some superhero extravaganza 18 months in advance on the promise of a state-of-the-art immersive experience in the four-color world of funny book lore. 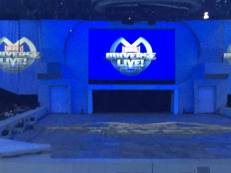 ‘Cause a year and a half later, that magical cape-and-spandex fever dream to be? It’s basically Spider-Man Ice Capades … without the ice.

That about sums up the arena-touring Marvel Universe Live! which we had the misfortune of taking in this afternoon at The Palace of Auburn Hills, alongside a lot of gobsmacked kids and their grimacing mothers and fathers.

Seriously, if we escape this experience unscathed from the stomach flu or an ear infection, it will be a minor miracle.

The show runs under two hours, including an interminable 25 minute intermission, designed chiefly for parents to empty their wallets at the carny-esque merchandise carts clogging nearly every aisle. It is a Disney enterprise after all.

The plot, or what passes for one, is a hodgepodge of elements cribbed from a decade’s worth of Marvel movies (Avengers, Iron Man, Captain America, Thor) and a bit or two from the comics (those characters like X-Men or Spider-Man for whom Disney doesn’t necessarily hold the movie rights in Mickey’s four-fingered paw).

The Avengers, or a loose confederation of badly costumed heroes bearing a passing resemblance to said superhero team, are chasing down bits of that damned Tesseract (“Cosmic Cube”) – the boring MacGuffin that has dominated Disney/Marvel’s film output: a glowing device that gets chopped up in a million bits which, if brought back together, will let any number of bad-deed-doers take over the world, monologue an lot, and shake their scaly fists at the sky.

The show is an enterprise intended for kids, so I should just stop being a jackass and note that, for any child under 10, it will be the. best. freaking. thing. they. have. ever. seen. (I was heartened to see as many girls as boys in the audience, possibly indicating a break in the Disney Princess stranglehold on post-millennial prepubescent gender identity? We can only hope.)

There are motorcycle and aerial stunts aplenty with enough pyrotechnics to make a vintage Van Halen fan weep. The dialogue (the program actually lists a team of writers on this thing, and surprisingly not 18 monkeys in a room of keyboards) is phoned in from somewhere left of the moon, as the poor souls playing these comic book icons are required to lip sync every line. And I thought Britney Spears had it bad … and that ain’t good. 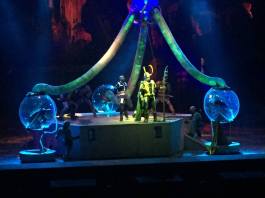 Loki and his vacuum/fish bowls of death

The costumes are pretty hit or miss. Some folks, like big bad Asgardian Loki, are almost note-perfect, while others, like Wolverine, look like they were garbed in leftovers fished from the remainder bin at Halloween City.

Believe it or not, the show has its standout performers (though for all intents and purposes, the actors remain nameless/faceless entities).

Spider-Man is a hoot, assigned the zippiest quips (not saying much) and imbued with an acrobatic whimsy that comes as a welcome relief from all the paper-doll posturing on-stage. Captain America is a delight as well, with some great stunt work and a bit of the light comedy his eponymous films wring from Cap’s anachronistic circumstances. 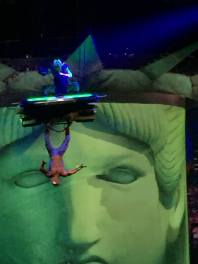 Spider-Man hitching a ride from his buddy Green Goblin

For the true comic nerds in audience? For middle-aged people, like yours truly, who have no business going to a show like this, at least without the cover-story of dragging a niece or nephew or random neighbor kid grudgingly along?

Well, for geeks like us, the joys are limited. You get to see some random fan-favorite characters like Captain Marvel, Black Cat, assorted AIM Agents (with those silly beekeeper outfits), and Madame Hydra in the flesh, and there are some nifty items in the merchandise booth (the program with commemorative comic book and a few of the shirts are keepers). Otherwise, just stay home, save your moolah, and revisit your old super-favorites the way we always have … by reading.

12 thoughts on “Let this be a lesson to comic book nerds everywhere: Marvel Universe Live! at the Palace of Auburn Hills”