From our press release … which is why I refer to myself in the third person on my own blog … or I’m just having a nervous breakdown. Or both.

Ann Arbor’s Penny Seats Theatre Company is set to open its sixth summer season at West Park, performing outdoor professional theatre at movie-ticket prices, on Thursdays, Fridays, and Saturdays throughout June and July. This year, the group’s season will open with a modern adaption of Chaucer’s The Canterbury Tales (by Lindsay Price), followed by the 2007 Broadway musical smash, Xanadu (based on the 1980 cult classic movie of the same name), with a book by Douglas Carter Beane and music and lyrics by Jeff Lynne and John Farrar.

Canterbury Tales, directed by Anne Levy (Brighton), is set to star Matt Cameron (South Lyon), Dale Dobson (Milford), Jenna Hinton (Farmington Hills), Jeff Miller (Ann Arbor), Tina Paraventi (Ypsilanti), Debbie Secord (Ypsilanti), Jeff Stringer (Ann Arbor), and Jennifer Sulkowski (Plymouth). Tina Paraventi, who plays the show’s holier-than-thou Prioress, expressed great excitement about this new adaptation: “This is a wonderful adaptation of Chaucer’s Middle-English collection of stories, accessible to today’s audiences, very high-energy and entertaining. It’s also great fun for the actors, who not only play the travelers, but also act out different roles in the stories told by each traveler.” Debbie Secord (who plays the devilish Wife of Bath) agreed: “This cast and crew are phenomenal and I can’t wait to see what we can accomplish with this show. I must say, I am particularly fond of the host of characters I will be playing in the show, most notably the Wife of Bath and the chicken—ahem—hen, Pertelote. I must say, I’ve never played poultry before and am looking forward to it!”

This hilarious, energetic show will run at West Park, in the band shell area, from June 16th to July 2nd at 7:00pm on Thursdays, Fridays, and Saturdays. 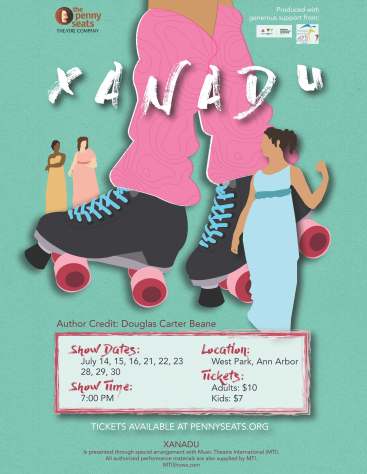 Next up is the 2007 Tony nominated musical comedy, Xanadu. It tells the tale of a Greek Muse’s decent from Mt. Olympus to Venice Beach, California, to inspire a struggling artist to achieve the greatest artistic creation of all time – the world’s first roller disco. And yes, there will be roller skating in the park!

Roy Sexton, who plays Danny Maguire, the show’s curmudgeonly businessman, summed up the feelings of many in the cast about Xanadu‘s quirky place in the musical theatre cannon: “I’ve loved Xanadu since I first viewed it – about a million times – on HBO in the early 80s. I wore out two copies of the ELO/Olivia Newton-John/Gene Kelly soundtrack, but I always lived in shame because the film was such a notorious Hollywood bomb. When it was revived and reinvented so successfully on Broadway, I secretly (well, not so secretly) hoped the Penny Seats would eventually take on this campy, kitschy, satirical stage re-do of the movie. The score is crackerjack and the narrative is just so hysterically loopy that I knew it would be a great fit for us. I live in shame no more!”

Xanadu will run at West Park’s band shell from July 14th to July 30th at 7:00pm on Thursdays, Fridays, and Saturdays.

Advance tickets to both shows are available at the group’s website, www.pennyseats.org.  Although the curtain goes up at 7:00pm each evening, pre-show picnicking is encouraged for audience members, and the group will sell water and concessions at the park as well.

ABOUT THE PENNY SEATS: Founded in 2010, we’re performers and players, minimalists and penny-pinchers.  We think theatre should be fun and stirring, not stuffy or repetitive.  We believe going to a show should not break the bank.  And we find Michigan summer evenings beautiful. Thus, we produce dramas and comedies, musicals and original adaptations, classics and works by up-and-coming playwrights.  And you can see any of our shows for the same price as a movie ticket.

FOR MORE INFORMATION about The Penny Seats call 734-926-5346 or Visit: www.pennyseats.org.

Reel Roy Reviews is now TWO books! You can purchase your copies by clicking here (print and digital). In addition to online ordering at Amazon or from the publisher Open Books, the first book is currently is being carried by Bookbound, Common Language Bookstore, and Crazy Wisdom Bookstore and Tea Room in Ann Arbor, Michigan and by Green Brain Comics in Dearborn, Michigan.  My mom Susie Duncan Sexton’s Secrets of an Old Typewriter series is also available on Amazon and at Bookbound and Common Language. 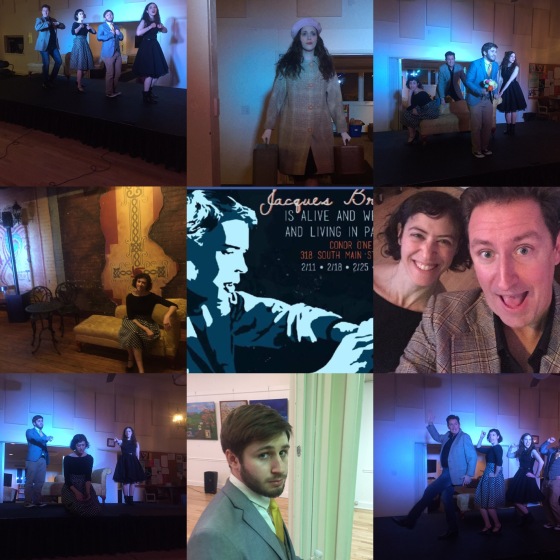