Is it fashionable to hate Mamma Mia!, the international ABBA-stage musical sensation that was parlayed into the biggest box office film-musical of all time ten (!) years ago, starring Meryl Streep? Seems that way. Maybe it’s misogyny or sour grapes or a general critical agnosticism toward anything big, silly, and fun. Maybe people don’t want to admit how much they love infectious Swedish pop songs with nonsensical titles and lyrical metaphors that appear to have been crafted by a roomful of monkeys with typewriters.

Whatever. I liked it. Mostly.

Well, let me equivocate. I appreciated the gaga joy that the original film’s cast seemed to be having – a group of award-winning pros (Streep, Christine Baranski, Julie Walters, Amanda Seyfried, Dominic Cooper, Colin Firth, Pierce Brosnan, Stellan Skarsgard) who didn’t give a flying fig that they were working from a junk script with a cringe-worthy concept (who’s your daddy?). These talented souls could read an appliance repair manual aloud and make it seem zippy. So what happens when you offer them some catchy-as-eff songs and throw them on a plastic back-lot set designed by Olive Garden with a sound-stage-blue sky that makes your heart ache? Cinematic genius.

Franchise newcomer (is this a franchise yet?) Ol Parker takes over direction from Phyllida Lloyd on the nobody-asked-for-it sequel Mamma Mia! Here We Go Again. He does some spectacular reverse engineering to give us an actual film that is just as loopy as before but, you know, gives us characters and motivation and something resembling a plot (sort of).

Since this second entry is basically a greatest hits of a greatest hits package, some songs from the prior film get repeated; some B-side deep cuts you never knew existed (nor wanted to) are employed; and, as a score, all of the numbers are more seamlessly integrated into the story line … which is basically TWO storylines.

First, Sophie (a luminous Seyfried) is (spoiler alert!) mourning the passing of her mother Donna (Streep, who adds to her odd gallery of beyond-the-grave “angel” characters here), and re-opens the picturesque Greek hotel as a tribute.

Second, in parallel, we learn through flashbacks how young Donna found her island retreat, slept with three different dudes in rapid succession (Jeremy Irvine, Hugh Skinner, Josh Dylan – all Abercrombie & Fitch adorable and completely disposably interchangeable), and subsequently declared, “To hell with all of ya!”

A crackerjack Lily James (Cinderella, Baby Driver) portrays young Donna. She effortlessly channels and brilliantly reinvents the madcap essence of Streep … despite the fact that the two don’t look one whit alike. Lily is brilliant in the role – unapologetic and fiery. By far, the smartest thing the filmmakers did was casting her. She makes the film. Jessica Keenan Wynn and Alexa Davies are a hoot as her pals (the younger versions of Baranski and Walters, respectively), and the trio present a compelling and believable dynamic as pals making their way in a world and era (1979) where their free-spirited agency ain’t exactly celebrated. (The more things change…)

In the present day, we also see the addition of a criminally underutilized Andy Garcia as the hotel’s concierge/handyman ridiculously named, yes, Fernando. He seems to exist primarily as a narrative device for Cher who literally helicopters in for the last twenty minutes of the movie, phoning in an absolutely brilliant approximation of Cher at her Cher-iest, to croon one of ABBA’s most beloved tunes.

For some illogical reason, Cher, who is only three years older than Streep, plays Streep’s mother. She is about as believable (pun intended) playing Streep’s mother as I would be. Hell, I’d be more believable. “Do you belieeeeeve, in life after love … love … love?” But who cares? In the Teflon-coated Mamma Mia universe, all things exist in servitude to hedonistic joy. And you don’t get more hedonistic nor more joyous than Cher singing “Fernando,” as exquisitely escapist as a big movie moment can be. I adored the sequence and hated myself for doing so the next day. 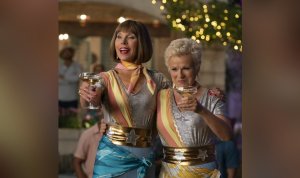 Check your brain at the door, drink in the images and sounds, and enjoy the best party of the summer with Mamma Mia! Here We Go Again. Yes, I laughed, I sang, I danced, I cried, and I’m not ashamed to admit that. Much.

There were four lines in the film that I jotted down as potential review titles. They are indicative of why this film is such simplistic, absurdist genius in our meme-happy culture. I chose one – spoken by Julie Walters (I think) – which seemed to perfectly reflect the position this sequel takes in relation to its most vocal critics: “It’s called karma, and it’s spelled ‘ha’!” For the curious? The other three options were as follows: “Be still my beating vagina.” “It’s not easy being a mother. If it was, fathers would do it.” AND “I judge a person’s heart by the way they treat animals.” Go see the film, have a ball, and tell me if I chose my title … poorly.