I’m not a fan of extraneous sequels to sweetly self-contained high-concept comedies. I loathe cash-grab second or third chapters to the kind of original, fresh, humanistic sleeper hits which dumbfound Hollywood execs who believe the only way to climb the corporate ladder is by churning out one superhero opus after another. Often, the follow-up overemphasizes any buzzy kitsch that defined the first film and buries any shaggy underdog appeal in a mountain of glib slapstick and opportunistic product placement.

To me, Pitch Perfect 2 was, ahem, a perfect example of this commercial phenomenon, taking Rebel Wilson’s free-spirited second-banana “Fat Amy” and turning her into the unfunny, overexposed Mater (see Pixar’s Cars 2 … no don’t) of a cappella singing franchises. Poor Anna Kendrick (Into the Woods, Mike and Dave Need Wedding Dates), normally a luminous scene-stealer in any film, didn’t stand a chance.

I’m happy to report that Pitch Perfect 3, while still utterly unnecessary, is a fabulous course correction to the enterprise, featuring the sweet harmonies and girl-power shenanigans of the now graduated-from-college “Barden Bellas” in all their goofy show choir glory. 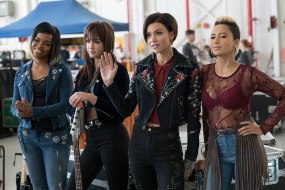 Directed by series-newcomer Trish Sie and written by Kay Cannon and Mike White, the threequel takes us on a European road trip as the Bellas, generally dissatisfied with the let-down of workaday adult life, stage one last hurrah, joining a USO tour alongside a surly power-pop-punk quartet (led by delightfully arch mean girl Ruby Rose), a Li’l John-adjacent rap act, and a mullet-wearing bluegrass jug band. What could have been a cliched let-down (European road-trip … really?) ends up a zingy meringue (albeit still pretty cliched) in the capable hands of the film’s solid cast. 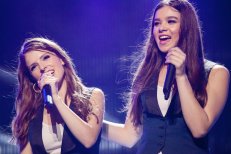 The vocals, as ever, are impeccable and guilty fun, as the Bellas aca-remix one overplayed pop radio ditty after another. The ensemble is populated with pros (Anna Camp, Hairspray‘s Brittany Snow, True Grit/Edge of Seventeen‘s Hailee Steinfeld, Hana Mae Lee, Ester Dean, Chrissie Fit, Alexis Knapp) who know how to spin sitcom stereotypes into compelling and relatable human beings.

Blessedly, Kendrick is again in the driver’s seat narratively. The film reorients the series-focus back to her Beca character, still exhibiting outsize talent in a mediocre world that doesn’t know what to do with a whip-smart woman who isn’t particularly interested in playing reindeer games.

Yes, series regulars Elizabeth Banks and John Michael Higgins also return as caustic a cappella competition commentators who seem to have landed in the Pitch Perfect films on their way to a Christopher Guest satire (e.g. Best-in-Show, A Mighty Wind). When asked by Kendrick where they came from when the duo materializes from thin air on an Air Force tarmac, Banks deadpans, “A little town called persistence.” They are a total hoot, even if they do appear to be in an entirely different film from everyone else.

There is a jarringly odd subplot involving Daddy’s Home 2‘s John Lithgow (must he be in every movie this holiday season?) as Fat Amy’s sleazy Eurotrash high-stakes criminal father, and it’s a testament to the film and to Lithgow and Wilson that their rapport works as well as it does. The subplot seems tonally out-of-place with the rest of the proceedings, but it does give rise to a truly killer aca-cover of Britney Spears’ “Toxic” by the Bellas. The number runs twice in the film, and it is so sharply executed that it could have appeared a third time and not overstayed its welcome.

Pitch Perfect 3 is a holiday trifle but a welcome one as it marries genuine wit and heart with a celebration of friendship and song and female agency that is always needed onscreen. A fourth entry in the series seems inevitable, and I won’t complain (much). The easy, warm, and inclusive dynamic of this cast is one I will gladly leave on repeat.

From my wonderful publisher Open Books…

Just 5 days remain until the official launch of ReelRoyReviews, a book of film, music, and theatre reviews, by Roy Sexton!

Please note that, in addition to online ordering, the book currently is being carried by Green Brain Comics in Dearborn, Michigan and by Memory Lane Gift Shop in Columbia City, Indiana. Memory Lane also has copies of Susie Duncan Sexton’s Secrets of an Old Typewriter series.

Here’s a snippet from Roy’s Review of Inside Llewyn Davis: “I’ll tell you what I think. Inside Llewyn Davis is in keeping with a theme that shoots through much of the Coen Brothers work: frustration over the venom creative people spew at each other in their dogged competition for limited resources, attention, and fame. Actors and singers and writers and painters and dancers are all a bit broken, and they make their way into careers that are often doomed from the start, compounded by a cruelly competitive system that rewards the schemers and abandons the weak.”

Learn more about REEL ROY REVIEWS, VOL 1: KEEPIN’ IT REAL by Roy Sexton at http://www.open-bks.com/library/moderns/reel-roy-reviews/about-book.html. Book can also be ordered at Amazon here. 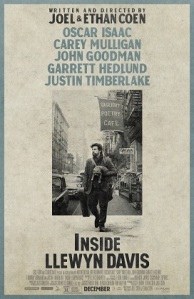 I have to start with a disclaimer …

I cannot tolerate a movie where animals are hurt or in peril. I knew going into Inside Llewyn Davis, the latest from the acerbic yet cynically humanistic writer/director team Joel and Ethan Coen, that a runaway cat is a central narrative element. Hell, the orange tabby is on the damn poster, clutched in the titular anti-hero’s arms as Llewyn saunters down a busy New York street.

Have you ever tried to hold a cat in one arm, a guitar in the other, while walking down a bustling thoroughfare?!? Exactly.

I will offer for my fellow animal advocates (spoiler alert!) that the cat is ok. Sort of.

A cat runs out a fire escape window and disappears. A cat reappears. A cat makes it home. A cat takes a road trip to Chicago. And a cat (or something) has a limp-inducing near miss with a car on a snowy road. Might be the same cat. Might not. I’m not sure what all these orange cats signify, but the Coen Brothers love their oddball metaphors, even if PETA (or yours truly) is inflamed in the process.

(As a side note, for viewers like me who, yes … of course! … worry about cinematic animal safety much more than that of human counterparts, there is a website for us. Thanks to Kim Elizabeth Johnson for alerting me to it.)

So, with that point made, how is the movie? Quite good actually. It is one of the Coens’ most sedate offerings, bleakly transporting viewers to grungy Greenwich Village in the 1960s where the folk music scene appears to be atrophying before the ascent of pop derivatives like Bob Dylan and his ilk.

Llewyn, played wonderfully by Oscar Isaac, is a failed troubadour, whose singing partner is long gone and who subsists on a steady diet of cigarettes, self-loathing, and couch-crashing at a succession of annoyed friends’ apartments. Isaac is a marvel, resisting every urge to make Llewyn one bit redeeming or likable. He is a wretched human (with a lovely voice) consumed by a toxic brew of pretension, insecurity, jealousy, bitterness, condescension, and holier than thou artsy-fartsiness.

(Oh, how I’ve known too many dudes like this fellow – folks who are so got by their own disappointments that they have to kick sand in the faces of any and everyone else with the tiniest shred of talent or even the slightest bit of creative happiness. Ah, that felt better.)

Often with a Coen Brothers film (in fact their best ones – like Barton Fink or the Oscar-winning No Country for Old Men), you’re left wondering: what was their intention exactly? This film, like others in their oeuvre, offers their trademark circular non-ending ending, and, as we departed the theatre, I overheard a few folks asking, “What was that about?”

I’ll tell you what I think. Inside Llewyn Davis is in keeping with a theme that shoots through much of the Coen Brothers work: frustration over the venom creative people spew at each other in their dogged competition for limited resources, attention, and fame. Actors and singers and writers and painters and dancers are all a bit broken, and they make their way into careers that are often doomed from the start, compounded by a cruelly competitive system that rewards the schemers and abandons the weak.

With this acidic lens, the Coens turn their filmic gaze on folk music, one of the more self-satisfied forms of artistic expression. At surface, folk music has always been about gathering the tribe to celebrate our commonality; yet, in reality, it is usually a vehicle for some twee turtleneck-wearing phony to look down his or her nose at middle-class plebes who are scraping by with their staid corporate lives and suffocating mortgage payments.

The Coens dive right into the heart of that notion, and not with the campy satire of Christopher Guest’s similarly themed A Mighty Wind, but with the unsympathetic bruised heart of a Sidney Lumet or a John Cassavetes with just a smidge of their own asburdist twinkle.

The supporting cast is populated with assorted odd ducks stepping on the heads of their fellow “artists” in hopes of making a buck or two. Justin Timberlake is adequate in a throwaway role as an earnest folkie who writes a really godawful song with unsurprising populist appeal. John Goodman is sheer brilliance as a mean-as-a-rattlesnake jazz musician who shows his contempt for Llewyn and his chosen genre with a steady stream of vitriol, leveled at what he deems inane and amateurish musicianship. The normally exquisite Carey Mulligan struggles a bit with a one-note role (and equally bad wig) as an ambitious ladder-climbing folkie who may or may not be pregnant with Llewyn’s child.

Previously mentioned feline concerns aside, I recommend Inside Llewyn Davis to anyone who has found themselves lost in a creative bubble, not sure whom to trust or where to go. As they say, karma will get you, and perhaps that is the ultimate lesson we glean from Llewyn’s neglect of cats and people. What goes around comes around. And folk music is hateful stuff.