(Taken together, all might as well be explaining the current state of world politics.)

I found Disney’s live action reimagining of Aladdin pretty delightful and a welcome, inclusive, and, dare I say, much-needed feminist update of the original. (Note: I liked this spring’s equally critically reviled Dumbo a LOT too, so fair warning.)

Yes, we all adored Robin Williams, but we forget that he is (arguably) the essential (sole?) reason the original animated film is held in such esteem. I think director Guy Ritchie (Sherlock Holmes) rebalances the proceedings with a well-rounded and integrated effort in his live action remake. Does it occasionally suffer from some TV movie flatness (a la Disney’s own Once Upon a Time or The Descendants)? Maybe. Do the musical numbers look a bit like they were lifted from a 1980s cruise ship commercial? Probably. But on the whole, I thought it was a lot of fun. And don’t get me wrong. I was nuts about the original and saw it about five times in the cinema during my sophomore year of … college. So, yes, I’m a soft touch for this material, and also one who has a well-earned fondness for the original. 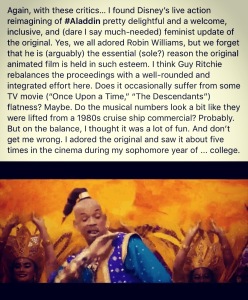 Disney’s storied 90s animated output was, on balance, comprised of big Broadway-esque musicals that made it ok for a sh*t-ton of Gen Xers and Millennials to like show tunes, fairy tales, AND cartoons again. The flicks earned oodles of money in process. Nowadays, since just about any movie can be viewed (legally or illegally) on an iPad via YouTube, the idea of Disney “re-releasing” the “classics” from the “vault” via DVD/VHS/carrier pigeon is a quaint memory. Consequently, the Mouse House has to find a new way to monetize their intellectual property for the children of the children of the children of all their original audiences. Hence, remade enterprises like the recent live action Dumbo, the upcoming Lion King, and this Aladdin.

Folks, it’s Disney. If they can wring a nickel out of a t-shirt or doll or knapsack featuring some obscure character from, say, The Aristocats, they sure as hell are going to get another billion dollars from one of their most popular animated flicks of all time: Aladdin.

The nice thing here is that Aladdin is actually pretty good, a pleasant early summer diversion, that leans into Will Smith’s estimable charms while putting a governor on his out-sized ego and that offers us a forward-thinking story line about people of color living as, you know, people and acquitting themselves with agency and wit and heart.

Even villainous Jafar gets a makeover here. Describing the original animated version of Jafar as ethnic caricature would be … kind. In the hands of Marwan Kenzari, Jafar is still pretty despicable, but with a motivation that is more political than icky-for-icky’s sake and who isn’t as creepily fixated on marrying the unwilling Jasmine. The downside is live-action Jafar is, well, a little bland, not-to-mention kinda pretty, so his menace ends up more subtle than overt. That said, it’s a stronger performance than I think many will initially recognize. (His sidekick parrot Iago is toned down too – nary a squawking voice of Gilbert Godfried in earshot.)

Our leads Mena Massoud and Naomi Scott as Aladdin and Jasmine respectively are, yes, Disney dreamy, but they also have grit and spark underlying all that glamor. Scott particularly approaches each scene with an unselfconscious irony and fiery whimsy that gives us a very un-princessy princess (blessed be). By the way, in this update, Jasmine is less interested in romance than in being named (rightfully) sultan. Yasss, queen!

Saturday Night Live‘s Nasim Pedrad is great fun as Jasmine’s confidante and handmaiden, the newly created character Dalia, who suffers no fools gladly either. When Scott steps forth to deliver the score’s one new song, the anthemic “Speechless” (crafted by original composer Alan Menken with an assist from The Greatest Showman‘s/La La Land‘s Benj Pasek and Justin Paul), a star is born, and the Disney princess merchandising machine gets a much-needed shot of #ImWithHer feminism:

In the end, though, Aladdin is still a rollicking fairy tale adventure, and Ritchie paces it as such. Musical numbers? Nah, not his forte, but he makes them work in an insular, oversaturated, Bollywood-lite sort-of-way. The marketplace shenanigans and palace intrigues, however, are all rock solid. Will Smith? Not a singer. But he can move and he lights up a screen like no other. (Robin Williams wasn’t exactly Pavarotti.) In Smith’s hands, the jazzy cut-up “Friend Like Me” gets a Fresh Prince hip-hop makeover, and it works far better than my description makes it sound. No one in the production is taking this material too damn seriously. Shakespeare, it ain’t. And that’s just fine.