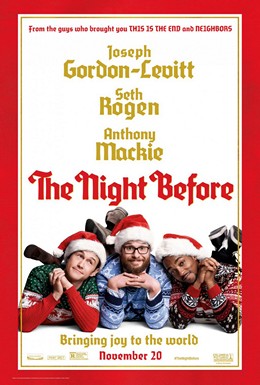 If we’re really honest with ourselves, Christmas is less about a magically mysterious birth, less about “new beginnings,” and more about exorcising the ghosts and specters of the past that haunt us all. Charles Dickens understood this, and that’s why A Christmas Carol, which is as gothic a horror story as they come, has become a timeless template for the best holiday stories in the canon.

Hollywood knows this too, and they return to Dickens’ inkwell time and again, for the best (and the worst) of their seasonal cinematic output: It’s a Wonderful Life, A Christmas Story, Home Alone, Four Christmases, A Very Harold and Kumar Christmas, The Polar Express, Love Actually, Scrooged (and every other overtly Dickensian swipe/homage/remake), Bad Santa (my favorite), and on and on. These films, in their episodic tedium, work when they nail the debilitating guilt we all feel as adults that the “special day” never lives up to its materialistic hype, that the whole month of December is cluttered and cramped – with decades of detritus from prior Decembers, with the tears of holiday heartbreak, with the thorny angst of broken promises, with too many ephemeral demands of time and money, and with the laughter of feverishly fun Christmas Eves nearly-forgotten.

The latest in a long line of sad/funny attempts to capture this cold, clammy Christmas truth is director Jonathan Levine’s (50/50, Warm Bodies) holiday farce The Night Before. The film depicts one final Christmas Eve rager for a trio of Manhattan-dwelling friends (Joseph Gordon-Levitt, Seth Rogen, and Anthony Mackie). The boys have convened for a night of drug-fueled debauchery every Noel for the past 15 years to help Gordon-Levitt’s character cope with the fact that his parents were killed in a car accident during the “hap-happiest season of alllll” in 2001.

However, people tend to move on, even if they don’t necessarily grow up, with Rogen and wife (the plucky Jillian Bell who nearly saves the film and steals every scene) expecting their first child and Mackie ascending as a football hero (albeit a steroidal one) and social media star. Gordon-Levitt, though, has no life, no prospects, and no joy, and these Christmas blow-outs have sustained him when he is otherwise running on fumes. In spite of this, Rogen and Mackie have convinced their buddy that this year’s event will be the last hurrah.

The film, which borrows liberally from The Hangover, The Great Gatsby (?!), and the aforementioned Scrooged and Harold and Kumar, unfortunately never gels around its high-concept premise. There are bright spots. Both Mackie (who can deftly balance poignancy and jackassery) and Gordon-Levitt (who has the sad clown deadpan expressiveness of silent movie king Harold Lloyd) have some fabulously grounded moments where the superficiality of the season halt them in their holly jolly tracks. They both deserved a better movie.

A stocking-full of zippy guest stars brighten the proceedings. Michael Shannon is a hoot as a bedraggled, philosophizing, drug-dealing guardian angel – think David Johansen’s Ghost of Christmas Past from Scrooged by way of It’s a Wonderful Life‘s Clarence Odbody … on his way to/from/to The Betty Ford Clinic. Mindy Kaling is her typical acerbic self, playing the boys’ drinking buddy and appearing to be the only character who has a realistic reaction to how, well, reprehensible they are. Lizzy Caplan is criminally underutilized as the wise and world-weary, gimlet-eyed object of Gordon-Levitt’s affections. And [spoiler alert] James Franco and Miley Cyrus (yup, there she is again) portray versions of themselves, injecting the right amount of spiked frothy eggnog into the film’s climactic party scene.

(Can someone get Franco and Cyrus a screwball comedy stat? Maybe a remake of Cary Grant/Katharine Hepburn’s Bringing Up Baby … set in a marijuana dispensary?)

Rogen is Rogen, and, since he is an executive producer on the film, it appears that no one was able to rein in his bug-eyed mugging and foghorn-in-a-windstorm delivery. I didn’t think it was possible, but he actually gets worse every time I see him, and he drags everyone down with him. The film has a sweet and salty balance when he’s not onscreen. Regrettably, he’s onscreen about 85% of the time, so you can do the math.

There is an interesting film – a loving/witty/sad/believable holiday movie gut-ache – lost somewhere amidst the rambling raunch and ribaldry of The Night Before. Perhaps that movie got left on the cutting room floor, or perhaps it was side-lined from the get-go with Rogen’s grubby involvement. I guess we’ll never know. I’m still waiting for that movie – in the meantime I’ll stick with Bad Santa.