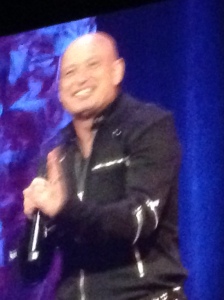 The other day over lunch with my pal Neil Simon (the consultant, not the playwright) I started to elaborate on a point I made earlier (apropos of nothing) on a blog entry about Gone With The Wind, namely that I love comedians who can mix bawdiness with self-deprecation, raunch with childlike whimsy, spiteful take-down with satiric absurdity. If a comedian is just mean or arrogant or gross for the sake of achieving some false sense of superiority over his or her audience, I ain’t havin’ it.

For me, Richard Pryor wins out every day over Eddie Murphy. Kathy Griffin or Joan Rivers get the prize over Lisa Lampanelli or Sarah Silverman. I’d rather spend an afternoon with Stephen Colbert, Lewis Black, or Whoopi Goldberg than Dane Cook, Kevin Hart, or Bill Maher (maybe). The list goes on.

(Maher may be the exception that proves the rule for me as his egomania, misogyny, and dyspepsia often serve as a brilliant counterpoint to the political zingers he is attempting to land…but he still gives me a headache.) 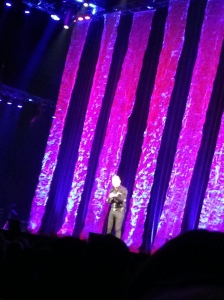 I’d never really given much thought to how I feel about Howie Mandel, though. Like Gallagher or Carrot Top, he made my junior high self laugh with abandon over the funny voices and the latex gloves on his head, the germaphobia and the OCD. I never watched St. Elsewhere – he may have been genius there. I just don’t know. I adored his charming children’s show Bobby’s World in the 90s, and it always amused me greatly that his helium-voiced alter ego also doubled as the vocalizations for Gizmo in Gremlins and Skeeter on Muppet Babies.

As I got older, Mandel just seemed to disappear into the margins. I may have unfairly lumped him into the buffoonish band of novelty comics, or maybe he just became complacent, hosting game shows (Deal or No Deal) and talent contests (America’s Got Talent) and shaving his head and growing silly-looking “soul patches” on his chin.

How wrong I was. 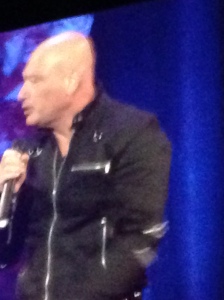 Last night, we had the pleasure of taking in his stand-up routine at Caesars Windsor in their much-vaunted Colosseum room. (Let me say, though, that the room does not live up to the marketing hype, resembling a giant pole barn and with an entrance/egress system that functions more like a giant game of Milton Bradley’s Mousetrap than an efficient/pleasant welcome/farewell to the audience. It is a claustrophobe’s and a process engineer’s nightmare.)

Regardless, Mandel presented a remarkable show, reminding, at least this viewer, what made Mandel great in the first place. His routine on Saturday night was a mix of prepared and improvised material, free-wheeling in its delivery and free-ranging in its topics. With a boyish pluck, Mandel brought down the house, riffing on audience members’ foibles and any information they recklessly volunteered. His silliest and funniest moments came at the expense of two security guards downstage who seemed more interested in staring at each other than in protecting the funnyman. Yet, Mandel was never mean nor cruel; he was ever-playful and as hard on his own eccentricities as those of the targeted audience members. 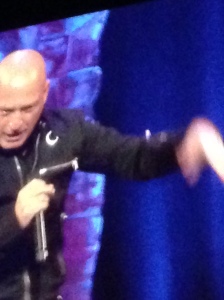 Mandel was plenty “blue” in his material, but it never offended as he comes across more as a little kid laughing at his own farts than a skeezy old man who bullies those around him with dirty jokes. You know the type I mean, right? You’ve seen such pricks (sorry for the colorful euphemism) at your high school reunions or at family picnics? “Hey, you, listen to something really filthy here. Does it make you uncomfortable? Yeah? Good! I win!” Mandel’s not like that at all, thank goodness.

Sadly, the same can’t be said for his tone-deaf opening act Shuli Egar, a correspondent from The Howard Stern Show, who came off as a hateful little creep and who seems to think life is there for his ridicule and contempt. There were pockets of laughter during his set, but mostly it was a pretty flat affair that could be best described as Don Rickles/Cheech & Chong/Ray Romano as re-written by Attila the Hun. My advice to him? Ditch the hipster glasses that make him look like mean bird, make fun of himself more, and let us see his tortured inner life that makes him so despise his outer one. THAT would be interesting. (Let me add – Stern I’ve always loved. See rationale in opening paragraphs above. This toadie of Stern’s? Not so much.)

Back to Mandel. He shared with the audience that earlier on Saturday he had become a grandfather for the first time, and, rather than coming across as cloying or preachy (a la someone like Bill Cosby), he used said news in clever and irreverent ways to introduce such tried and true Mandellian topics as … his omnipresent fear of germs; the torture of being on the road 24/7; his love for his wife as expressed by torturing her daily with public tomfoolery; the highs and lows of being part of nationally beloved reality shows on the Peacock Network (En…BEEEE….Ceee!); and so on.

Seeing Howie Mandel live is an interesting phenomenon. A forgotten comic (at least to me) becomes vital, vibrant, possibly even essential in that setting. The electricity of his intelligence and his wit, the kindness in his heart, and the acerbic view he projects toward this ridiculous planet make him very winning, indeed. I’m sure the TV shows and the merchandise and the appearances rake in the moolah, but here’s hoping the third act of Mandel’s storied career gets him back on stage, alone and live, with no yellow-and-black briefcases full of money nor aspiring warblers from Topeka.

13 thoughts on “No yellow-and-black briefcases full of money nor aspiring warblers from Topeka: Howie Mandel live at Caesars Windsor”