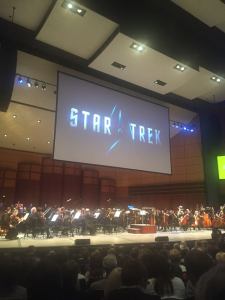 I wasn’t sure what to think of the proposition of watching the Grand Rapids Symphony performing the soundtrack to J.J. Abram’s 2009 Star Trek reboot live while the film played on a screen above. The idea sounded intriguing, but it also sounded like it had the potential for a nerd-centric train wreck. (Star Trek: Live in Concert was the October 17 installment in the Grand Rapids Symphony’s Symphonicboom Series at DeVos Performance Hall.)

Conservative, yuppified Grand Rapids is one of those places that, in my head, is the antithesis of anything a Ann Arbor liberal like me would, could or should enjoy (totally closed-minded of me … I get it).

Yet, when you’re there, it’s all gleaming spires, clean streets, pleasant people (saw a LOT of “Ready for Hillary” and “Feel the Bern” buttons and bumper stickers, so I suspect my prejudices about the region are all kinds of wrong), and well-curated on-street art installations. It’s actually a very nice town.

And the joy of watching a woman dressed in full Klingon regalia sitting right beside a snooty, Eileen Fisher-garbed symphony patron pleased every ounce of my soul.

The performance itself was an amazing experience. For anyone who loves movies and music and appreciates the alchemic power when those two worlds collide, this presentation style is pretty epic and completely moving.

The Grand Rapids Symphony exhibited a precision and a coherence akin to the finest symphony orchestras (not that I’ve heard that many, but these guys are on point). In fact, I rapidly forgot there was even an orchestra on stage (strange praise, I realize), as their fine work blended so seamlessly with the images and dialogue being projected on the screen. Likely, this kind of production is the closest any of us will come to watching an orchestra actually record the soundtrack for a blockbuster film.

Star Trek‘s director J.J. Abrams, much like his inspirations George Lucas and Steven Spielberg and their legendary cinematic partnership with John Williams, has hitched his directorial star to a singular composer: Michael Giacchino. Smart fellow. Giacchino’s fusion of jazz-style sketches and orchestral bombast is as distinctive as it is compelling, an approach that lovingly augments and accentuates Abrams’ reverence for all the Gen X sci fi classics. 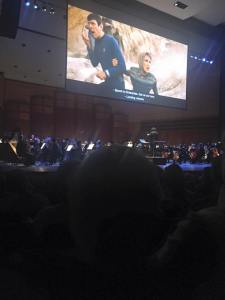 Zachary Quinto as Spock … Winona Ryder as his mom?

I had always had an appreciation for Giacchino’s work (The Incredibles soundtrack is a particular favorite), but, hearing his Star Trek score performed live, I was able to grasp more of its thematic nuance and playful fun (lots of great homages to the classic Star Trek Theme and other incidental cues).

With the benefit of a live orchestra, there were colors and light between the notes that one fails to appreciate seeing the film in its original state. The copious talent of this symphony, guest-conducted by Constantine Kitsopoulus, coupled with their evident respect and delight for Giacchino’s sprightly work, made for a transporting experience.

(No, I’m not going to make a stupid “Beam me up, Scotty” teleporter joke here. Nope. Though I will admit that the performance left me quite “energized” … see what I did there?)

Oh, and the movie itself? That ain’t bad either.

It’s been quite a while since I revisited this particular Star Trek installment, and, much like when I caught The Wizard of Oz again on the big screen at the Michigan Theatre a few years ago, I had an entirely different appreciation.

Not unlike that 1939 classic, this film stands on its own, not just as fantasy, but also as a really funny, super-clever, swashbuckling comedy. Abrams and his exceptional cast appropriately genuflect before their source material but aren’t afraid to work in some winking criticism of the franchise’s cornier, paste-board legacy.

Watching the film again and enjoying Abrams’ kicky reinvention of these campy icons, I am now even more intrigued to see what he does with this December’s Star Wars: The Force Awakens re-launch.

In fact, I was struck by how his Star Trek is a delightfully shameless swipe of Star Wars: A New Hope: a galactic madman (Darth Vader or Nero?) roaming the galaxy, astride a planet-destroying machine (Death Star or Narada?), while a rogues’ gallery of rebellious do-gooders – sparky farm boy (Luke Skywalker or James T. Kirk?), smart-mouthed neo-feminist (Princess Leia or Uhura?), coolly logical mentor (Obi-Wan Kenobi or Spock?), long-in-the-tooth scalawag (Han Solo or Bones McCoy?) – and their various comic sidekicks assemble to destroy the Big Bad and save the day.

Throw in a very Star Trek time travel conundrum, – that has the side benefit of literally rebooting an infinitely marketable, utterly toyetic franchise – and you have a super-sized sci fi Star Wars-ish blockbuster. My comparison may be stretched a bit, and the Star Trek vs. Star Wars people will have all kinds of minutiae upon which they’ll feel the need to correct me, but I think I’m on to something. 🙂

J.J. Abrams’ take on the socially conscious Star Trek mythos is much more Buck Rogers-esque escape than Communist Manifesto-commentary. And that may be why I enjoy it so much, so his version of Star Wars has my curiosity piqued indeed.

Thanks to Lori Rundall for her thoughtful wedding gift of the tickets to see this provocative meld of cinema and live music. If you get a chance to take in such a show, I highly recommend it, regardless the film or the composer or the venue!