Enjoy this quick video synopsis of movies we saw over the Martin Luther King holiday weekend – Paddington, Foxcatcher, Selma, American Sniper. (You can read the full reviews of all four below this entry).

And thanks to The Columbia City Post & Mail for this additional shout-out for the release of Reel Roy Reviews, Vol. 2: Keep ‘Em Coming!

While the marketing campaign makes Paddington look like one of those slapstick, stomach flu-inducing, lowest common denominator kiddie movies like Alvin and the Chipmunks or Smurfs, in reality, it shares more of its DNA with classier fare like Babe: Pig in the City
or The Black Stallion or Willy Wonka and the Chocolate Factory, honoring the intelligence of children and their parents and employing its kid-lit source material as sharp-eyed, warmhearted allegory for our present day sensibilities (and follies).

Ben Whishaw (Skyfall) voices the title bear, taking over for the originally cast Colin Firth.  In between the expert CGI animation of this ursine lad from deepest, darkest Peru and the earnestly winsome vocal work of Whishaw, Paddington is a complete charmer.

He is aided and abetted in the charisma department by luminously winning Sally Hawkins (so excellent in Blue Jasmine) and crusty Hugh Bonneville (Downton Abbey) as the matriarch and patriarch (respectively) of the Brown family who discover the little bear as he desperately waits at Paddington train station with nothing but his signature hat, a tag that reads “please look after this bear,” one marmalade sandwich (for emergencies), and his battered suitcase. He hopes that someone … anyone … will take him “home” (though he isn’t quite sure where … or what … that is). 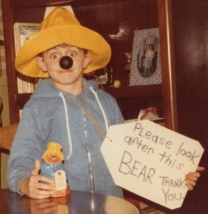 Me as Paddington for Halloween

Paddington and me at Christmas

Based on Michael Bond’s classic book series, the film stays true to the original narrative: a plucky bear is sent from Peru to London after he loses his uncle to an earthquake and after his aunt moves into a “retirement home for bears.” The aunt and uncle had met a world-explorer from England decades prior, and the geographer told them that they would always have a home in London should they so want it.

Paddington’s aunt sends Paddington off on a steamer ship, and eventually he lands in the aforementioned train station (for which he is eventually named). The Browns offer to give Paddington shelter until he can find said explorer, with Mr. Brown reluctantly warming to the little bear’s charms (after Paddington nearly demolishes the Browns’ home trying to understand human domestic customs).

In a deviation from the text, Nicole Kidman (channeling pretty much the same icily harmless villain she portrayed in The Golden Compass) plays a Cruella De Vil-esque taxidermist, anxious to make Paddington part of her collection. The subplot is unnecessary, but ultimately harmless (thank goodness!).

The film’s secret weapon is Hawkins whose genial sweetness toward the lovably inept Paddington had me near tears a half dozen times in the film. Hawkins’ Mrs. Brown is Paddington’s champion (and by extension the champion of anyone who has felt rudderless and sad, well-intentioned but confused at any point in their lives). She gives the film such heart, coupled with a cinematic Paddington whose expressive features convey those of every creature you’ve ever seen forlorn in an animal shelter.

Yes, there is plenty of silliness to keep the youngest audience members enthralled, but blessedly the goofy hijinks are kept to a minimum and always in service to the story, a narrative about making the best family you can with people (human and otherwise) you love and cherish for the spark they bring.

The cast is rounded with a who’s who of classic British talents: Julie Walters as a flinty housekeeper, Jim Broadbent as a twinkly shopkeeper, Peter Capaldi as a nosy neighbor, and Michael Gambon and Imelda Staunton as the voices of Paddington’s uncle and aunt.

Director Paul King, not unlike George Miller and his work on the exquisite Babe films, gives us a film that approximates beautifully the feel of reading a children’s picture book. In just the right amount so as not to seem gimmicky, King employs animation and miniatures (see: his very clever use of a dollhouse in the Browns’ attic) to illustrate and heighten the narrative in ingenious and magical ways. Such sure-handed and thoughtful direction is rarely seen in a film of this nature – he is one to watch.

Ignore the tone-deaf commercials and go see Paddington. It is a delight for the mind and the heart.